Graphite is plotting increments from Logstash in float

I was trying to mimic this logstash.net/docs/1.1.0/tutorials/metrics-from-logs

I have following setup

This setup is working fine since graph is being plotted just fine but not correctly. According to above configuration, I understand the graph step value should be integer but I am getting floating points numbers in Y axis(hits) as per the attached graph and I am completely baffled as to how do i interpret this graph.

I am using following URL API to generate this graph 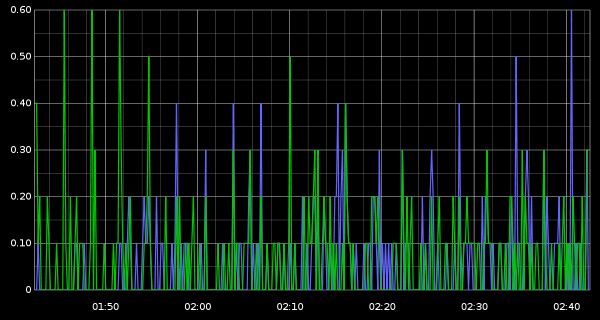 Can somebody point me in right direction as to where to go to remedy my issue ?

Since this is an old question (at the time of this answer), I'm just throwing this here as a reference for anyone else wondering the same thing.

Logstash's cookbook has an entry on understanding Graphite and how the data gets aggregated. See it here

If you happen to be using a newer version of logstash, then you'll have the statsd_count folder, which will give you the number of increments that Graphite received, instead of averaging it out over 10sec. for you.

Per the logstash cookbook entry, assuming you have 3 200 responses within a frame of 10 seconds, statsd would produce something alone the lines of:

However, in the statsd_count folder, you would see something along the lines of: stats_count.logstash.101010_1.apache.site1.response.200 = 3 (we have received 3 times status 200 for our period of 10 seconds)

Values on your graph is not integer, since it is average values.

statsd stores integer values of response counter to show a point on graph it reduces earlier counter value from later and divides it by step time. (Count(t)-count(t-step))/step.

0
how to write a script in statsD to insert metrics information in graphite
4
Statsd, Graphite and graphs
17
Highly-available, Web-accessible and scalable deployment of statsd and graphite
14
How do you delete a counter in graphite whisper?
0
How do I get the Graphite webapp to (re)read what's currently coming from collectd?
1
How can I plot Apache HTTPd status counts in Graphite without Statsd using Logstash?
0
Logstash conditional output to statsd - based on haproxy request URI
0
Aggregate per timestamp datapoints in graphite
1
Aggregating stats from events old and new