Passenger error: No such file or directory - config/environment.rb

I installed Redmine on MacOSX Server 10.6.8 according to this installation description. So far everything works fine: When I start webrick the server serves the Redmine pages. The gems and redmine are installed under the user "redmine".

After that I aimed configuring apache2 with passenger as described here. As suggested by the description I also installed the passenger-pane which stores its virtual host configuration files in /private/etc/apache2/passenger_pane_vhosts. This is what I came up with after a lot of manual try and error. At least, now I can reach a passenger error page.

However, the passenger module still runs into the following errors. 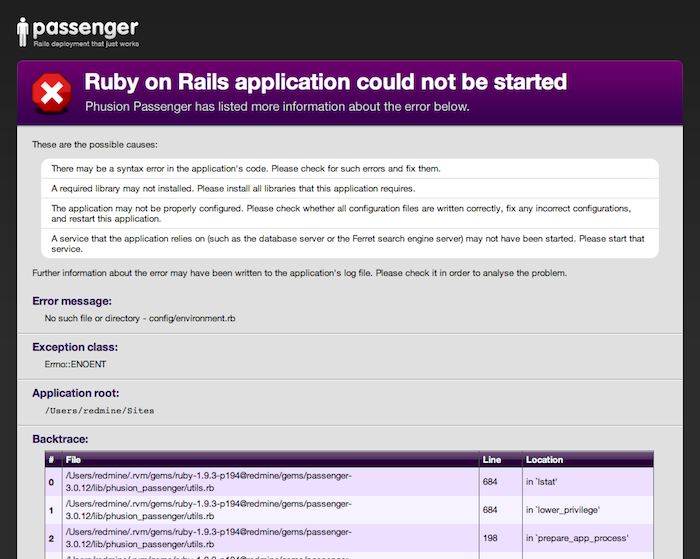 The /var/log/apache2/error_log of the web server stated the following.

I experimented with the user switch functionality of passenger as described in the documentation - as you can tell from my configuration file. Though, I was not successful.

Question: How must I configure the server to get the desired http://myserver/redmine url?

According to the Passenger documentation you have to use the public directory as the document root. In your case this would be /Users/redmine/Sites/redmine/public.

That way, only truly public files are in the document root and Passenger finds the correct application root. You should never put any actual code files (or even worse: configuration files) into the document root as they are freely readable by anyone.

Only for Users, which installed Redmine with the Bitnami-Stack:

I realy wonder, why i got the same Error which described the ThreadOpener after upgrade and restart my OS. The Distribution also had installed apache and mysql, and start this one. BitNami has its own apache- & Mysql-Server inside of the Bundle.

Solution: stop Apache & mysql, and start the BitNami one with:

That solve my problem!

To mount as a /redmine URL, try a

Not the answer you're looking for? Browse other questions tagged apache-2.2 ruby-on-rails mac-osx-server phusion-passenger redmine or ask your own question.

0
Installing redmine on ubuntu 10.10
0
Host Ruby on Rails Tracks on Apache2
1
Rails program is not being run on apache + passenger - only directory listing
2
Passenger on Apache2 - how to make a site appear on root
0
mod-redmine && mod-passenger: Passenger refuses to load (here: Redmine) after rewrite uri. Where to put RailsBaseURI?
0
Redmine on Redhat/CentOS 5 Without using virtual hosts
6
Proper Passenger + Apache Permissions to fix error "No such file or directory - config/environment.rb"
1
Trouble with Passenger/Apache2 - Error 403