We have just purchased a APC rack (model AR204A) with 12-24 threaded holes. We couldn't get a "square hole" model in time for our setup deadline. Unfortunately our rack servers (Lenovo RD240) appear to have 10-32 thumbscrews for securing the server to the rack. We've successfully mounted the server rails to the rack using 12-24 screws however the 10-32 thumbscrews in the server front won't "grab" the 12-24 holes in the rack, thus there is nothing to stop the server from sliding right off the rack if pushed from the back.

The thumb screws on the server don't seem to be removable, so we can't simply use 12-24 screws instead. Any suggestions on how to work around this problem? Is there any way to "convert" a 12-24 hole to a 10-32 thread (or similar approach)?

I think anything you do will require modifying the rack. 12-24 is larger than 10-32, so you can't drill out to that size.

You can drill out to a square hole and add an insert.

You can make use of a helicoil that will allow you to drill out the 12-24 and get an effectively smaller 10-32 hole. Things like this are presently available on Amazon or your local hardware store.

Bribing your local car mechanic to give you a hand is a solid idea for this. They've almost certainly had to place a few in their career.

My suggestion is cheapo, but will do the trick. Don't laugh.

Go to Lowe's/Home Depot and pick up heavy duty double sided velcro tape. Cut the strips narrow to size and then stick them on the rails and server front so that when you push the server into the rack the velcro catches.

This way it takes some effort to pull the server from the rack.

Just to clarify the above. My answer is based on the OP stating he only needed a way to prevent the server from sliding out of the rack if pushed from the back.

As stated by the OP:

We've successfully mounted the server rails to the rack using 12-24 screws however the 10-32 thumbscrews in the server front won't "grab" the 12-24 holes in the rack, thus there is nothing to stop the server from sliding right off the rack if pushed from the back.

Effective... for a server that's on rails, anyway. Velcro has great holding strength at sheer (pull being parallel to the Velcro), but is lousy under an angle or leverage. If your server pivots, it's going to fall in a way that a screw would prevent. So, use it if you're just holding the server to the rack when the weight is already supported. Don't use it to hold something like a switch.

You should have purchased a proper square-hole rack enclosure/frame. It would be a better move long-term as threaded-hole racks are not ideal for mounting servers. Square-holes + cage nuts are more flexible and can accommodate more equipment types.

As for the screws on the server's front bezel/faceplate, chances are that they are meant to mount to the front edge of the rail in a standard square-hole installation. Depending on how you mounted the rail kit to the threaded-hole rack, this may not be possible.

Looking at the installation guide for the rail kit included with the Lenovo server, you would have needed to modify the pins at the front and rear of the rail arms in order to accommodate the threaded holes in your rack. Referencing the image below, you'd remove #1 and #2, leaving a flush surface to mount the rail ears to your rack. The small threaded hole in between #1 and #2 is meant for the captive thumbscrews on the front bezel of your server. That's how the server should stay secured to the rails/rack. I think it depends on you using a flatter-head screw to secure the rail kit to the rack's vertical rails, but the thumbscrew should be able to reach. 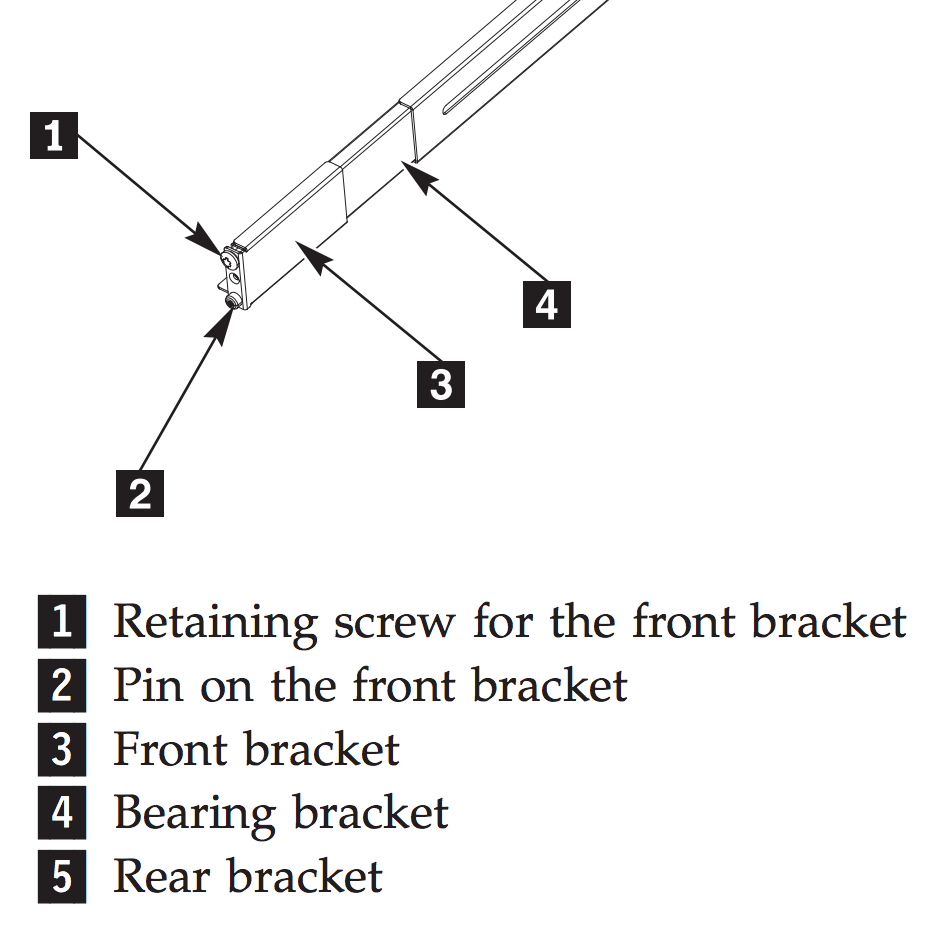 Not the answer you're looking for? Browse other questions tagged hardware rack or ask your own question.

7
Any reason to use a rack-mountable server if I lack a rack to mount it on?
0
Mounting 2.5“ SSD in Antec Atlas 550's 3.5” bay
63
How to extinguish a small fire in a server rack to minimize damage to surrounding equipment?
454
Something is burning in the server room; how can I quickly identify what it is?
1
Generic rails and terminology when specifying rack rail types and dimensions?
0
BYOD to Dell R230 Rack Server