Error when trying to deploy Windows XP SP3 with WDS

I have created a WDS server running Windows Server 2008 R2. I have built my custom images of Windows 7 using WAIK and MDT 2010 that are installed on the server. I used this guide to help me through the process. The Windows 7 images that I have created capture and deploy properly.

I am attempting to follow the same steps from the guide I linked to capture and deploy a Windows XP SP3 image. I am able to sysprep and capture the reference machine with no errors. I am then able to import the custom .wim that I just captured in to MDT 2010 with no issues either. However when I try to deploy this image to a test virtual machine I get the following error: 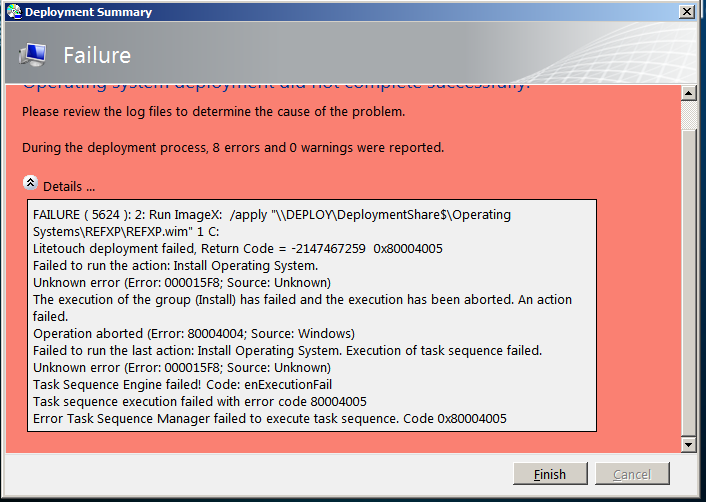 I have made sure that the .iso that I am importing the source files from originally to create the sysprep and capture sequence is indeed a Windows XP SP3 iso.

When I first select a PE boot environment before I deploy I select the x86 PE boot image that I created originally when making this for my Windows 7 deployments. Could this be the issue? If so how do I make a boot image specific for Windows XP SP3 deployments?

I have Googled around for this error and some places point to the deployment image not being able to find setup.exe and other important system files for installing the operating system. If so, how do I add these to the image?

Have you checked the log files? Press F8 when that error screen is up to open a command window. Navigate to x:\minint\smsosd\osdlogs or X:\Windows\temp\BDDLogs (also possibly c:\minint\smsosd\osdlogs) and find the bdd.log and smsts.log files. They should show specific information to help with this error. More information on MDT log files can be found in this blog post