Cleaning soot out of a server

Cleaning dusty servers is one thing - but I have a slightly different problem: Soot in the servers!

During some warm summer months, we needed to open the windows at our server room. Unfortunately, the windows are located directly above the exhaust vent from a diesel heater, and we soon discovered that all our servers were (internally and externally) covered with a fine layer of soot. The soot sorts of "stick" to the surfaces, making cleaning a difficult task to say the least.

I wonder if anyone has any experiences in removing soot when vacuuming / compressed air doesn't work. Some surfaces can easily be cleaned with paper towels / water, but not the circuit boards, fans and power supplies.

I would guess this could also be appliccable to servers salvaged from fires etc.

I actually have salvaged computers from a fire. Isopropyl alcohol and cotton swabs will help you tremendously.

Now that I have a second to post, here's some backstory. About 14 years ago a friend's apartment building caught fire while I was visiting. He lived on the second story and his hallway was blocked by a large pile of flaming debris. He and I jumped out a second-story window onto a mattress that the downstairs neighbors were nice enough to drag out onto the sidewalk. My friend was unhurt. I broke both bones in my lower left leg.

It was a small town, and people knew that I was "into computers", so I did a short but steady business of cleaning up machines that were in the various units around my friend's apartment. (I didn't have much else to do-- I was on break from college and unable to walk effectively.)

The worst machine was probably the computer hosting a dial-up bulletin board system that was in the adjacent unit to the fire and running during the fire. It inhaled quite a bit of smoke and was a sooty, tarry mess inside when I got started on it.

I always warn Customers about fires, and I often cite my own fire experience as reasons for off-site backup. A little over a year ago I received an email from a server computer that I'd installed as part of a subcontract job for a small local IT service provider. I'd configured my email address as a test recipient for hardware notifications and the provider or the Customer never bothered to put in their own addresses. I forwarded the fan failure message to the IT support firm with a note that they should remove my address from the hardware notification service.

The next day I learned that the Customer's building caught fire the prior night and that the email I received came, undoubtably, from a server computer that was inhaling smoke and experiencing fan failures-- running on its UPS (which was keeping the router at the end of the T1 line up) while the building burned up around it. They weren't really big enough to have an EPO attached to their fire suppression system-- we're talking two (2) server computers in a small rack in a closet kinda sized.

I won't make this post any longer, but here are some Cisco switches (and one no-name something-or-other at the top of the picture) post fire. (Click for a larger image) 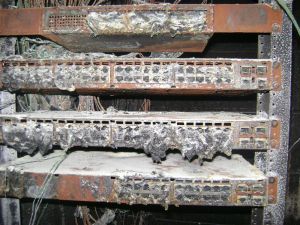 I'm not sure what the best solution to your problem is but using a vacuum cleaner on a server or pc is not a good idea, due to the amount of static they generate. You may not see the effects immediately, but many of the components on the motherboard are easily damaged by ESD.

I would recommend dilute isopropyl alcohol (cut with distilled water about 60/40) and a natural-bristle paint brush. Don't use paper towels/napkins as they will shed fibers. When done, make sure you let it dry completely.

Before you start on a particularly nasty machine, where you might need to remove the motherboard:

If it is really bad, you can use the dishwasher trick, but please:

I salvaged some smoke damaged network equipment after a fire (2 rack mount HP switches), I took them apart, then used a cotton swab and engineering wipes, meths and soap+water on the case and isopryl alcohol on the boards where the build up was particularly bad, I vacuumed the fans.

Came up all ok afterwards, no sign of the fire except a slight smoky odour...

Not the answer you're looking for? Browse other questions tagged physical-environment or ask your own question.

17
Should a backup server use RAID?
1
Is our planned backup strategy adequate for my new server insfrastructure?

16
How to keep your physical server environment manageable
2
What is the process of cleaning viruses from a network?
7
Server Cabinet/Room Cooling
0
finding out heat generated due to applications
6
Air is out in server closet, not going to be fixed until tomorrow… What to do?
102
Cooling Server Closet - No A/C Is Possible
11
How to calculate server room air flow requirements
188
Physically locating the server