Cage nuts - which way to insert them?

Cage nuts can be inserted (in square holes) either with the flaps horizontal or vertical. I've seen and used both methods, but am still not sure which is best. Is there a recommended way of inserting them? If so, why is it the best way? 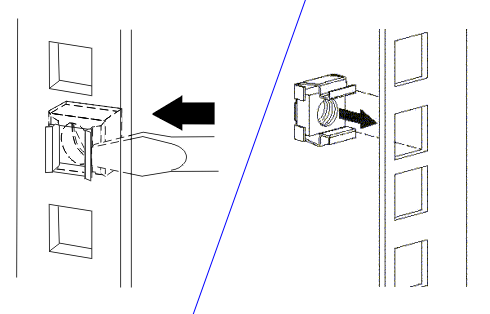 From my own experience, the horizontal way (on the left) seems slightly better for no other reason than making it easier to insert or pry out the cage nut in a full rack (with the units above and below being populated), for example when replacing cage nuts with a snap-in rail.

Edit: Major vendors each seem to have their own preference too:

I've always done them horizontally, because that way you always have clear access to the tang with a screwdriver. If you install them vertically there is potential for good access to the tang to be obscured by equipment above or below, or the top or bottom of the rack.

I suspect it is far better to place them horizontally, so the flaps are in the direction of the force of gravity.

I suspect if you think of it like corrugated cardboard, the flap kinda looks like a single corrugation, then you might see what I am trying to say.. When push on the cardboard from the side it is far more likely to collapse, but if you push on it from the top, it is extremely sturdy.

If the metal uses was extremely weak, or the gravitational forces (weight) acting on it was very strong, it seems to me that the lower flap of the vertical orientation, might bend inward a bit resulting in a cagenut that falls out of the slot. Whereas the

I suppose if your rack had any reason for some side-to-side force acting on it, you might want do it the other way.

I prefer the vertical mounting on the right of your illustration. To remove them I put my thumb on top and my index finger below. I have all of my fingers except for my thumb curled back onto my hand like I'm gripping something. Push down and the nut rolls right out. If it falls it's only going to fall into my palm. I just squeeze to close my fingers and I have it.

I've found that when they are mounted horizontally that sometimes my fingers won't catch them and they go flying, never to be found again (at least until you empty or remove the whole rack). Using a screwdriver makes the "go flying" part even worse.

I've always been told to do it horizontally. This document from APC would also seem to indicate that, though it doesn't say why.

The problem with horizontal is that things mounted that way tend to settle slightly into the height unit below if it is empty, fouling it - if whatever is at another unit lower has been mounted perfectly, getting something in there will need a mallet...

I've found that it's better to mount Cage Nuts vertically.

I had a weird case where (during installation) the weight of the device pulled the top flap of the cage nut down, which caused the cage nut to come loose.

This was mainly due to the fact that the only screws installed were the bottom row (half-way screwed in), with the weight of the device on them.. again, it's a weird situation..

anyway, I had to pull the device out to remount the Cage Nut, so out of curiosity I mounted the Cage Nut vertically and recreated the scenario.. and didn't have the same issue..

so anyway, i vote for vertical..

Horizontally, as depicted above. Always.

First gravity won't affect the clipping in, although this usually is not a problem.

Second its easier to remove cage nuts when there are several ones mounted directly next to each other. When no holes are 'free' things become crowded, no matter if you use your hands (which you should not) or cage nut tools.

21
Economical way to get many harddrives into rack mount?
13
Planning to buy a server with at least 48GB Ram, are the blades way to go?
2
Generic rails and terminology when specifying rack rail types and dimensions?
26
Server won't physically fit in rack: which technical problems will I face in future if I force the mount?
1
What are the considerations which decide the server Dimensions in Rack Servers?