Converting an Ethernet Coupler to a Crossover Adapter

I want to add a crossover to my network toolbox. Aside from an actual an actual crossover cable, I like the idea of an adapter (figure 1). There are crossover adapters available online, but I’m wondering about making one out of an Ethernet coupler (figure 2).

There are plenty of pages that show wiring diagrams for crossover cables, but it’s pretty confusing because there are several different wiring schemes depicted. Further, while it should only be needed with two 10/100 NICs, I want to make sure it doesn’t cause trouble if one or both of the NICs are GbE (I’m worried about damaging a NIC if the wires are not connected correctly).

Can anybody tell me whether there are any caveats about making a crossover from a coupler instead of a cable and which wires should be crossed? 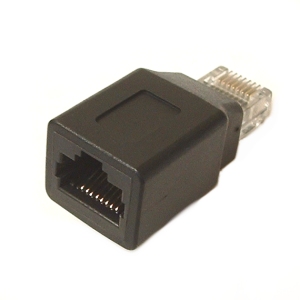 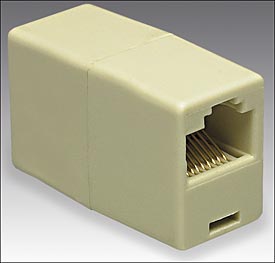 You seem to not be most people. You need to just make sure that these pins have continuity across the coupler:

While I'm certain it's fun and easy to do this yourself... may I suggest you go after something that can do even more?

These can also be had in retail or wholesale quantities at monoprice, cablewholesale, etc... There are definitely non auto-MDI GE ports out there still, especially on network hardware. Keeping a dozen straight and another dozen or so crossover (in different colors!!) makes a lot of sense. What -also- makes a lot of sense is keeping a handful of 6" patch cables handy to both make using these guys easier as well as clearly showing where they are in the line for the next person coming along trying to figure out how X connects to Y.

Crossover cables are useful enough to keep a bunch around.

We get ours in orange, and they're the only cables we get in that colour so they stand out. We get them all 6' long, which is enough to cross-connect ports in our wiring closets, and the few times we need a longer one, we use a straight coupler to connect a normal cable.

Not the answer you're looking for? Browse other questions tagged cable rj45 or ask your own question.

4
5v AC Adapter with multiple outputs?
34
What is the actual difference between Cat-5 and Cat-5e?
11
Why straight-through ethernet cables?
64
Why do ethernet cables have 8 wires?
0
Ethernet wiring of pairs for a 100mbit configuration