Has anyone else experienced this problem?

While browsing folders in explorer over a remote desktop connection, sometimes the file name strings will get corrupted, so they display incorrectly in windows explorer.

Remote desktop (or terminal services) must have some kind of graphical cache for strings, which is being corrupted for particular strings almost at random, especially file names in windows explorer.

I can't reproduce the error on-demand, but once it occurs, you can copy the file name string and paste it other places in explorer, such as the address bar, the "run" dialog, etc... and that exact string will be corrupted there as well. If you type out the string by hand, it also becomes corrupted as soon as you add the final character, even if you type the first part of the string, the last part, and finish by adding the final character... the end result is that once the corrupted string is reestablished, the visual display is wrong (it goes blank, or has the wrong characters).

Who can this be reported to.. it's clearly a nasty bug.

EDIT: A corrupted string seems to manifest itself visually by being replaced with strings from file property dialogs, such as ID strings, words like "Permission" or "Allow", and file paths; perhaps the bug has something to do with displaying file property windows.

EDIT: Added Image Below. If I resize the separator, the strings will change (they end in "...", so it's a different, uncorrupted string, which displays fine. Actually, you can't even capture this as a full-screen image from within remote desktop, because it comes back without the display glitches! Only by restoring the remote desktop window to a window-ized state, and taking a picture of the client desktop with the remote desktop window open is it possible to see this corruption... so perhaps its a client string-rendering issue. 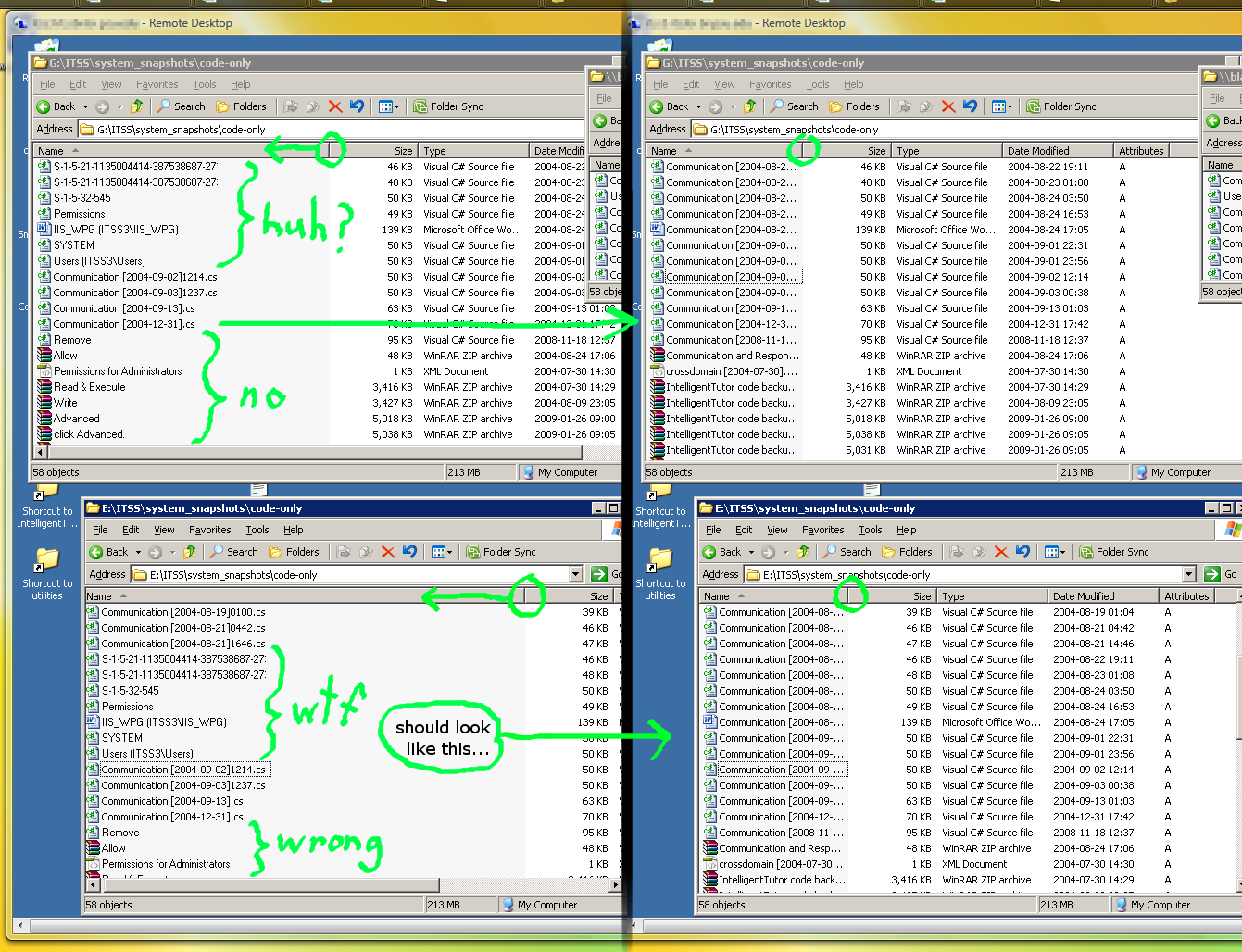 I've absolutely seen what you're describing in RDP sessions to Windows Server 2003 machines. I've been unable to repro the bug and I've probably only seen it 20 - 30 times (out of thousands of RDP sessions), but I've definitely seen it.

I've seen this both in a window and full-screen. I've almost always used the "Low-speed broadband" "Experience" settings, so only bitmap caching and visual styles are enabled.

Yeah this seems to be pretty common on the AWS VMs I've connected to.

Hasn't caused any serious issues though.

I've experienced this in the past. Though, like Evan, it's a rare occurence for me as well.

The files will have a .bmc connection, so these are probably the bitmap cache files it creates. Not sure if clearing these files out will do the trick, but you could give it a shot with no ill effects.

Yes I've seen it too, though rarely, and always under tense/harsh network conditions and a reconnect has always resolved it - so I've thought of it as a glitch due to too much packet loss or similar problem... but it's certainly interesting enough to further explore ^^

I'm not sure this is the fact with RDP (but it sure is with ICA) but as far as I know it the local client simulates most Win32 UI stuff like windows, borders, most text, input textboxes and so forth to speed up the display and only gets told what to draw in many cases (almost like vector graphics), and not sent an actual image for everything (because that would be very slow, like VNC ;). Hence, having a corrupted text string due to troublesome network conditions (or a bug) doesn't seem too unlikely.

I have seen the same issue with the Remote Desktop client on different list views (not limited to Windows Explorer). Some observations:

Does anyone know if there is a Microsoft KBA on this?

As with Larry, Remote Desktop worked just fine for me on XP Pro SP2 (I have several sessions open everyday), and I only started seeing this issue after upgrading to SP3. I see this daily and it's really getting to be annoying, so I'd be interested in any workarounds/fixes that have worked for others.

Not the answer you're looking for? Browse other questions tagged remote-desktop cache corruption explorer or ask your own question.