I want the internal traffic (192.168..) to be routed in one card and the "external" traffic on the other network card.

Currently everything works but I have em0 (internal) connected to the switch and em1(external) directly connected with the external line.

What I would like to do is to connect the external line to the same switch or the netgear router so I can monitor the traffic better.

I know I could purchase a small smart switch with SNMP and it would be solved, but I believe that what I want to achieve is already possible with what I have, I just don't know how to configure it right.

keep in mind that I am converting an old network with 3 servers into one server and I cannot drop nor change the IP addresses for now. The server is also a monitor system for other servers as well as a backup and has a small html page that needs to be accessible from everywhere)

EDIT 2: Let's see if I can explain myself better. Sorry English is not my first language.

Incoming is used for backups, some http traffic, various rsync, and push monitoring (something I wrote, monitoring both ways, checking the outside server and waiting from outside server information not at the same time that the "sent" is done)

If your netgear is not a firewall, your default needs to point to the ISP address on your em1 interface. Your em1 can connect the ISP through the netgear switch as long as the ISP connection is bridged by that switch.

As for "rerouting" to 192.168.1.9, that's called NAT; it's a common feature on firewalls, and it also happens to be in the BSD kernel. I'm not sure why you're configuring so many 192.168.x.x addresses on em0, but it looks a little strange. Other than these points, it's not entirely clear what else you want to do; perhaps this is a good start.

Since you have a real Netgear SRX5308 firewall, you need to simplify your topology.

I am including a link to the Netgear SRX5308 documentation, which I hope helps; I'm a bit concerned that you're getting in over your head, but assuming you've tried to read the docs yourself I will answer whatever questions I can. 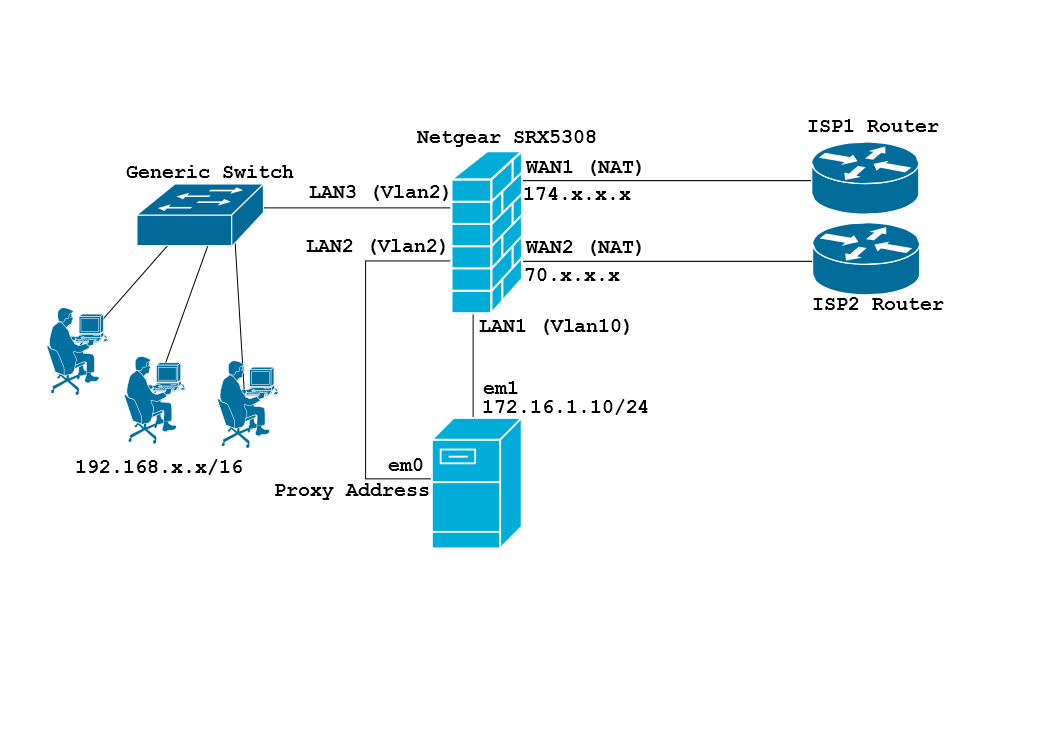 What you've specified in the Question should mostly be possible. I'm just not clear everything you're trying to accomplish.

Not the answer you're looking for? Browse other questions tagged networking router freebsd dmz netgear or ask your own question.

1
Cisco ASA - NATing internal -> internal IP for users on a VPN
2
Ierrs on Network Interface - Pfsense/Freebsd
1
I need some advice to come up with a network plan, or sort of anyway
3
How do I get internal hosts to use a VPN connection set up on a FreeBSD router?
5
Route traffic directly between nodes in a cluster
1
Windows server 2012 two external routes / 2 NICs
2
How to optimize throughput on a linux NAT/router?
1
Forward traffic on same interface