What's the deal with Deno? We talk with a major contributor to find out. Listen now.

PTR records not been created and/or updated

Windows domain, domain and forest functional levels at Windows Server 2003. Windows 2003 and 2008R2 domain controllers. Same for DNS (AD integrated). Dynamic updates on DNS zones are set to "Secure Only". DHCP running on Linux, it is not set the update DNS, clients do.

I am experiencing a weird behavior. If I manually create an A record, a corresponding PTR is properly created. If a client registers an A record, a PTR is not been created, or updated. Even if I go to the client created A record, un-check the "Update associated pointer (PTR) record", apply, check it back, apply and OK. Still, the PTR record is not created.

This is how the reverse lookup zones look under dnsmgmt on the Windows 2003 servers: 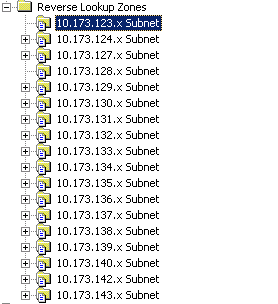 This is how they look on the Windows 2008 server: 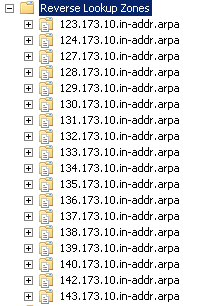 Is there a well known operation problem with having mixed DNS servers (2003 and 2008)? This is driving me crazy, as all PTR were been updated fine until very recently. As a matter of fact, some clients are still successfully updating the PTR, while the majority is not.

It's been a while, but I've seen this. When using DHCP, by default (some/most/all) Windows OS's expect the DHCP server to register the DNS name. If your DHCP server is not doing that, do the following on the client so it will make its own DNS registrations.
Control Panel, Network Adapter, TCP, Properties, Advanced, DNS
Enable checkbox: Register this connection's addresses in DNS
Invoke cmd "ipconfig /registerdns"