How can I split my personal network (with WIFI) from my office network?

I work from my home home office and have a VPN router to my company. I share the same network for my personal and office use. I have a WiFi Access Point, I don't want access to any of my company servers from WiFi for security reasons.

Currently all IP traffic is commingled, and I would like to separate it. Can anyone suggest an affordable configuration, keeping WiFi and Internet access for my personal use, and creating a different network (limited access) for my office use (no WiFi, VPN).

VLANS are not needed here !!!

Simply connect the VPN Router's WAN interface to the home router. Since all the Office traffic should be encrypted by the VPN tunnel, no home traffic would have access to work traffic.

The VPN router SHOULD NOT allow you to talk to your home machines when you are only connected to it in this configuration. If it does, your Network Team should be beaten with a bat. All traffic to the VPN router should be routed through the VPN Tunnel.

The only issue you may have is that you might have to disconnect from WIFI when connecting (via wired) to the VPN router or vice versa. Whether or not this is necessary has to do with your home and work's network configuration as well as your OS's interface metrics (can be changed, but beyond the scope of this question).

It sounds as though your current configuration is backwards. Just to clarify:

Here's how this would look: 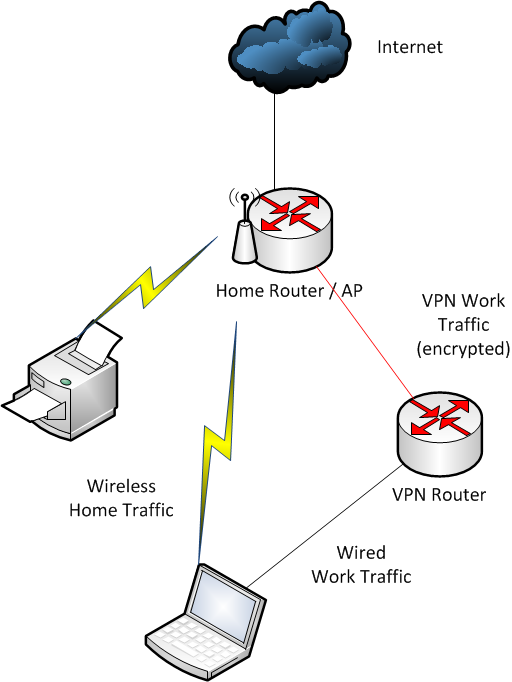 Let me address some previous comments

Throwing a firewall at it doesn't help anything. If you are chaining NAT routers off each other, there is no good way to prevent the ones at the end of the chain from talking to the ones closer to the internet. As far as it is concerned, the office network is PART of the internet.

This is mostly a true statement. The VPN router will be able to talk to any other device closer to the internet. However; nothing behind the router will because of the VPN tunnel. The only thing that the devices on the home network will see are encrypted VPN packets.

This would work..., but is not necessary. We're talking about an encrypted VPN tunnel... Let the VPN do it's business. This IS over thinking it!

Buy a router that is capable of VLAN's Create two seperate VLANS one for Home and one for Work. Buying a router as a 1 time fee is better IMO than paying 2x.

Buy a switch that will support vlans.

Then create the amount of separate networks that you need to have.

You can also use your current router if you have one

This will save you alot of money.

to be more secure without 2 seperate net accounts ; buy a cheap firewall , connect the computers of office to firewall directly and home use computers to the router. You can now configure the detailed settings in firewall web interface. Even set priviledges to all clients seperatly

Not the answer you're looking for? Browse other questions tagged networking router wifi or ask your own question.

0
Restrict destination IPs from a WiFi connection?
1
What do I need to transform my network from Ethernet to WiFi?
6
Should I be on different Channels for this WiFi network?
1
Windows Share Unavailable when Accessing from Wifi
2
WiFi Setup for an Office Environment
1
Wifi slowing down whole network