How to kill a hung service on Windows 2008R2

I have a Windows 2008R2 server running NSClient++. For some reason the service has got its knickers in a twist and stopped responding to Nagios polling.

If I look in Task Manager or tasklist I can now see two instances of nsclient++.exe running.

I tried to kill both of these using:

All of the above were run in an Administrator command prompt.

Other than a reboot which is not really ideal (the box is a fairly mission critical production server), what else can I try?

The server isn't under any resource pressure (memory, CPU, disk etc) and everything running on it is chugging along just fine.

As quick look at the threads tab in SysInternals Process Explorer shows that all of these nsclient++.exe instances are stuck unloading: 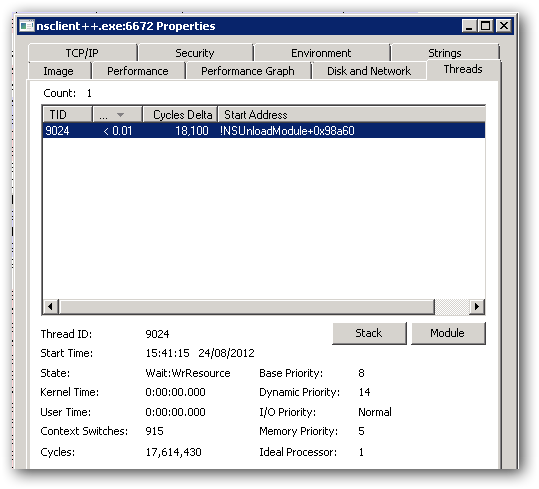 As an aside, I also tried killing all of the TCP connections for these zombie(?) processes (with TCPView) in the hope that I could start a new instance and it would be able to grab port 5666. Then we could reboot the server when things are quieter, but alas that didn't work.

Even though it seems you've figured this out already, the problem is that the process is waiting on the Kernel for something. (This is usually a driver-level problem, but not always.) The only way to kill such a process is to unload the kernel, which, of course, you can't do without rebooting.

Might be worth trying some kernel debugging (does this tool work on 2008 R2?) in the hopes of narrowing down the specific cause or conflict, but your options for handling the problem are either living with it, or rebooting the server to eliminate it.

Is there a reason you haven't considered living with it? If it's just a zombie process, and it's not impacting anything, I'd think you could put off a reboot until a maintenance window or more opportune time. Typically my approach, when the zombie or hung process isn't interfering with anything - take care of it during the next patch cycle or scheduled maintenance window.

Not the answer you're looking for? Browse other questions tagged windows windows-server-2008-r2 windows-service or ask your own question.

281
Useful Command-line Commands on Windows
149
How to add dependency on a Windows Service AFTER the service is installed
1
Windows Service executing an executable
10
How to stop/kill a virtual machine that hangs in “Stopping” state?
83
How do you free up a port being held open by dead process?
3
'pskill \\hostname winlogon' might budge a server “stuck rebooting”, but why?
4
Cant kill process on Windows Server 2008!! - Thread in Wait:Executive State