For L2ARC and ZIL: is it better to have one large SSD for both, or two smaller SSDs? 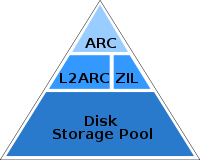 Personally, at home I'm unlikely to use either L2ARC or ZIL with any computer that's available to me. (My everyday computer is a MacBookPro5,2 with 8 GB memory and hybrid Seagate ST750LX003-1AC154. No plans to replace the optical drive with an SSD.)

Elsewhere: at work there'll be some repurposing of kit, but I don't have a date or full details. (Xserve RAID x2 in the mix … at this time I don't imagine giving those to ZFS, but I keep an open mind.)

My curiosity about SSD best practices for both L2ARC and ZIL began whilst following performance-related discussions in the ZEVO area – in particular the topic mentioned below, where a user has both L2ARC and ZIL on a single disk.

Other references and discussions

… not worth the headaches that can occur when trying to manage all 3 on the same disk. For example, if you decide to reinstall and accidentally clobber the contents of the ZIL for your data pool. Don't share disks for pool components or across pools to keep management and recovery simple. …

– I'm more interested in whether it's recommended to not mix two of those things on a single disk.

https://superuser.com/a/238744/84988 (2011-01-28) mentions "cache (L2ARC cache) and write log (ZIL) onto SSD" (singular). However as it relates to FUSE and Windows, I don't treat that answer as particularly relevant to more commonplace and performance-minded uses of ZFS.

Something you need to understand about ZFS: It has two different kinds of cacheing, read and write (L2ARC and ZIL) that are typically housed on SSD's. The ZIL is the write cache. That's probably where this misconception comes from. The ZIL is getting hammered (assuming an active system) with every write that occurs to the zpool. The problem is that using an mlc-based SSD as a ZIL causes them to wear out and fail quite quickly. You need a (much more expensive) slc-based SSD to be used as a ZIL drive.

Having a zpool made up entirely of SSD's is not only possible, but it works quite well. It also basically eliminates the need for separate drives for the ZIL and L2ARC. Yes, you don't have TRIM support, but based on the copy-on-write nature of ZFS, that's probably a good thing.

With that said, ZFS does NOT play well with nearly full (say, 85% or higher) zpools. Performance begins to drop off significantly - regardless of whether you're using rotational magnetic media or solid-state. Lack of TRIM support would probably exacerbate that problem, but it's already a problem.

zevo.getgreenbytes.com • View topic - Performance issue with FW800 connection order? (2012-09-24) is concerned with the order of things on a FireWire bus with a single SSD for ZIL and L2ARC

More specifically: I wondered about interpretations of the white line in the diagram above …

Short answer, since I don't see what problem you're looking to solve...

If you can, use separate devices. This depends on the scale of your environment... If it's just a simple home system or a virtualized or an all-in-one ZFS solution, you can use a single device.

In larger or high-performance ZFS solutions, I use devices suited specifically for their ZIL or L2ARC roles... E.g. STEC ZeusRAM or DDRDrive for ZIL and any enterprise SLC or MLC SAS SSD for L2ARC.

What are you doing?

There are some fundamental misconceptions from the outset about ZIL which need correcting before continuing.

Understand this: Under "normal" circumstances, ZIL/SLOG is not touched.

ZIL is never read from under normal circumstances. It's a disaster recovery feature.

IE: The ZIL is only there for when the power goes off. It's used to replay data which had been acked back to the OS before that data was committed to the pool. All ZFS writes to the pool (sync or async) are from memory buffers.

Under normal circumstances once the data hits the pool, the slog entry is allowed to evaporate - it's just a big circular write buffer and it doesn't need to be very large (even 1GB is overkill in most circumstances)

Non-synchronous writes are buffered in ram, collated and written to disk at an opportune moment. if the power goes off, that data is lost but the FS integrity is maintained (this is why you may want to set sync=always)

On the other hand, L2ARC is heavily hammered at both read and write level.

There's such a thing as "too much l2arc", because the metadata for what's in l2arc comes out of your ARC ram (ie, if you boost l2arc size you must boost ram to suit. Failure to do so can result in severe performance degradation and eventually l2arc usage will level off at some level well below "all the available space")

Despite the protestations of some manufacturers, you cannot make up a memory shortfall by boosting the l2arc sizes (Several makers of hardware raid arrays who've branched into ZFS appliances have made this assumption)

tl;dr: If your IO load is database activity then ZIL is likely to be slammed hard. If it's anything else then it is likely that it will only be lightly touched. It's highly likely that in 99.9% of activity ZIL functions never kick in.

23
Hosting a ZFS server as a virtual guest
5
Disk IO slow on ESXi, even slower on a VM (freeNAS + iSCSI)
4
ZFS - how to partition SSD for ZIL or L2ARC use?

6
ZFS with L2ARC (SSD) slower for random seeks than without L2ARC
1
how many disks can saturate a 6GSAS controller ? :LSI 9260-8i
2
smartOS HPC config suggestion
22
How effective is LSI CacheCade SSD storage tiering?
3
NexentaStor: how to partition SSD disk?
2
Can I use ZFS to replicate (fast) EC2 instance store to (slow) EBS store?
1
Windows Server 2012 and recognizing RAIDed SSDs as an SSD
54
What is the current state (2016) of SSDs in RAID?
6
How to overprovision an SSD for holding a smaller ZFS volume (ZVOL)?