What would cause this file transfer slowdown?

This screenshot is of me transferring a large file (a .VHD) from one logical volume (made of 2 spindles in RAID0) to another one (made of 2 spindles in RAID0) on the same physical machine. (This is not production so don't worry about the sanity of that hardware configuration.) I initiated the transfer via explorer.exe on a third machine on the same LAN, so some TCP protocol may be implicated in the crime here; I don't know.

As the file transfer starts, it peaks out at around 220MB/sec, which is the speed I would expect from a volume to volume transfer on this machine, and then right about 50% of the way through, it drops down to around 50-75MB/s and finishes out at around that rate. 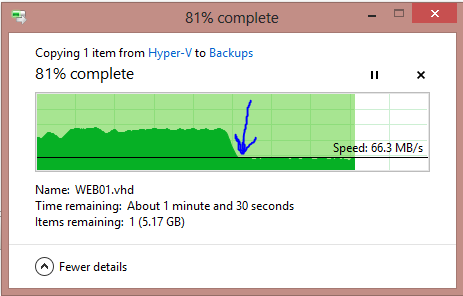 Any ideas as to why the file transfer rate from volume to volume consistently halves half way through the transfer? I tested the same transfer a few times and got the exact same behavior each time.

EDIT: I have tested this again by using robocopy instead of Explorer. I'm using a different file but I'm still initiating the copy from a third workstation: 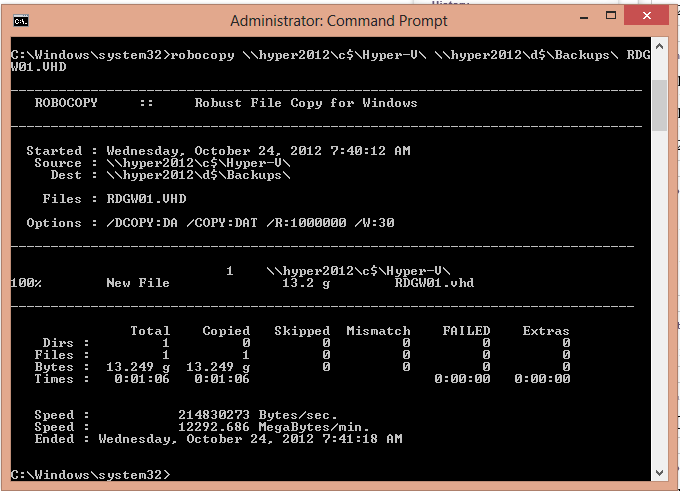 I did not observe the drastic slowdown about halfway through the file copy using robocopy, however, if you look at the transfer speed at the end, it is still well above the theoretical limit of gigabit Ethernet.

EDIT #2: Here's the same transfer viewed through Explorer. There's no slowdown with this file. The only difference is that this VHD is about half the size of the first one: 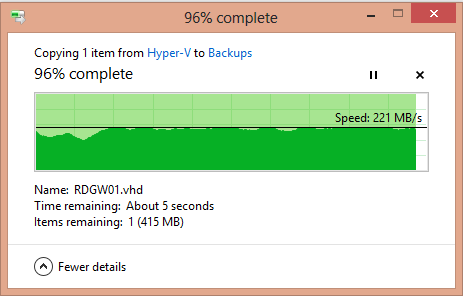 Consistent evidence from two different tools that the file copy speed is faster than what GigE should be able to provide, so I'm still not convinced that the transfer is going over the network. But I still have no idea why the bigger file in the beginning would suffer from the slowdown halfway through the transfer. Perhaps there are two many variables/factors in this experiment.

The transfer is going over the network. Assuming these desktops are all connected via Gigabit Ethernet, 60-70MB/s is a fairly typical speed for file transfers. The "third desktop" you mentioned doesn't know or care that the two shares are on the same physical box. All it knows is that it's copying from share A (the source RAID0) to share B (the destination RAID0) and that these are both network destinations.

The fix is simple: Use Remote Desktop to log in to the box with the RAID0 arrays and initiate the file copy that way.

Not the answer you're looking for? Browse other questions tagged windows networking hardware or ask your own question.

611
How do you find what process is holding a file open in Windows?
281
Useful Command-line Commands on Windows
10
Quickest way of moving a large number of files?
16
VHD network file transfer fails consistently at 4GB
2
Robocopy and NTFS Permissions
0
How to copy many files within Windows LAN through ssh fast
10
Why do "net use" and windows "map network drive" share have a drastic speed difference?
1
Slow file transfer speeds