NFS-Root not working when booting over PXE

I am desperately trying to get a diskless client running over PXE-Boot using a NFS-Share as a root file system. I did this before some years ago but for some reason I am stucked at this since days.

The TFTP-Server itself is running fine and booting a netinstaller works also fine. The kernel and initrd are loaded also but the bootprocess stops with this (screenshot) kernel panic. 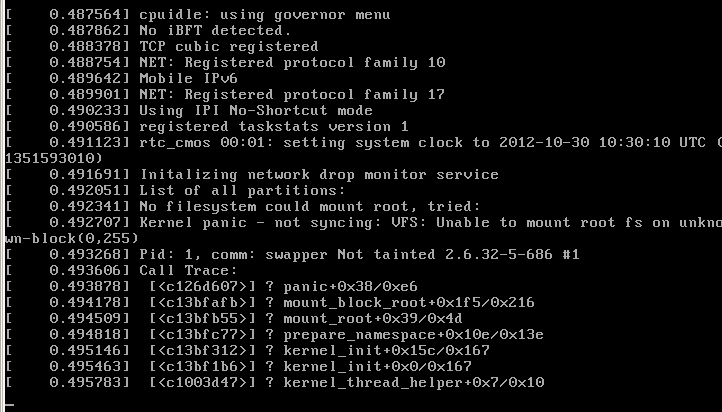 I'm using the squeeze standard i386-Kernel and I have prepared the initrd with this config:

with the same outcome.

Furthermore I have captured the network communication of the client via tcpdump and learned that the client isn't even trying to connect to the NFS-share.

Does anybody has got an idea what is going wrong here?

you are trying to load as initrd what in fact is the KERNEL; see the kernel line. That's why when the kernel tries to mount a kernel copy as the initial ram disk it panics... correct that line and you'll be fine

Not the answer you're looking for? Browse other questions tagged nfs debian-squeeze pxe-boot tftp initramfs or ask your own question.