Why can't all zeros in the host portion of IP address be used for a host?

To summarise, my questions are:

Is an IP packet's destination ever set to the subnet IP address?

Yes. It is a valid IP so it can be used.

If yes, in what cases and why?

If no, then why not free up that address for any host to use?

If you have ancient hardware then you need to check if it uses the first or the last address as network address. (.0 or .255 for networks with mask FF.FF.FF.00)

This makes it a good habit to skip that IP. And habits learned long ago are hard to ignore.

And people who do not know the background do not use it 'because other do not use it either, so it must be wrong to use it' or because they do not realise that '0' can be a first number.

[Edit] Grezzo just tested it on Windows XP where windows network GUI 'helpfully' prevented this setting. Windows 7 has the same behaviour. I then tried it on a non-windows host where it just works. If you use windows then you might have to configure your network manually via IPconfig to set it to all zeros. 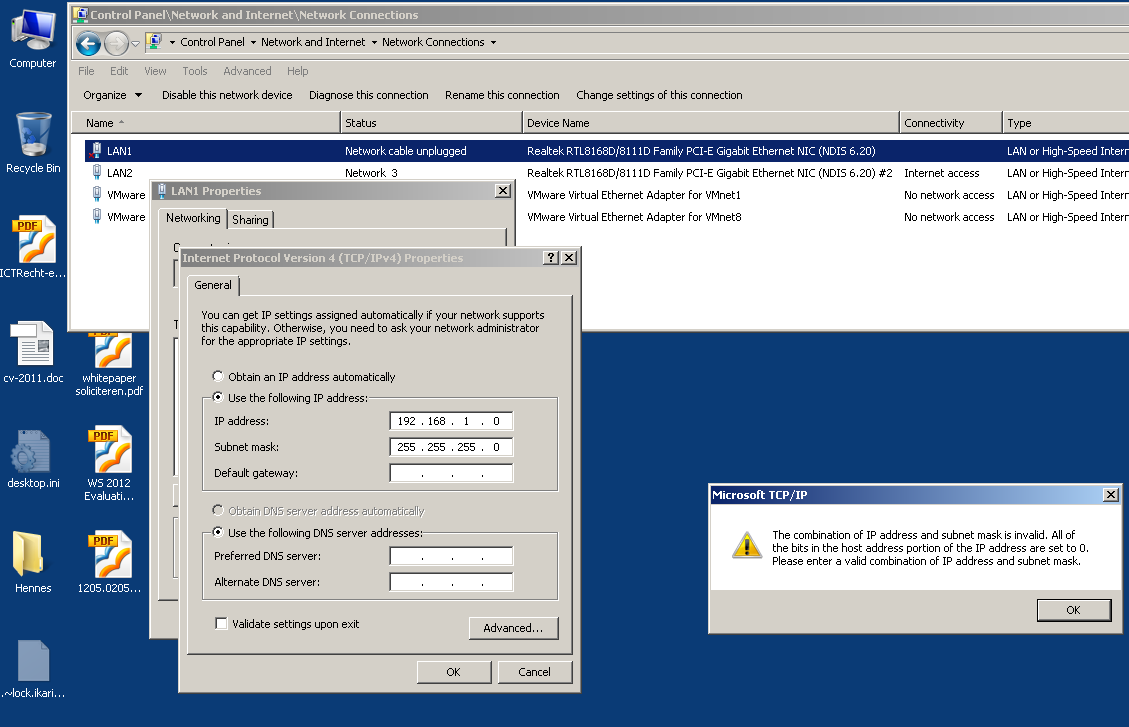 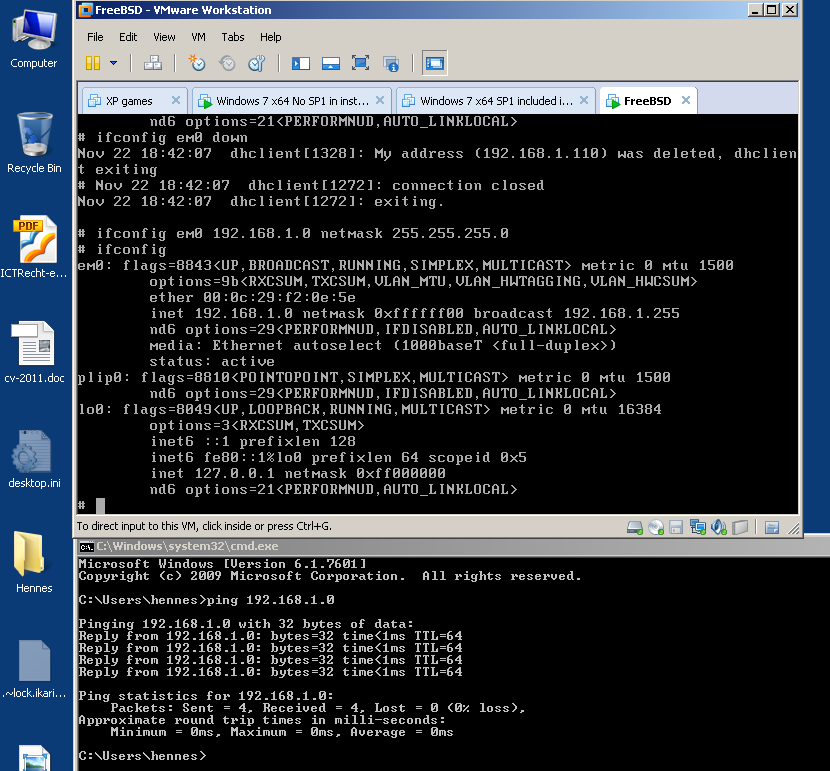 The longer I work with this the more confused I get.

Rfc4632 - Classless Inter-domain Routing does not seem to forbid it, but neither allows it explicitly.

This ServerFault post mentions: "For historical reasons many OSes treat the first address as a broadcast. For example, pinging x.x.x.0 from OS X, Linux, and Solaris on my local (/24) network gets responses. Windows doesn't let you ping the first address by default but you might be able to enable it using the SetIPUseZeroBroadcast WMI method. I wonder if you could get away with using .0 as a host address on an all-Windows network.".

It is the same question, but not an answer.

One more link to the same question. It seems somewhat popular on stack exchange:

Destination_IP is probably ANDed with the network mast (a fast operation in hardware) before being compared to the entries in the routing tables. But:

I believe the first documentation of that comes from RFC950 which references RFC943 (which obsoleted RFC923 above but uses the same language for special addresses):

An address with an all-zero host portion refers to the network itself, rather than to any particular host.

Historically, this zero host address has served as an alternative broadcast address, and devices still respond that way.

So, I have to disagree with some other answers: no, zero is not a perfectly usable host address. If you need more than 254 addresses, you have to create a larger subnet.

If I assigned the .0 address to some host, I wouldn't be able to ping it without the router chiming in with its responses also. And as you can see, some tools like that router's version of ping treat 0 as a broadcast.

You can bend the rules, if you're willing to patch all protocol stacks and other software which is affected by such a bending. Otherwise, stick to the rules.

I worked at a company which designed a network node built in a 14 slot chassis, running numerous independent OS images on several types of cards, all communicating via a backplane. There was a networking setup over the backplane with a convention that 127.X.0.Y is the internal IP address of node Y in slot X, all numbered from 1.

We basically subnetted the loopback address for our own purposes. To make it work, we had to patch the Linux kernel here and there, and IIRC, a little bit of user space.

Since that network was only used within the box, and most programs that require loopback use the 127.0.* network (and in fact the specific address 127.0.0.1) which continued to work normally, everything was cool.

Sounds like there is a little confusion here with basic networking.

The 'ancient hardware' referred to in one of the responses would not use IP Subnet Zero - using ip address x.x.x.0 with a network set up for a /24 CIDR or 255.255.255.0 subnet mask is a different issue completely.

Both the network address and the broadcast address are reserved and cannot (by current and previous network standards) be assigned to a device. Using x.x.x.0 for a host address on a /24 system is wrong. Even if Linux lets you use it does not mean that it is right, it just means that Linux thinks that you know what you are doing.

If your system is letting you assign x.x.x.0 as an IP4 address to a host and it appears to be working - chances are that particular host is receiving ALL traffic targeted to ANY device on that network so its networking is probably not working optimally.

IP addresses are not permitted to have the value 0 or -1 for any of the < Host-number>, < Network-number>, or < Subnet- number> fields

Actually the answer is the basic of subnetting. The "all zeros" IP of your subnet combined with the network id is used to calculate where the packet has to be sent to.

In your example you have a subnet of 255.255.255.0. Any device that knows the TCP/IP protocol will use the netmask combined with the IP address to calculate if the packet is destined for the local network (by performing a logical AND operation) or that it has to be sent trough the gateway / router.

So I guess the reason that IP can not be used is because it is already used to "define" the network boundaries together with the netmask by design.

It was requested that I repost my answer from NetworkEngineering, so I will do so with some modification for this site.

In RFC919, it makes reference of the general acceptance of the network address:

This provides a convention that should clarify our understanding if someone were to mention "10.1.2.0" as the network and not a host on the network.

From there, the use of "0" in a IP addresss was defined in RFC923 and carried over in successive RFCs:

This example provides for a specific host on the current network (0.0.0.37) by using 0's in the network portions of the address, but it doesn't actually clarify the opposite case (0's in the host portion of the address). However as it did define "0" as "this."

Since all zeroes for the host part of the address meant "this host," it logically follows that it is unusable as a host address.

Getting back to directly answering your questions:

According to what I find in the RFCs, this should not be used. I will admit it isn't as clearly specified as I would like, but that is all to common in many standards. When the standards are a bit less firm on a point, the industry then seems to "settle" into a generally accepted interpretation.

Further, based on the content of the RFCs software may be written to assume that this address is used to address the network and not a particular host. Or even more literally as some sort of "loopback" (i.e. this host on the specified network).

So why do some OSes clearly allow it's use? I would imagine like many things that it comes down to developer time/resources or no one really thought to add the validity check. The logic has to be a bit more involved than "if it ends in 0" as a larger subnet (a /23 or larger) will contain valid IP address of .255 and .0 (i.e. 10.1.2.0/23 contains both valid IP address of 10.1.2.255 and 10.1.3.0). Although some organizations do also avoid the use of those valid address in larger subnets to avoid any odd issues with software that doesn't support modern subnetting correctly.

As to why not free up that one IP address, it simply comes down to cost/benefit. It would take a lot of time and effort to make this change to get back one IP address per subnet and in how many cases where you need additional IP addresses, will only one address be enough? It is much easier to add a second subnet or enlarge the current subnet, potentially giving you many addresses to use instead of just one while making no major changes to any software/hardware in place.

First, it is worth noting that all-zero addresses in IPv6 are defined by RFC4291 as "Required Anycast Address" which are addresses that at least one router on a segment, but not necessarily all of them, will answer to. (Anycast addresses in both IPv6 and IPv4 can have non-zero host portions.) So the answer is definitively "no" for IPv6 unless you are using it to provide anycast services.

As mentioned in other answers it is not safe to use these IPv4 addresses as host addresses on a broadcast medium: for historical reasons many hosts will respond to packets with these addresses as though they were broadcast packets. However, it is also not safe to ban use of these addresses upstream even if you have a clear indication (from a routing entry) that the address is at the bottom of a subnet... the address may be used on a non-broadcast subnet like a NAT pool, or a /31 used as a router wire address. This means anti-"smurf"-like DoS protections belong if at all possible on the directly connected router, which should know if the media is or is not a broadcast domain. And these protections are present in the usual case, so that's a second reason why using these addresses as unicast addresses on broadcast media will not work: no traffic from off-segment may be allowed to reach them by the router.

If one were to extrapolate from RFC923, a zero host would be "This host on a particular network". It's not safe to make that extrapolation because the RFC only addresses the network address, not the host address. However it is conceivable that some IP address negotiation protocol may have been been deployed where a host knows the subnet it wants to belong to, but does not know its host address and is asking for autoconfiguration on that particular network by specifying a zero host address. That is another possible interpretation to look out for.

According to RFC1812 4.2.3.1, A router SHOULD silently discard on receipt (i.e., do not even deliver to applications in the router) any packet addressed to 0.0.0.0 or { <Network-prefix>, 0 }. If these packets are not silently discarded, they MUST be treated as IP broadcasts. There MAY be a configuration option to allow receipt of these packets. This option SHOULD default to discarding them.

Thus all 0 bits host number can't be used for a host.

FYI, all 0 bits host number is a non-standard IP broadcast addresses, above requirement in RFC1812 is mainly for historical reason.

In addition, RFC3021 creates an exception for /31 network, allow all 1 bits and all 0 bits host number.

0
What netmask should be used on an aliased address in same subnet as the primary IP?
4
What is the proper netmask for an alias IP address?
4
My static ips are inaccessible only from CenturyLink users across all ports