I am shipping a bunch of ESXi 5.1 servers to remote offices where they will be powered via APC UPS.

I would like to have the UPS trigger a shutdown of the connected server - I would then rely on the ESXi configuration to take care of the shutdown/suspension of the VMs hosted on it.

I can see that APC have a solution documented using their PowerChute Network Shutdown, but this involves setting up an extra server per office, and requires network cards on each UPS. We are generally using UPS without a network card (e.g. Back-UPS Pro) - they come with a USB connector, and they are readily available in the locations where our offices are.

How can I connect a UPS to a ESXi host via USB, then have ESXi detect a power outage and then act accordingly? Has anyone managed to do this.

According to APC, this is not possible and you require Powerchute Network shutdown. We tried this a number of times with USB and found no solution.

VMWare has info here on using the APC approved solution.

Would also think SmartUPS would be a better choice and you can fit with network card. Naturally more money but if your servers are at all important, that cost should be worth it. Also gives you more monitoring and alerting which might be useful at a remote site. You also need to assure sufficient runtime for all VMs to cleanly shutdown and then shutdown the host

Yes, it's possible. Here are details of my similar setup.

Hardware configuration: APC Smart-UPS 1500 connected to the ESXi 5.1 Host via USB. A Linux virtual machine running on this ESXi host. UPS is connected to this VM using ESXi USB pass through option.

The NUT for Linux could be installed from package.

The native NUT client for ESXi server can be downloaded using last link on this page: http://www.networkupstools.org/download.html

Some my scripts and conf files are here (only changed lines are shown): http://pastebin.com/KkEeanK1

Of course there are more details, and it took some time for me to make this working as it should. But now it performs very nicely. This system accounts for the cases when you just shutdown the monitoring VM from inside (vmware-tools script is not run), or if it's a ESXi host initiated VM shutdown (no /etc/killpower flag, so no UPS load off), or if it's a ESXi shutdown (the same). The only important is to have this VM running ASAP after host boot, and shutdown it last (so host down time is predictable - as said above, it is around 1 minute for me and 2 more minutes I reserve just in case).

My UPS monitoring Linux VM is also Samba/NFS sharing server for backup storage, the NAT/DHCP server for VMs, and some other light-weight services. It takes around 22MHz of ESXi CPU shares and around 10MB of active RAM when idle. Due to using the NUT you can power more devices from the same UPS if required, and all they can be shut down gracefully. No PowerChute and/or expensive Network Monitor Card is required.

Super question. It is actually possible to do this quite nicely - at least on some setups. I have tried the following recipe on a number of ESXi 5.5 hosts. Basically, the solution goes like this:

Once you have these things running, the doshutdown scriptlet from step 8 gets invoked on a power failure. This is turn invokes the shutdown.sh script on the ESXi host, which signals the VMWare Tools package in each VM on your host to do a clean shut down via the guest OS. In my experience, it works better than the PowerChute software from APC.

If you like to monitor things from your VMs, you can setup slave apcupsd instances on them that connect to the master UPS control Linux VM. Your slave apcupsd.conf files should have an entry like this:
UPSTYPE net < your UPS control VM IP >:3551
Entries like UPSCABLE and such do not matter in this case. This works with the Windows version of apcupsd (available here) as well. You can use the included apctray.exe to check out the current status of things.

That pretty much covers it, I think.

You might consider using the USB device passthrough functionality to a guest running PowerChute or other software able to monitor the UPS's health and capable of triggering a shutdown on the ESXi host (e.g. apcupsd). ESXi officially only supports a very limited number of USB devices for passthrough, but people have been attaching and passing through different classes of devices for a while already with varying success, but the APC UPS USB seems to work according to this walkthrough for a Windows VM or this one for a CentOS Linux VM.

Have a look at vSphere Management Assistant (vMA) from here We use it at my office for doing what you are attempting, however with Smart-UPS connected via USB rather than Back-UPS.

While possible (probably/generally), I don't think an automated shutdown of a computer on battery power is a good idea. If you're going to do that, then for most practical intent and purposes, you should probably just save yourself the money of a battery-backed UPS, and let the loss of power shut down your machine for you. (Granted, a clean shut down is always preferable to a power loss, but you seem to be missing out on the point of having a battery time of longer than a couple minutes if you automatically shut every thing down when you lose the power feed.)

The way I've always handled it is to have monitoring alert the SAs when the power goes down, so the SAs can use their grey-matter to decide when (or even if) to shut down the servers. If it's a brief outage, it may not be a good idea to shutdown the servers at all, or you may want to leave some servers up and running as long as possible, and only shut them down before the battery's about to die. Really seems to me like a decision-making task better suited for a human than a simple rule.

In the olden days of baremetal installations, APC PowerChute Plus was an essential part of my install process. Using the simple serial signaling cable and their Red Hat-only binary, it was easy to setup rules to govern a locally-attached server. Basic email notifications for UPC battery events, line power events and shutdown actions were available:

Plus a reasonable interface to see what was happening... 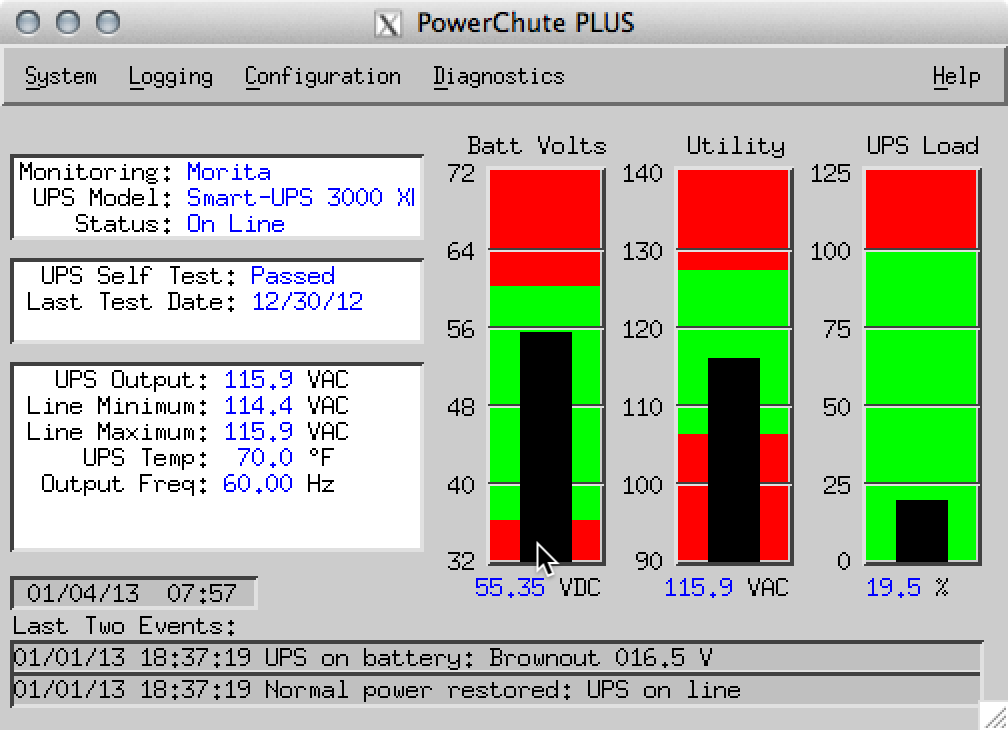 That software eventually went commercial (or was buried on the APC website). There were a few open-source approaches to provide something similar. But this all gets complicated with single VMWare ESXi hosts.

It seems like this is something that VMWare should have incorporated into the base hypervisor. It's basic and could offer a decent level of protection for users. The most common remedies I see now are USB passthrough to a dedicated VM, a network daemon approach or doing what I do; not configuring any automatic or battery shutdown...

Granted, I typically go with a UPS that can support the system load for an hour or more, but extended outages DO happen. Maybe an alternative is to collect a few low-cost or refurbished network interface cards and plan to buy SmartUPS devices as a minimum...

Check out the following link. Not the most elegant solution, but a very practical, very straightforward solution. There are possible drawbacks in terms of security (depending upon your particular network design, the guests loaded on the Hosts, and the access users have to those guests but you get to make that call.

I used MrMajestyk solution and only changed the ssh access via plink with ssh access without password using rsa public key. The rsa key generated in the apcupsd VM must be included in /etc/ssh/keys-root/authorized_keys of the vmware host.

74
How should an IT department choose a standard Linux distribution?
32
When deploying a single server on new hardware, do you virtualize it or not?
56
Assessing equipment damage following a lightning strike - Should I have planned more?
3
PowerChute vMA server shuts down ESXi host after boot
2
iSCSI Datastores not found after Power Failure

0
How can I shut down all my Virtual Machines when my UPS kicks in?
6
APC Smart-UPS: remote power shutoff?
17
How to wake a server after UPS Shuts it down when Mains power is restored?
4
How do I inform my ESXi 5 host(s) of a power outage?
4
How common are Intel igb NIC drivers/cards, compared to Intel e1000, etc.?
3
PowerChute vMA server shuts down ESXi host after boot