Then I downloaded the SQL Server 2008 R2 RTM - Management Studio Express from here and tried to update the MSE. It raised the following error!

Now, there is a folder for R2 in 'Programs' of Start menu. 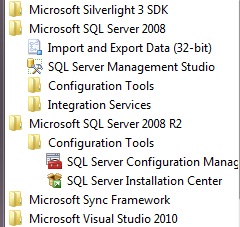 What should I do? (my main goal is to restore the database!)

(The backup was created in a 64 bit machine while the machine I'm currently working (trying to restore the DB) is a 32 bit one; and I used the correct versions (x86) of setups - server and management studio.)

There certainly may be issues with 64 bit versions versus 32 and trying to restore backwards. You might ultimately find the best solution is to build a temporary 64 bit 2008 r2 virtual machine or clone an existing known good box to do your restore. Instead of trying to force these types of products to your bidding, I've had less frustration doing it the "ms" way.