I have a 24 cores/ 48 GB RAM server machine on which I want to set processor affinity for worker process to last 12 cores through IIS Advance settings, is there any formula, i don't want to set affinity through task manager as this pool is recycled quite often.

Specifies the hexadecimal processor mask for multi-processor computers, which indicates to which CPU the worker processes in an application pool should be bound. Before this property takes effect, the smpAffinitized attribute must be set to true for the application pool.

Note: Do not set this property to 0. Doing so disables symmetric multiprocessing (SMP) affinity and creates an error condition. This means that processes running on one CPU will not remain affiliated with that CPU throughout their lifetime.

Processor identification goes from right to left. Starts at processor 0. To set the affinity to the last 12 processors:

Then you convert that to hex:

I have made a chart for each NUMA node affinity. Hope someone could benefit from it. 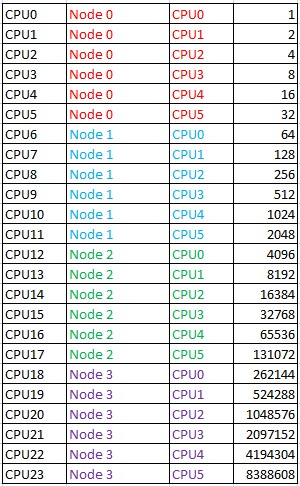 Not the answer you're looking for? Browse other questions tagged windows-server-2008-r2 iis-7.5 central-processing-unit or ask your own question.

0
Edit .NET 4.0 Machine Key settings at a computer wide level in IIS 7.0
1
Hyper-V not scaling processor access for Windows Server 2000 VM
86
What should I do to make sure that IIS does not recycle my application?
2
IIS 7 AppPool logs an error after recycle due to inactivity
3
Windows Server 2008 R2 CPU usage and Physical CPU
1
Bad IIS 7.5 performance on webserver
25
IIS 7.5 - Disable Overlapped Recycle property not being obeyed when web.config is updated
2
Configure IIS 7.5 website to never shut down
1
Numbering scheme for CPU affinity
0
Why does IIS recycle my application pool every 15 minutes?