I have a remote client machine that is sending out DHCPDISCOVER's. The server is responding with a DHCPOFFER, but there is no DHCPACK.

This repeats about every 30 seconds from the same host. Is there something I can do remotely or do I need to get someone to reboot it? It's in a data centre so I may have to travel there to do it!

Thanks for the suggestions. I've had all the machines rebooted, but I still have issues. I think there is an issue with my configuration. Does this look correct?

You you are missing the DHCPREQUEST before the DHCPACK in your description.

I'd investigate connectivity issues related to the DHCPOFFER. Track it and see if it finds its way back to the client and if it does, why is the client not DHCPREQUEST:ing the address.

A common dhcp relay agent is the "ip helper-address" option in cisco switches under a specific interface.

Supposing your DHCP-server and DHCP-client are both connected to the same ethernet segment, and supposing such ethernet segment spans several L2-switches interconnected with various "trunk" (802.1q) links, I've run into similar issues when there was a mismatch between the configuration of at least one trunk link. 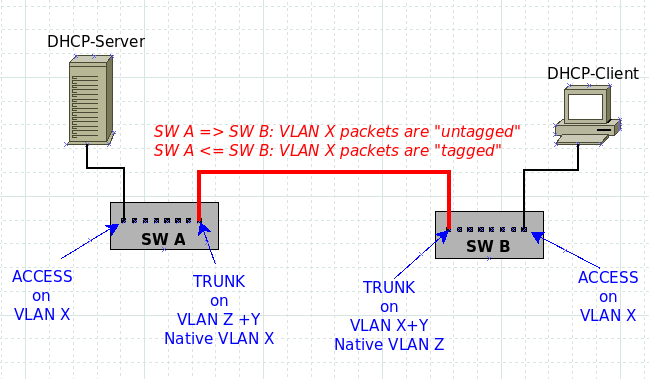 the wrong/mismatched setup of the two trunk ports means that:

This is very easy to troubleshoot, if you "control" the DHCP-Client host. In such a case, supposing eth0 is the network interface used by the DHCP-client host, a simple:

will show if the client receive the DHCP-OFFER from the DHCP-SERVER, or not.

Things are more difficult to troubleshoot if you can not control the client-side.

P.S.: Obviously problems above, as well as other related arguments, can be easily avoided used proper technologies (like GVRP, VTP or other not-strictly-manual-config-approach) but... this is out of the scope of this answer

Had the same issue. Not seeing any DHCPACKs. Problem here was:

dhcpd could not write to /var/lib/dhcp/dhcpd.leases.

I've seen this a few times and so far I've seen only two reasons:

Fortunately both should be easy to test. Ping the IP address and check relevant firewalls.

I've been learning about firewalls using virtual box and I had a similar issue not getting the DHCPACK on the server and it turned out that was using the wrong virtual box network settings for the test green (internal) network for a ubuntu firewall vm and a test ubuntu client vm. If you use the NAT network rather than vb internal network the client vm gets its ip from vb rather than the DHCP server vm. The logs show the server getting the request from the client but the client gets its ip from vb instead so you never get an ACK sent back to the server.

For me it was a simple of case of forgetting to turn off the DHCP server (via Internet Sharing) on the client. As soon as I turned that off, the DHCP lease was accepted:

Not the answer you're looking for? Browse other questions tagged linux isc-dhcp dhcpd or ask your own question.

6
Fixed and dynamic IPs in ISC DHPD lead to double lease
1
Setting up ISC-DHCP server getting DHCPDISCOVER, DHCPOFFER constantly
3
Fixed dhcp host to automatically expire any lease
0
DHCP renew fails with multiple subnets on same link
1
Is it possible to declare two ethernet interfaces for the same host in dhcpd.conf?
0
ISC-DHCPd how to assign different DHCP settings even if request originated from different subnet?
1
isc-dhcp-server: Using option dhcp-client-identifier in host declaration to identify a client
0
Define multiple filename options in DHCP config based on different range