How to know which application is consuming the ram?

I have the following process list and memory consumption (reported thru process explorer) on a 2008 R2 server with SQL, TFS and some other tools: 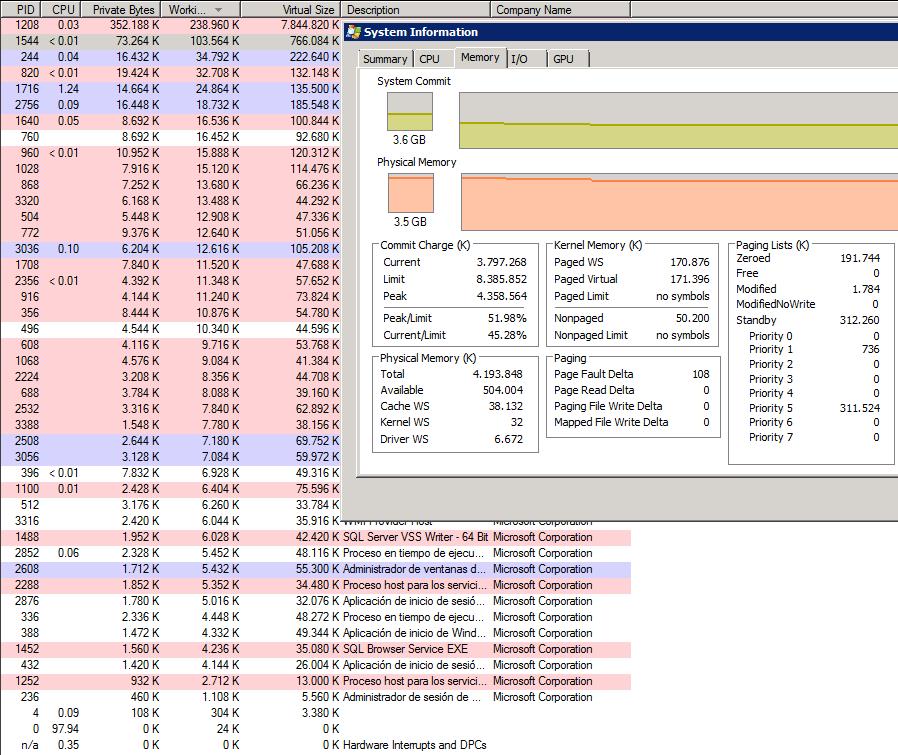 As you can see the system is consuming 3.6 Gb but the process list only shows a big process (the first one [SQL Server]) taking less than 500 Mb and the others are pretty small so I don't know who is taking almost all of the server's memory. Any idea on how to find out the culprit?

The OS doesn't care and you shouldn't either. The OS isn't under memory pressure, it has 500MB free. So it doesn't care how memory is used at all.

The only thing it could do is invest CPU to reclaiming memory. But then one of two things would happen:

Modern operating systems only make memory free when they have absolutely no other choice. It's the worst possible thing they can do with memory as it requires them to do additional work to make use of that memory. They can much more easily transition memory directly from one use to another use without the added wasteful intermediate step of making it free.

It's just doing whatever it happened to be doing last. The OS has no need to reclaim it because the most likely next use for that memory is whatever it was already doing before, and it's already there -- for free.

That said, RAMMap will tell you. But it's utterly pointless to analyze OS memory usage on a machine that's not under memory pressure.

Not the answer you're looking for? Browse other questions tagged windows-server-2008 sql-server memory memory-usage team-foundation-server or ask your own question.

4
Free application or script to monitor App pool memory usage
9
How to explain memory usage on Windows Server outside the list of running processes
1
Why does gnome-terminal use so much memory?
4
What's using all my memory?
4
VMware ESX virtual machine, Windows 2008 Server R2, memory full but process total nowhere near?
1
VMWare SQL 2008 R2 Windows 7 High memory usage
1
How can I query or view the usage and ownerships of physical memory?
0
Configuring SQL Report Server to work with Team Foundation Server using Internet URLs
1
ECC CE (Correctable Error) occuring every 5 minutes exactly
1
How to deal with out of memory issues on multi user systems?