Should we mount with data=writeback and barrier=0 on ext3?

While running performance tests, we noticed that some SQLite transations (combination of inserts, deletes and/or updates) were taking 10x to 15x longer than on my 2010 MacBook Pro.

After lots of googling and reading, we got to look at the mount options, which were:

We've done some experimenting, and got best performance with

I've read up on these, and understand the basics of what they're doing, but I don't have a good sense / feel for whether it's a good idea for us to run like this?

Is the above config even sensible to consider for a hosted service?

If we had a power outage, or hard crash, then we might end up with data being lost, or files corrupted. If we were taking snapshots of the DB every 15 minutes, that might mitigate the situation, but the DB might not be sync'd when the snapshot is taken. How should (can?) we ensure the integrity of such a snapshot?

Are there other options we should be considering?

First advice
If you cannot afford to lose any data (I mean once a user entered new data, if that cannot be lost in the coming seconds) and because you do not have something like a UPS, then I would not remove the write barrier, neither would I switch to writeback.

Removing write barriers
If you remove write barrier, then in case of crash or power loss, the file system will need to do a fsck to repair the disk structure (note that even with barrier ON, most journaling file system would still do a fsck even though the replay of the journal should have been sufficient). When removing write barrier, it is advisable to remove any disk caching (at the hardware) if possible, this helps minimizing the risk. You should benchmark the impact of such a change though. You can try this command (if your hardware supports it) hdparm -W0 /dev/<your HDD>.
Note that ext3 uses 2 barriers for on metadata change, whereas ext4 uses only one when using the mount option journal_async_commit.

Although Ted T'so explained why some few data corruption happened in the early days of ext3 (barriers were OFF by default until Kernel 3.1), the journal is placed in a way that unless a journal log wrap happens (journal are a cyclic log) data gets written to disk in a safe order - journal first, data second - even with hard disk supports reordering of writes.
Basically, it would be unlucky that a system crash or power loss happens when the journal log wrap. However, you need to keep data=ordered. Try to benchmark with data=ordered,barrier=0 in addition.

If you can afford to lose a few seconds of data, you could activate both options data=writeback,barrier=0 but then try to experiment with the commit=<nrsec> parameter as well. Check the manual for this parameter here. Basically you give a number of seconds which is a period the ext3 file system will sync its data and metadata.
You could try also try to fiddle and benchmark with some kernel tunables regarding dirty pages (those that need writing to disk), there is a good article here that explains everything about these tunables and how to play with them.

Summary regarding barriers
You should benchmark a few more combinations of tunables:

Considering moving to ext4 and benchmarking it
As said ext4 requires less barrier than ext3 for a write. Furthermore, ext4 supports extents which for large files might bring better performance. So it is a solution worth exploring, especially since it is easy to migrate from an ext3 to ext4 without reinstalling: official documentation; I did that on one system but using this Debian guide. Ext4 is really stable since kernel 2.6.32 so it is safe to use in production.

Last consideration
This answer is far from complete, but it gives you enough materials to start investigating. This is so much dependent of requirements (at user or system level) that it is hard to have a straightforward answer, sorry about that.

Caveat: there may be inaccuracies below. I've been learning about a lot of this stuff as I go along, so take it with a pinch of salt. This is quite long, but you could just read the parameters we were playing with, then skip to the Conclusion at the end.

There are a number of layers where you can worry about SQLite write performance:

We looked at the ones highlighted in bold. The particular parameters were

Read more about the ext3 options in the ext3 documentation.

I ran performance tests on a number of combinations of these parameters. The ID is a scenario number, referred to below. I started off by running with the default configuration on my machine as scenario 1. Scenario 2 is what I assume to be the "safest", and then tried various combinations, where appropriate / prompted. This is probably easiest to understand with the map I ended up using: 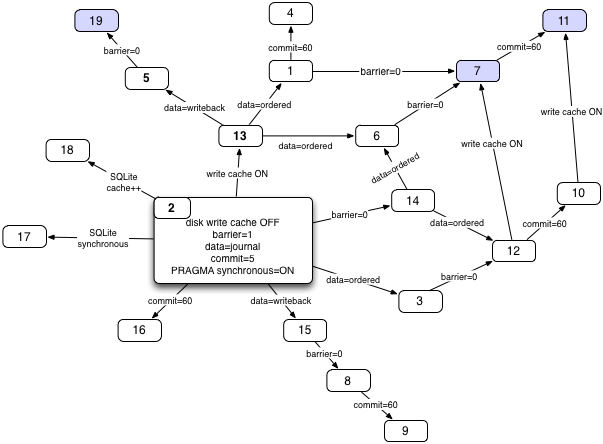 I wrote a test script which ran a lot of transactions, with inserts, updates, and deletes, all on tables with either INTEGER only, TEXT only (with id column), or mixed. I ran this a number of times on each of the configurations above: 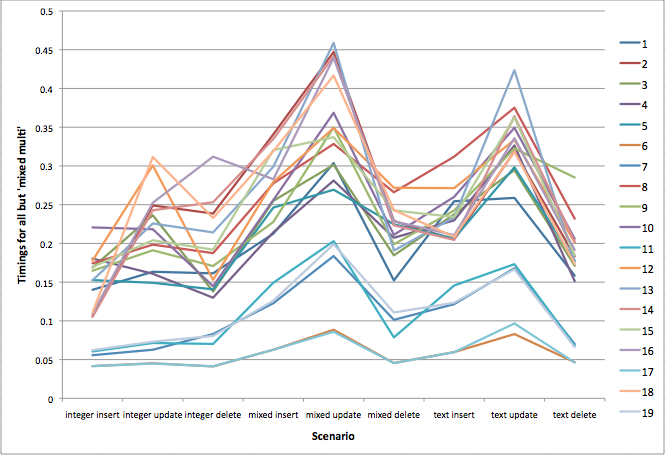 The bottom two scenarios are #6 and #17, which have "pragma synchronous=off", so unsurprising that they were the fastest. The next cluster of three are #7, #11, and #19. These three are highlighted in blue on the "configuration map" above. Basically the configuration is disk write cache on, barrier=0, and data set to something other than 'journal'. Changing commit between 5 seconds (#7) and 60 seconds (#11) seems to make little difference. On these tests there didn't seem to be much if any difference between data=ordered and data=writeback, which surprised me.

The mixed update test is the middle peak. There is a cluster of scenarios that are more clearly slower on this test. These are all ones with data=journal. Otherwise there's not much between the other scenarios.

I had another timing test, which did a more heterogenous mix of inserts, updates and deletes on the different type combinations. These took a lot longer, which is why I didn't include it on the above plot: 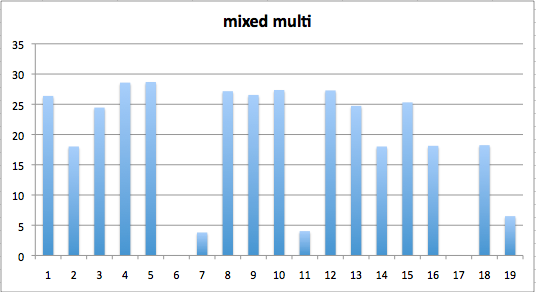 Here you can see that the writeback configuration (#19) is a bit slower than the ordered ones (#7 and #11). I expected writeback to be slightly faster, but perhaps it depends on your write patterns, or maybe I just haven't read enough on ext3 yet :-)

The various scenarios were somewhat representative of the operations done by our application. After picking a shortlist of scenarios we ran timing tests with some of our automated test suites. They were in line with the results above.

Thanks to @Huygens for various tips and pointers.

Not the answer you're looking for? Browse other questions tagged centos mount ext3 performance-tuning write-barrier or ask your own question.

3
Can I mount an ext3 filesystem on linux so files on the mount are owned by a userid?
0
Mount shows as swap instead of ext3
18
How do you re-mount an ext3 fs readwrite after it gets mounted readonly from a disk error?
1
Disabling "symlink follow" feature on Ext3/4 mount points
4
PostgreSQL tuning recommendation for large server and dataset
6
Filesystem performance tuning options for ext3
2
double mount check with ext3
1
ext3: permissions of the mountpoint change when I mount