We upgraded a Hyper V from 2008 R2 to Windows 2012. Then we copied one VHD (copy/paste) from one 2008 R2 to this new 2012 machine. Everything works well, and we decided to use a out of the box 2012 backup tool, to backup VM's. I have personally configured backup schedule to start, after midnight, and waited next day to see what will happen. I was sure that backup will work as a charm, since in 2008 I used a backup tool to backup this VM's. Ok, I was aware of thing such as: I moved from one host hd to antoher host witd hdd's configured as raid. The move was simple, shut down vm, copy vhd and configure new vm with that vhd. This VM has another vss writer, Symantec Backup Exec agent utility, but somehow

I realize that backing up vhd's as files fails. I have one 150 GB vhd and three others around 30 GB each. I tested backup on other files, works fine. Each of volumes are on bitlocker encrypthed hdd, raid 1+0 configuration, HP Proliant 380 G6 with 24 GB RAM. I am backing up to APACER volume, whis is holding another folder, it is configure as volume for backup, it is not dedicated.

Now I am struggling around to see how can I solve this non backup solution.

What I tried is to select Hyper-V in backup tool. I noticed that backup is going a really slow, and that I will takes hours/days to complete. I canceled backup several times, In some occasion my server hungs, I was not enabled to login on my server, I was 2 mins from hard restart, but I disconnected USB HDD volume for backup, and I was stucked log in process completed in seconds.

Today around 13:00 I configured backup to use Hyper-V as selection, and started it. I noticed, that backup was working somehow slow, 1 GB per time, for example 1GB goes fast, and than backup waits for 10 mins, to move ahead to another backup.

In the evening, I connected to Hyper-V host, to see, was backup successfull, and noticed that it stucks aroung 90 GB when backing up VM with 150 GB vhd.

I have no idea what I can do next. I am afraid of playing around with shadow copies, etc, what is getting on my mind, is that I will go next day to location and uplug USB hdd, so backup tool will cancel operation. I do not want to restar server.

Any Idea folks, what is a safest way to stop backup, and configure it to work normally.

Revised: I have noticed in system log that event id 129 is logged : Reset to device, \Device\RaidPort1, was issued

I had the same problem, and didn't really solve the problem. However I made a workaround of copying the VHD:s to the network backup disk. To do this, follow these steps: 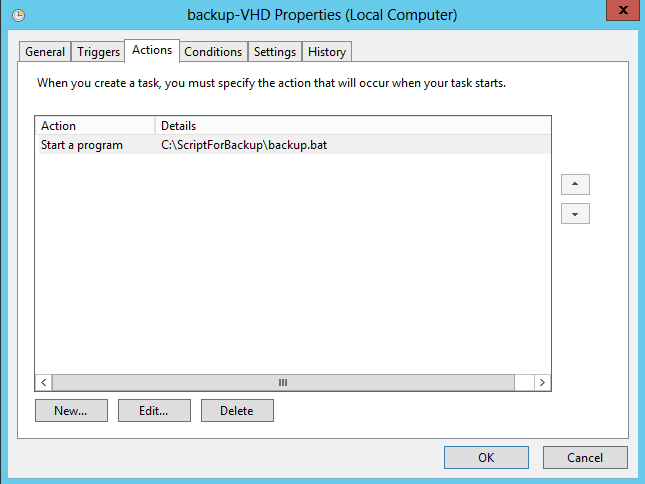 Not the answer you're looking for? Browse other questions tagged backup vss hyper-v-server-2012 or ask your own question.