My client has a virtual Server 2008 R2 terminal server running under ESXi 5.1.

This server, which been in production for around 4 months, experiences intermittent slowness / non-responsiveness for logged-in users. When this issue occurs iexplore.exe processes (32- & 64-bit) are using very high CPU & RAM. 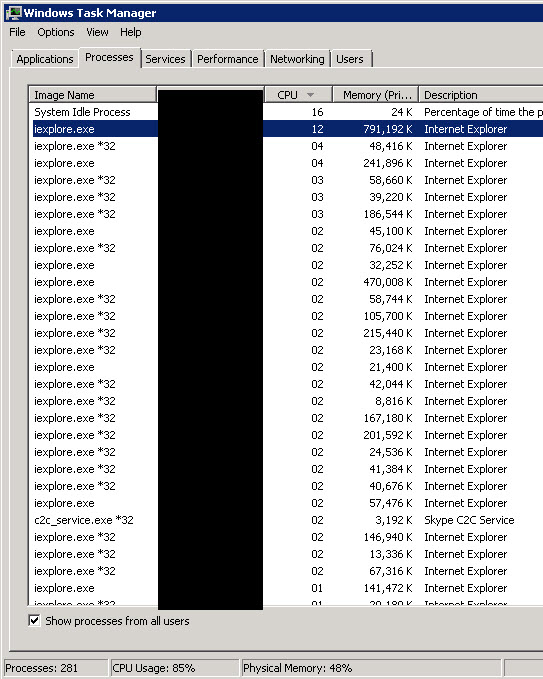 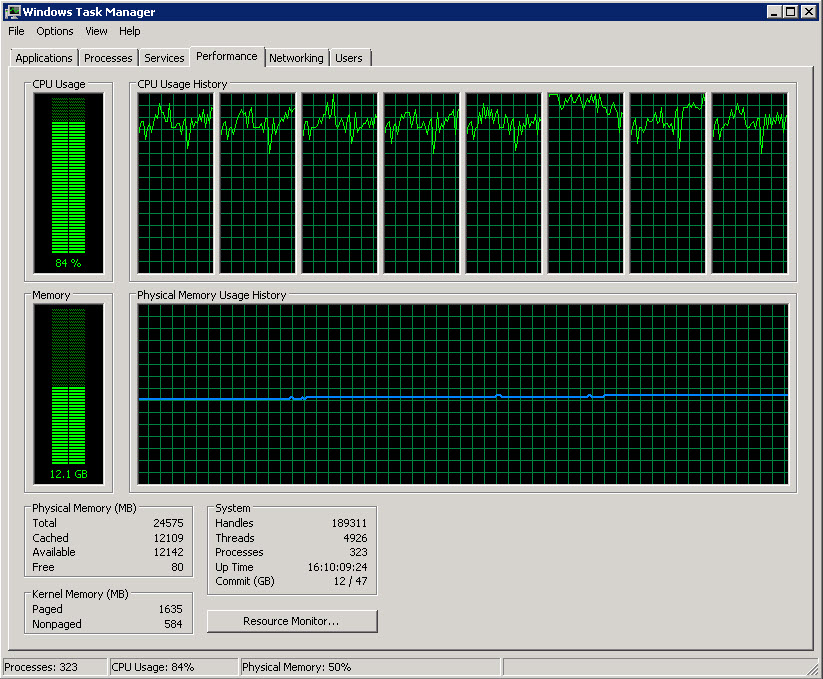 (These two screenshots were taken at separate times)

Any ideas on how to resolve this issue permanently?

We have a number of terminal servers used by clients, however this is the first TS that we've deployed under VMware. Our other terminal servers are either under XenServer or physical. Could this be an issue with VMware?

So you're telling me that the guest OS uses a significantly different amount of memory based on what hypervisor it's running under, given an identical workload? I don't think I buy that...

One obvious problem I see is that Internet Explorer is obviously a very heavily used application on your terminal server, however, you're using a mix of 32-bit and 64-bit instances of Internet Explorer. The problem with this is that the copy-on-read/write memory and other shared memory techniques that usually benefit a terminal server when multiple sessions are launching the same application, is that they lose those optimization techniques; they cannot be shared among 32 and 64 bit versions. If you standardized all your users on either 32 or 64 bit Internet Explorer, your overall memory usage would be less.

After user logon, the desktop (or application if in single-application mode) is displayed for the user. When the user selects a 32-bit application to run, the mouse commands are passed to the Terminal Server, which launches the selected application into a new virtual memory space (2-GB application, 2-GB kernel). All processes on the Terminal Server will share code in kernel and user modes wherever possible. To achieve the sharing of code between processes, the Windows NT Virtual Memory (VM) manager uses copy-on-write page protection. When multiple processes want to read and write the same memory contents, the VM manager will assign copy-on-write page protection to the memory region. The processes (Sessions) will use the same memory contents until a write operation is performed, at which time the VM manager will copy the physical page frame to another location, update the process's virtual address to point to the new page location and now mark the page as read/write. Copy-on-write is extremely useful and efficient for applications running on a Terminal Server.

When a Win32-based application such as Microsoft Word is loaded into physical memory by one process (Session) it is marked as copy-on-write. When new processes (Sessions) also invoke Word, the image loader will just point the new processes (Sessions) to the existing copy because the application is already loaded in memory. When buffers and user-specific data is required (for example, saving to a file), the necessary pages will be copied into a new physical memory location and marked as read/write for the individual process (Session). The VM manager will protect this memory space from other processes. Most of an application, however, is shareable code and will only have a single instance of code in physical memory no matter how many times it is run.

Not the answer you're looking for? Browse other questions tagged vmware-esxi memory-usage cpu-usage windows-server-2003-r2 or ask your own question.