I've got a FreeBSD 9.1-RELEASE-p1 system with three nics, I'm using: igb0, sfxge1 and sfxge2. igb0 used for internet access and is default gateway. Other two nics, I need to use to create bridge0. When system is booted, I execute following commands and get bridge up and running without any issues.

Problem starts when I want to setup bridge to be up during boot. After reading documentation and following it, I came up with following in my /etc/rc.conf:

On reboot, system getting stuck while enabling default gateway on igb0. Only way to proceed, was to ctrl+alt+delete, reboot into single mode and modify /etc/rc.conf. Portion of config, which defines igb0 and default gateway:

During boot, I see that igb0 comes up online after bridge0 is setup.

Update1: Here is what else I have in my /etc/rc.conf: 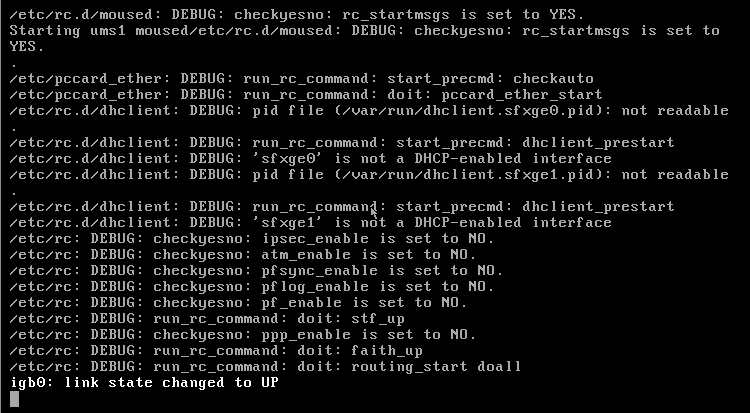 When I press Ctrl+T:

Looks like issue was due to quick exhaust of mbufs. As FreeNAS's wiki points out, this is common on multiport em and igb cards and mostly had nothing to do with bridge (correct me if I'm wrong).

So after I added following lines into /boot/loader.conf and booted, system finished boot properly.

You can't have multiple lines of the same configuration. The later lines will override the former.

Without knowing what the rest of your rc.conf file looks like, it should have something like this:

in fact is same as just second line. And this try to set IP on unconfigured bridge interface - this is probably cause of the problem. You should add inet 172.18.0.1/24 to first line and delete second.

Could you remove any interface configuration from rc.conf and comment it in rc.local and try this way?

This change a bit order of things.

Not the answer you're looking for? Browse other questions tagged networking freebsd bridge or ask your own question.