At my company we have a single Cisco 3925sec/k9 router running BGP with 2 ISPs. Now we want to purchase a redundant router of the same model to eliminate a single point of failure. 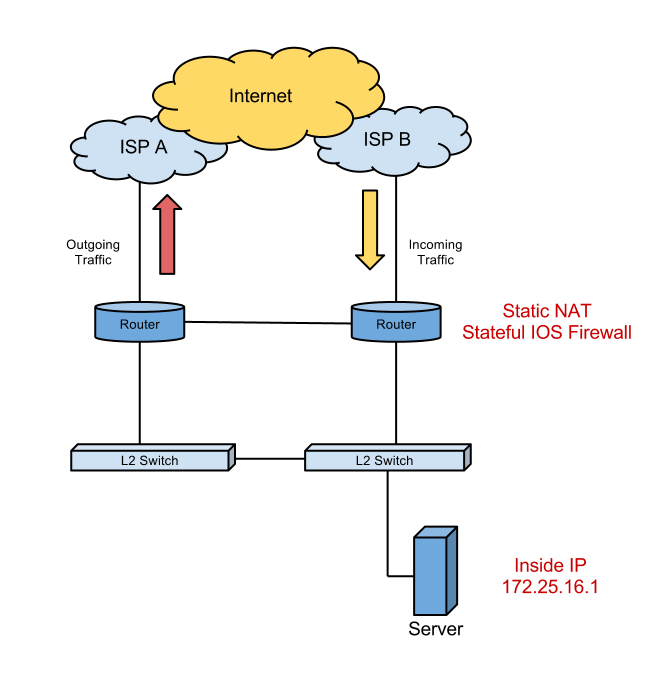 So my question is, what is the best solution to make sure I keep the state of static NAT and stateful firewall rules (not ZBF) on both routers at the same time? Again, I want traffic to leave through ISP A and return through ISP B.

Is it possible at all or do you think it would be better to purchase a pair of ASA 5500 series with Active/Active support and do NAT and inspection on them?

I am curious as to why you would want to purposefully force asymmetric routing like this? Most of the solutions for this are going to based on using HSRP tracking to decide which router is actively processing NAT/firewall rules with the assumption that the same router is seeing both the egress and ingress traffic. Let me lab up the routing you're suggesting and see if the standby router will actually service requests that the active router initiated.

In the meantime, the features you're wanting are definitely available in IOS. An ASA pair is going to be more designed to do what you're wanting, but depending on how much control you need over the rules IOS may fit the bill fine.

Something like this should work to track your NAT states. It's from a CCIE study vendor, but is explained pretty well.

Edit: I've labbed this up in GNS3, and the results are a mixed bag. The short answer is that NAT will work fine. CBAC, however, will not.

You can use Redundant NAT to share states between both your routers, allowing states created on the "egress" router to create equal states on the "ingress" router. These states are active, and will work fine.

However, CBAC is going to prove more of an issue. You can setup IPC between your two routers and get them to share states.

Some major issues with this approach though...

So yes, CBAC does support some redundancy but it's pretty useless for your situation. Sure you can't do ZBF? Zone-Based Policy Firewall High Availability @ Cisco.com

I'm still curious to hear why you need this forced-asymmetric routing, as that is what prevents you from using CBAC.