The XFS filesystem is broken in RHEL/CentOS 6.x - What can I do about it?

Recent versions of RHEL/CentOS (EL6) brought some interesting changes to the XFS filesystem I've depended on heavily for over a decade. I spent part of last summer chasing down an XFS sparse file situation resulting from a poorly-documented kernel backport. Others have had unfortunate performance issues or inconsistent behavior since moving to EL6.

XFS was my default filesystem for data and growth-partitions, as it offered stability, scalability and a good performance boost over the default ext3 filesystems.

There's an issue with XFS on EL6 systems that surfaced in November 2012. I noticed that my servers were showing abnormaly-high system loads, even when idle. In one case, an unloaded system would show a constant load average of 3+. In others, there was a 1+ bump in load. The number of mounted XFS filesystems seemed to influence the severity of the load increase. 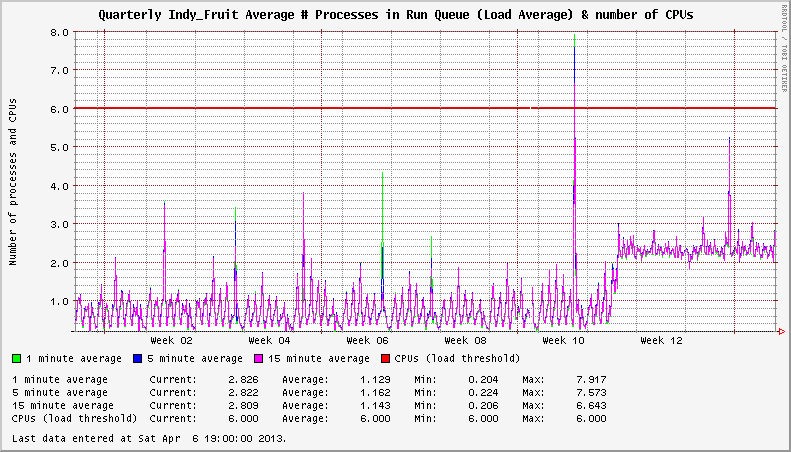 Digging deeper, I found a few threads on the XFS mailing list that pointed to an increased frequency of the xfsaild process sitting in the STAT D state. The corresponding CentOS Bug Tracker and Red Hat Bugzilla entries outline the specifics of the issue and conclude that this is not a performance problem; only an error in the reporting of system load in kernels newer than 2.6.32-279.14.1.el6.

I've had a new system build queue and have had to work around the issue, either locking kernel versions at the pre-November 2012 release for EL6.3 or just not using XFS, opting for ext4 or ZFS, at a severe performance penalty for the specific custom application running atop. The application in question relies heavily on some of the XFS filesystem attributes to account for deficiencies in the application design.

There is currently no resolution for this issue. It is currently being tracked via Bugzilla #883905. Workaround Downgrade the installed kernel package to a version lower then 2.6.32-279.14.1.

(except downgrading kernels not an option on RHEL 6.4...)

So we're 4+ months into this problem with no real fix planned for the EL6.3 or EL6.4 OS releases. There's a proposed fix for EL6.5 and a kernel source patch available... But my question is:

Red Hat introduced this bug. They should incorporate a fix into an errata kernel. One of the advantages of using enterprise operating systems is that they provide a consistent and predictable platform target. This bug disrupted systems already in production during a patch cycle and reduced confidence in deploying new systems. While I could apply one of the proposed patches to the source code, how scalable is that? It would require some vigilance to keep updated as the OS changes.

This patch was incorporated into the most recent CentOSPlus kernel release (kernel-2.6.32-358.2.1.el6.centos.plus). I'm testing this on my CentOS systems, but this doesn't help much for the Red Hat-based servers.

"At the point where the vendor's kernel or packages are so horribly broken that they impact your business" is my general answer (coincidentally this is also about the point where I say it makes sense to start looking at ways to depart from the vendor relationship).

Basically as you and others have said, RedHat seems to not want to patch this in their distributed kernel (for whatever reason). That pretty much leaves you in the situation of having to roll your own kernel (keeping it up to date on patches yourself, maintaining your own package and installing it on your systems with Puppet or similar, or running a package server that Yum or whatever they use today can reference), or taking your marbles and going home.

Yes I know taking your marbles and going home is often an expensive proposition -- switching OS vendors is a huge pain, especially in the Linux world where the flavors are radically different from an administrative standpoint.
Other options like going totally CentOS are also unappealing (because you lose support, and you're still getting essentially RedHat's code built by someone else so you'd still have this bug).

Unfortunately unless enough people (i.e. "huge companies) take their marbles and go home the vendor won't care so much about screwing people over by shipping bad code and not fixing it.

If you do need to patch your RHEL kernel, you can do it yourself and be officially supported on that kernel, you'll just need for them to certify it.

There are provisions in the RHEL support agreement for doing so - ISTR you're restricted to 1 or 2 per quarter or year but can't remember for sure.

74
How should an IT department choose a standard Linux distribution?
65
Why are my XFS filesystems suddenly consuming more space and full of sparse files?
14
HP DL380p Gen8 (p420i controller) I/O oddity on XFS partitions
10
CentOS 6 doing lots more IO than CentOS 5
2
What kind of "volume/storage management" has the largest support/feature set these days?

3
Filesystem for an external drive that'll only connect to Linux
9
Monitoring XFS filesystem health in Linux
2
Upgrading 32-bit XFS filesystem to 64-bit
363
Anyone else experiencing high rates of Linux server crashes during a leap second day?
65
Why are my XFS filesystems suddenly consuming more space and full of sparse files?
4
How to install java-1.7.0-openjdk-devel on RHEL Server 6.3?
72
Why is it so difficult to upgrade between major versions of Red Hat and CentOS?
1
Crash utility exit with error in Rhel6.6
0
How can I check if I have these XFS metadata scalability improvements on CentOS6?