What am I doing wrong with this cat 6 patch panel wiring?

is this because I could be mixing T568A and T568B wiring? how do I know if my patch cord is A or B? Do I just look at the plug and match it up with the diagram on the back of the panel somehow? 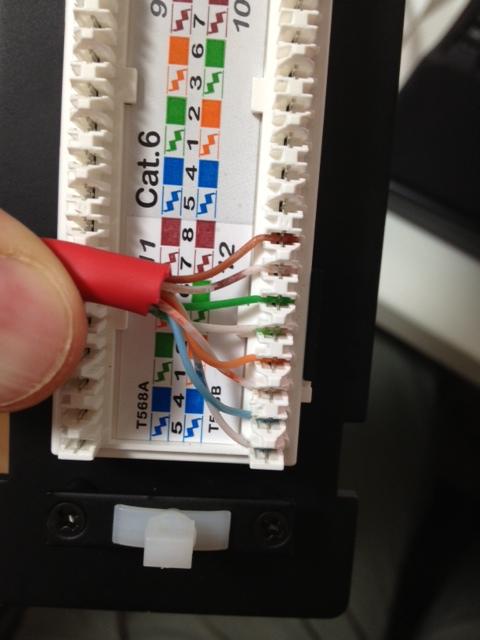 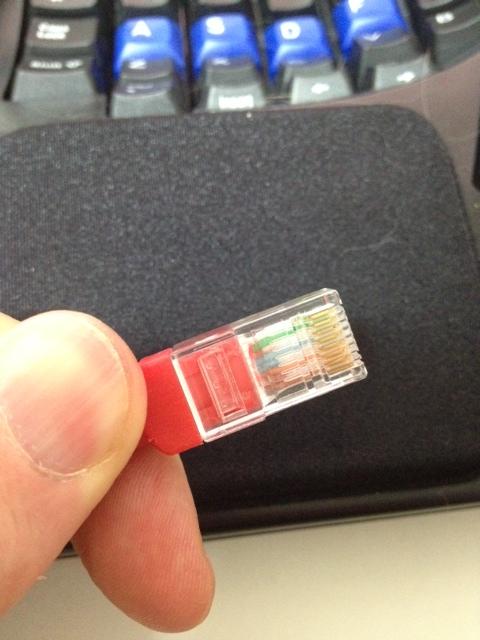 There is a lot of inaccurate and misleading information here. Even the accepted answer fails to understand exactly what happened at the punch-down block side of the cable.

I am posting a more accurate answer to help anyone else who may find themselves in a similar situation.

How do I know if my patch cord is A or B?

Do I just look at the plug and match it up with the diagram on the back of the panel somehow?

There are two parts to the question:

An Ethernet cable's Rj45 connector can easily be identified as following either the T-568A or T-568B wiring standard if the wires are in either of the following sequences: 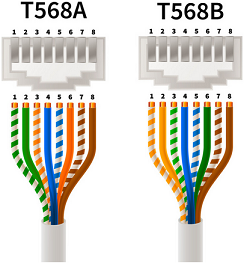 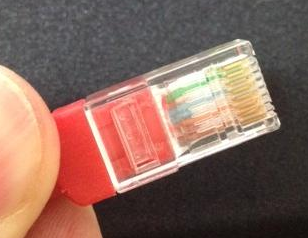 The second half of this question seems to be where people got confused.

Here is an example of an answer that provided incorrect information by assuming that the left-to-right wire sequence represents pins 1-8, as it does in an RJ45 plug:

You can see that the rj45 plug has the blue wires in the center whereas on the patch panel they are on the side.

We can clearly see from this photo that connection #12 on the patch panel's punch-down block is wired according to the panel's wiring instructions for T-568B.

The orange and green pairs should be released from the punch-down block and connected according to the wiring instructions for T-568A, as seen in the top half of the above photo.

OK let me know if I'm wrong here but I think I figured it out.

You can see that the rj45 plug has the blue wires in the center whereas on the patch panel they are on the side.

I know you explained why you have a patch panel on one end and a plug on the other, but it's generally not a good idea to mix both types. On both ends of the cable should be either a female or a male end.

The reason for this is that patch panels/blocks work best with solid core cables, but plugs are most effective with stranded cables. The ideal situation would be less than 90 meter of cable running from a patch panel near the router to a wall socket, and then connect the device to the wall socket with a patch cable with two plugs on both ends, shorter than 10 meter.

The problem with putting an rj45 plug on a solid core cable is that the little 'knifes' inside the plug don't cut into the wire as they would with stranded cable. They just sit on top of it, often giving you bad or even no connection at all.

Ok, Here's the solution and it's pretty easy actually, if you know....

So I'm not a Network expert but I knew the solution was easy. I was punching down on my patch panel and terminating on the other end with an rj45. I was doing 568B on both ends and it wasn't working. I was looking at the diagram on the patch panel and it wasn't either B or A, it just had all the colors paired up together. So after almost a week of fudging with it I finally figured out that the patch panel itself internally crosses the pairs so that it ends up being a B pattern. That makes it easier for when you're punching down hundreds of Ethernet cable. You just go along with the colors instead of trying to remember the correct pattern. Hope this helps cause it was the simple answer I was looking for... Terminate or punch down with 568B on one end and then just punch down according to the diagram on the patch panel. DONE!

Yes, you are terminating T568A and then, testing T568B. Just flip your green and orange pairs.

Whether you use a T568A or T568B patch cable will not matter as "electrons are colorblind"...as long as the pinouts on both ends are the same, either will work. Make sure to maintain your network standard (Cat.5e or Cat.6). If you use any Cat.5e items on a Cat.6 network, you will lower all your metrics to that Cat.5e standard. As long as your patch cable ends are pinned-out the same (straight through) to either the T568A or the T568B pinout, you will be okay.

A "crossover" patch cable is pinned-out to T568A at one end, and to T568B at the other end. They are (or were) typically used when cascading two or more network hubs or switches. The advent of "smart switches" has pretty much negated their use.

I haven't done this in years, but I believe T568B to T568A is a crossover cable for 10/100BaseT connections and you will need to make a gigabyte crossover cable to go faster.

I found a reference link for you: http://en.wikipedia.org/wiki/Ethernet_crossover_cable#Crossover_cable_pinouts

Not the answer you're looking for? Browse other questions tagged local-area-network wiring cable cat or ask your own question.

18
What is the wiring for a patch cable?
37
What is a patch panel?
8
How to fix the wiring mess that is my server room
1
Using pre-made patch cables on a punch down block?
18
What else do I get with Cat 6 beyond future proofing my wiring?
4
Do you really need cable management for a cabinet with just switches and patch panels?
3
Is wiring ADSL and Phone lines to a patch panel ok?
22
What is this wiring panel and what are these Ethernet “ports?”
0
Patch panel confessions