I am trying to find some documentation or best practice guides for virtualization with respect to provisioning vCPUs per physical core (of a CPU). If it matters, I am looking at vmWare for the virtualization implementation. For example, an Intel Xeon CPU may have 4, 8, etc. cores. I am interested in learning more about provisioning beyond just one vCPU per one physical core. The vendor I am talking to definitely thinks that a single core can be provisioned into multiple vCPUs.

What I commonly see in my research thus far is, "Well, it depends on your application." And in that case, my application is editing code, compiling/linking, testing, and configuration management. Of course not all of the VMs need to be configured with multiple vCPUs per core, but in the general case.

A single physical CPU can be utilized as many vCPUs. You rarely run out of CPU resources in virtualization solutions. RAM and storage are always the limiting factors...

Let's look at the following cluster of systems... 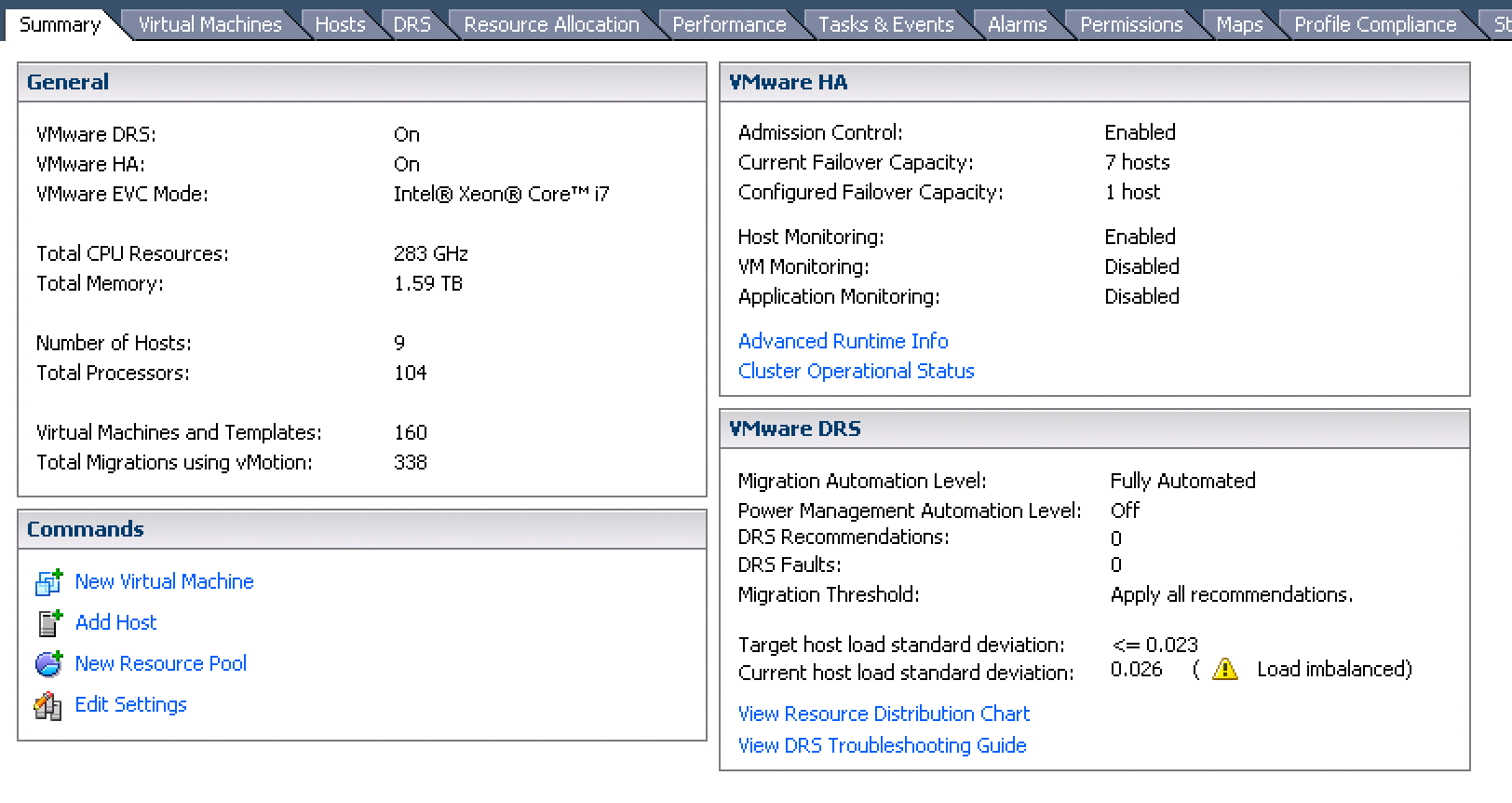 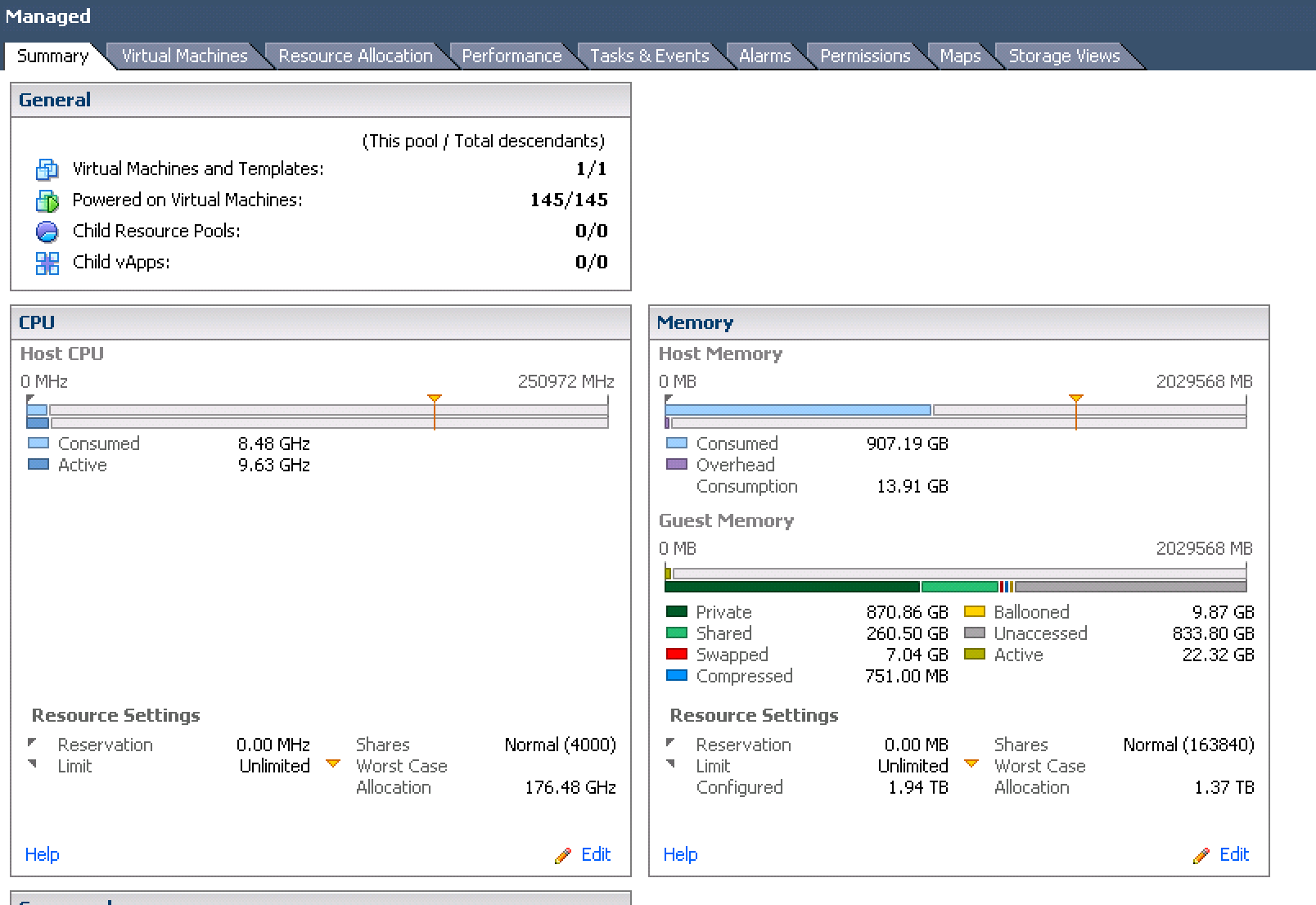 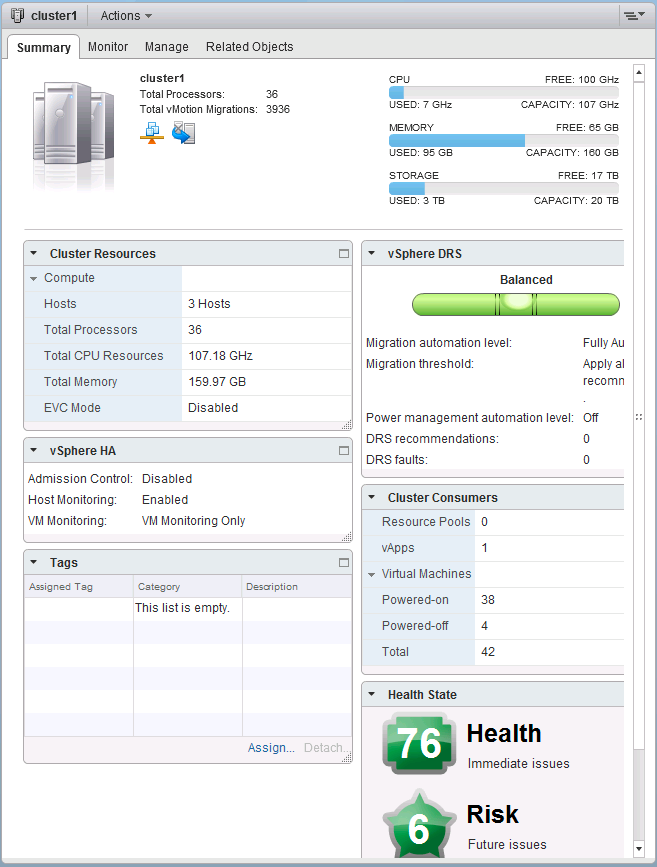 To expand on ewwhite's write-up, unless you have applications which can explicitly take advantage of multiple vCPUs, or multiple cores per vCPU there is absolutely zero benefit in allocating multiple vCPUs/cores to a VM. In fact, more often than not you will actually end up with lower performance as opposed to running on a single vCPU that has one core assigned to it, in part because of the scheduling overhead required to run multiple vCPUs.

The reason why so many people say that "it depends" is because it really does. Look at your CPU Ready values and then decide whether you can put more CPU load on a particular system. CPU Ready is a measurement of the vCPU being ready to execute a command but it has to wait for physical CPU time to become available.

In your case, if you are compiling large programs, it's entirely possible that your VMs will actually need a lot of CPU time. As ewwhite noted, normally virtualization tends to be disk I/O and RAM constrained rather than CPU constrained though.

The underlying problem is basically the same as with process-scheduling on a physical system. As long as the system load is below the number of cores (or even logical processors, in case of HyperThreading) all is well and the processors can handle the load.

So as long as the concurrent load on all used vCPUs does not exceed the load that can be handled by your physical cores all is well.

For your demands only compiling is a CPU-intesive work, which is only needed from time to time. For the compiler-VMs we allocat as many CPUs as available. So if there is a need to compile, it will be done as fast as possible (if your compiler supports paralell compiling).

This might not be true for a compiler-VM that is under constant load (e.g. if you provide a internet-service to make compiles and that is constantly being used).

One rule of thumb i've seen (possibly in VMware's documentation) is not to allocate more cores to a VM than physically exist on the host, because that would cause multiple vCores to be emulated on a single core, adding unnecessary overhead.

Not the answer you're looking for? Browse other questions tagged virtualization vmware-vsphere best-practices vcpu or ask your own question.

7
How does the vCPU align with the CPU? (VM with more cores than the CPU has)

0
Using ESXi 4 with more than 1 physical CPUs
1
SQL Server performance on VSphere 4.0
1
Can I utilize the full performance of a hypervisor's physical CPU cores when running a high CPU usage appliciation inside a VM?
5
What options do I have to clone a physical server as easily as a virtual machine?
89
Why is TCP accept() performance so bad under Xen?
6
Single-thread app 50% slower on VMware X5650 than physical E5450
62
How to [politely?] tell software vendor they don't know what they're talking about
2
Azure VM Core vs vCPU
1
NUMA and VM sizing on VMware