How do I find out which VM is responsible for the majority of the I/O I see with Hyper-V?

The situation: I do have Hyper-V hosts with a number of VMs (around 30 per host) where I occasionally see prolonged periods of high disk utilization. I would like to know which VM is causing this.

I tried using Process Explorer, but it reported all Hyper-V related I/O to be handled by the "System" process, so no help there: 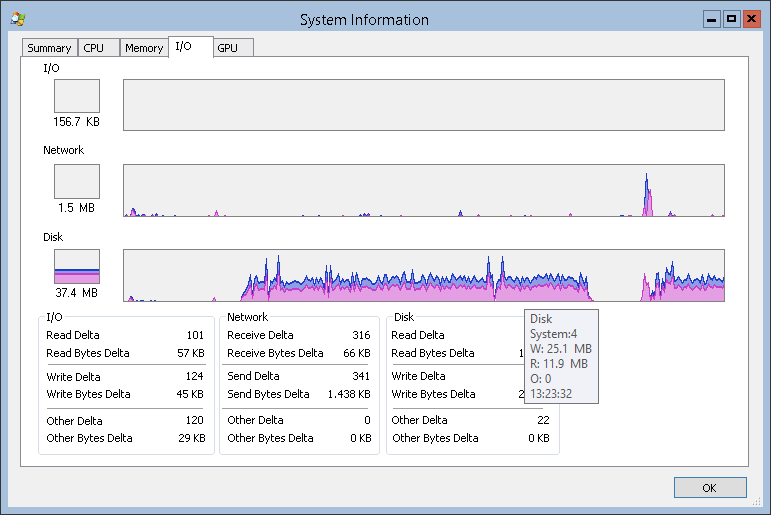 It already would help to have a breakdown by files accessed. The full GUI install of Windows Server has the Resource Monitor which is providing this information. However, Resmon seems to be unavailable in Core and Hyper-V installations.

Syneticon-dj, I wrote something for you this afternoon. I thought this problem was interesting, so this simple script will give you the read and write IO stats on each running VM on the Hyper-V host. As an added bonus it associates each VM to its vmwp.exe's Process ID.

You can run this on your Hyper-V server, because it doesn't need a GUI.

The downside is that while I was working on this, I noticed that the performance counters were working great for a while, and then for no discernible reason they decided to all stay on zero. Well maybe it's not a bug, like Chris S says... but these counters might unfortunately not be very useful after all. Regardless, it would be very easy to modify the script to use the Virt. Storage Device counters instead.

Both of the other answers are useful. But I find that I get what you're looking for much more easily (when the VHDs are stored on local or locally shared disks instead of a file server) by opening up "Resource Monitor" and looking at the Disk tab. Look at "Disk Activity" and sort by "Total (B/sec)." You'll see the VHDs listed in order of their activity.

Obviously my strategy is a loose approximation for machines that you're locally logged into, which makes it less useful in a big, headless environment.

I wrote a PowerShell GUI tool gathering Guest performance data for all VM's found on selected Hyper-V hosts. Data gathering and matching is done with get-counter and Hyper-V WMI information. Run from any member server, no modules required. I hope this will help in quickly troubleshooting performance problems on Hyper-V hosts and VM's.

You may want to try a 3rd party tool that can help with detecintg virtual machine that is causing high I/O, and also has the ability to alert on such high I/O’s. You can check it out here - ApexSQL VM Monitor.

This tool can monitor large spectre of disk counters for host and virtual machine, and beside predefined counters, it can be set up to monitor and show graphical presentation of counters from Performance monitor.

Not the answer you're looking for? Browse other questions tagged performance-monitoring hyper-v-server-2012 or ask your own question.