Is it possible to prevent DHCP service on SBS 2003 from shutting down due to rogue DHCP server?

Ask Question
Asked 6 years, 7 months ago
Viewed 188 times
0
Merged with Need to prevent SBS 2003 disabling its DHCP server if it sees another DHCP server on network.

We are using LogMeIn Hamachi to link two remote sites together by VPN.

This is working perfectly, the only problem is that the DHCP service on our SBS 2003 server shuts itself down after an hour or so of Hamachi being enabled, as it identifies the virtual DHCP server on the Hamachi gateway PC and believes it is a rogue DHCP server.

Hamachi is not installed on the SBS server, but on a regular Windows XP machine on the same LAN.

As far as I can see, the Hamachi virtual DHCP server is not really a rogue DHCP server in this scenario. No client on the LAN will ever get an IP address from Hamachi (same subnet but different, non-overlapping DHCP scopes) however, it's obviously not doing something right because the server's DHCP service does not want to coexist with it.

Does anyone know of a way to prevent the DHCP service on the SBS 2003 server from shutting down if it believes it sees other DHCP servers on the network? I want to treat this as a false positive and see what happens if we ignore it- there is no way for IP conflicts to happen due to the non-overlapping IP scopes. 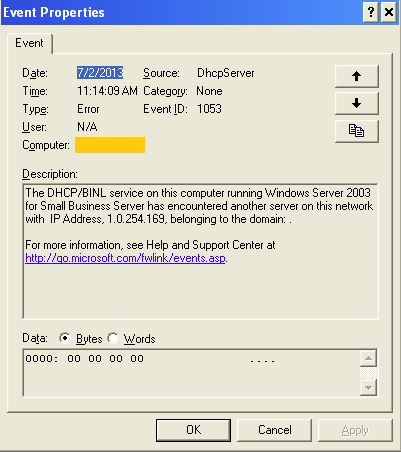 Browse other questions tagged windows-sbs-2003 dhcp-server hamachi or ask your own question.