The DHCP server on our SBS 2003 server shuts itself down automatically after a couple of hours of having a Hamachi gateway running on the same LAN. 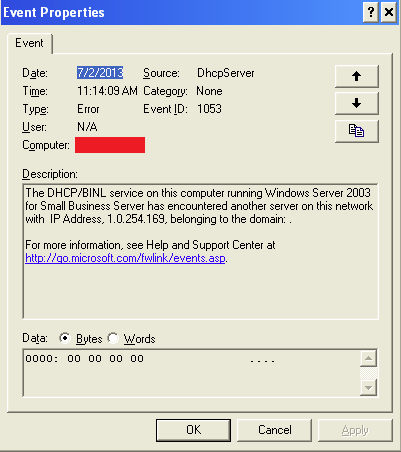 The server incorrectly assumes that Hamachi might start assigning DHCPs to other clients on the LAN.

While the Hamachi gateway client does indeed have a DHCP server, it only assigns IPs to computers making inbound VPN connections- not to PCs on the LAN.

Does anyone know of a way to override this behaviour on SBS 2003? Perhaps a registry hack?

I know the server has good intentions when it disables its DHCP server in this situation... however, in avoiding a non-existent problem, it is actually creating a real problem.

IF you really want to you can disable rogue DHCP server detection by setting the REG_DWORD value DisableRogueDetection to 1 under HKEY_LOCAL_MACHINE\System\CurrentControlSet\Services\DHCPServer\Parameters.

As an aside: It kinda sounds like you installed the Hamachi adapter directly on the Windows SBS 2003 computer. If that's the case then you're probably going to have issues with a multi-homed domain controller to start worrying about.

Yes, they assume that when you purchase SBS that it will be the only server in your environment providing DHCP services. SBS is targeted at a specific usage scenario and they expect that the people purchasing and deploying it understand how and why it fits into that usage scenario. The assumption is that you have reviewed it's operations and features before you deploy it and that you're deploying it because it's feature set is needed and understood. You can't blame them for developing a product aimed at a specific usage scenario and implementing features that serve that scenario. If you don't need or want the services provided by SBS then don't use it. I'm sorry if it sounds like I'm picking on you but I get tired of hearing people bash Microsoft because they think it's Microsoft's fault that their product doesn't fit perfectly in your environment.

Not the answer you're looking for? Browse other questions tagged windows-sbs-2003 dhcp-server or ask your own question.

0
Is it possible to prevent DHCP service on SBS 2003 from shutting down due to rogue DHCP server?