I have a large (> 100TB) ZFS (FUSE) pool on Debian that lost two drives. As the drives failed, I replaced them with spares until I could schedule an outage and physically replace the bad disks.

When I took the system down and replaced the drives, the pool started resilvering as expected, but when it gets to about 80% complete (this usually takes about 100 hours) it restarts again.

I'm not sure if replacing two drives at once created a race condition, or if due to the size of the pool the resilver takes so long that other system processes are interrupting it and causing it to restart, but there's no obvious indication in the results of 'zpool status' or the system logs that point to a problem.

I have since modified how I lay out these pools to improve resilvering performance but any leads or advice on getting this system back into production are appreciated.

zpool status output (the errors are new since last time I checked):

Congratulations and uh-oh. You've stumbled across one of the better things about ZFS, but also committed a configuration sin.

First, since you are using raidz1, you only have one disk worth of parity data. However, you had two drives fail contemporaneously. The only possible result here is data loss. No amount of resilvering is going to fix that.

Your spares helped you out a little bit here and saved you from a completely catastrophic failure. I'm going to go out on a limb here and say that the two drives that failed did not fail at the same time and that the first spare only partially resilvered before the second drive failed. 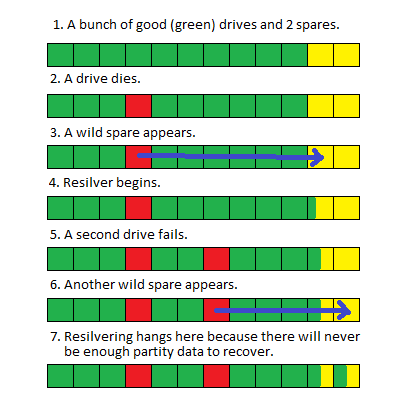 This is actually a good thing because if this were a traditional RAID array, your entire array would have simply gone offline as soon as the second drive failed and you would have NO chance of an in-place recovery. But because this is ZFS, it can still run using the pieces it has and simply returns block or file level errors for the pieces it doesn't.

Here is how you fix it: Short-term, get a list of damaged files from zpool status -v and copy those files from backup to their original locations. Or delete the files. This will allow the resilver to resume and complete.

Here is your configuration sin: you have way too many drives in a raidz group.

Long term: you need to reconfigure your drives. A more appropriate configuration would be to arrange the drives in to small groups of 5 drives or so in raidz1. ZFS will automatically stripe across those small groups. This significantly reduces the resilver time when a drives fails because only 5 drives need to participate instead of all of them. The command to do this would be something like:

13
Is a large RAID-Z array just as bad as a large RAID-5 array?
10
Raid 5 Hard disk corruption
9
What happens if I force ZFS to detach a hot spare with no valid replicas?
4
Replacing a recovered hard disk in a ZFS pool

9
What happens if I force ZFS to detach a hot spare with no valid replicas?
4
FreeNAS zfs zraid two failing disks
3
ZFS: how to replace disk that faulted while resilvering after another fault?
6
Fix ZFS DEGRADED pool that had hot spare
7
zfs - hotspare, replace, detach: ressource is busy
1
zpool stuck in resilvering loop
1
ZFS - is it safe to remove files served by ZFS during a resilver/rebuild?
2
ZFS Pool Data Backup and Restore