I don't know what these are or how to uninstall them. As far as I can tell, they aren't installed. I know that the name "Terminal Services" has been replaced by "Remote Desktop", but since "Session Broker", "Gateway", and "Web Access" are all listed as "Not Installed", that leaves "Virtualization Host" unaccounted for. It's not in the list as either installed or not installed, and they can't seriously expect me to uninstall Terminal Server itself??? What should I do? 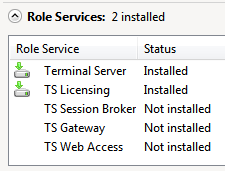 They do expect you to do so, the roles have changed dramatically and "Remote Desktop Session Host" is "Terminal Server", albeit in new language.

You will still be able to access your machine via remote desktop without the role installed, it will just be limited to 2 concurrent connections from administrative users.

Not the answer you're looking for? Browse other questions tagged remote-desktop windows-server-2012 windows-terminal-services upgrade or ask your own question.