Our SQL server is becoming pretty heavily loaded, and all indications point to the disk channel being the bottleneck. The current HP server has a fairly low-end array card, and we're looking to augment this server with a Smart Array card and external storage array with SSD drives.

The database server hosts one fairly large database (~100Gb), containing both live and historical data. For many reasons, splitting the database isn't an option, so the current thinking is to have multiple logical drives on the new array, each on it's own channel, and then split the database into logical SQL partitions.

Currently, we're looking at something like a D2600 with a high-end Smart Array card.

In order to get the maximum performance, we really need each logical drive to run as fast as possible. HP's specs suggest that their top-end SSDs could come close to max'ing out the 6Gb connection that the Smart Array cards support.

However, some of the bigger SA cards suggest they support "multiple channels"; what's not clear to me is how this work. Does this mean, with a single cable from SA to D2600, each RAID set could be configured to get it's own 6Gb channel? Or is 6Gb the limit on the interconnection, and if so is there any configuration option (or even different HP product - not trying to get around the "no subjective questions" rule, honest :) ) that would overcome this limit?

EDIT: I can't see any HP server that will do it, but if there is a decent Proliant box that will allow me to split the internal drive cage into two (or more) channels, that might be a "Plan B" - does anyone know of such a server?

Okay. This is an interesting question, as there are a number of options available to you.

Some concepts to clarify and understand, as they relate to this situation:

In order to get the maximum performance, we really need each logical drive to run as fast as possible.

Storage performance is not always about bandwidth!! Latency, I/O read and write patterns, queuing, application behavior, caching, etc. are all factors. Given what you've described, you're nowhere near saturating the link to your storage.

The current HP server has a fairly low-end array card

No it doesn't. The Smart Array P410i controller is the onboard controller available on the G6 and G7 ProLiant servers. It performs just fine, as long as a battery-backed (BBWC) or flash-backed (FBWC) module is installed. It's limited to the internal bays of the server and has no SAS oversubscription. There are two SAS SFF-8087 4-lane connectors linking the motherboard to the backplane, each providing 6Gbps full-duplex bandwidth.

Currently, we're looking at something like a D2600 with a high-end Smart Array card.

The other RAID controllers in HP's portfolio for that server generation perform similarly (Smart Array P411 and P812). They differ in that they provide more flexible or external connectivity. The D2600 enclosure would potentially be a step-down in raw throughput, depending on its configuration. However, it's absolutely the wrong choice for this setup, as it only accommodates large-form-factor 3.5" disks. The D2700 enclosure is the variant that houses small-form-factor 2.5" disks.

This is an issue with the single 120GB SATA SSD you're using. I have one sitting here. It's a low-end, slow-ass SSD. That's all. It maxes out at ~180 Megabytes/second sequential and is just an overall poor performer. HP should not sell it! It's relatively low-latency, compared to spinning disks, but is terrible for what you're trying to do. It's worse that you only have one drive. Four of them would be acceptable.

I would recommend either a pair of 400GB MLC HP Enterprise disks (made by Pliant/Sandisk) if you are not planning much growth beyond the 200GB you're using now. Otherwise, four disks would be better. Unfortunately, they are not cost-effective ($2800US+ each).

When I don't use the HP Enterprise SSDs and need to consider cost, I purchase the Sandforce-based OWC Mercury Extreme Pro drives and place them in HP drive carriers. Works great, inexpensive and is a much better deal for the generation of hardware you're using. Use RAID 1+0 and follow the P410 SSD configuration guidelines from HP. I spend a lot of time with SSDs...

I have a few of these drives sitting here as I type... 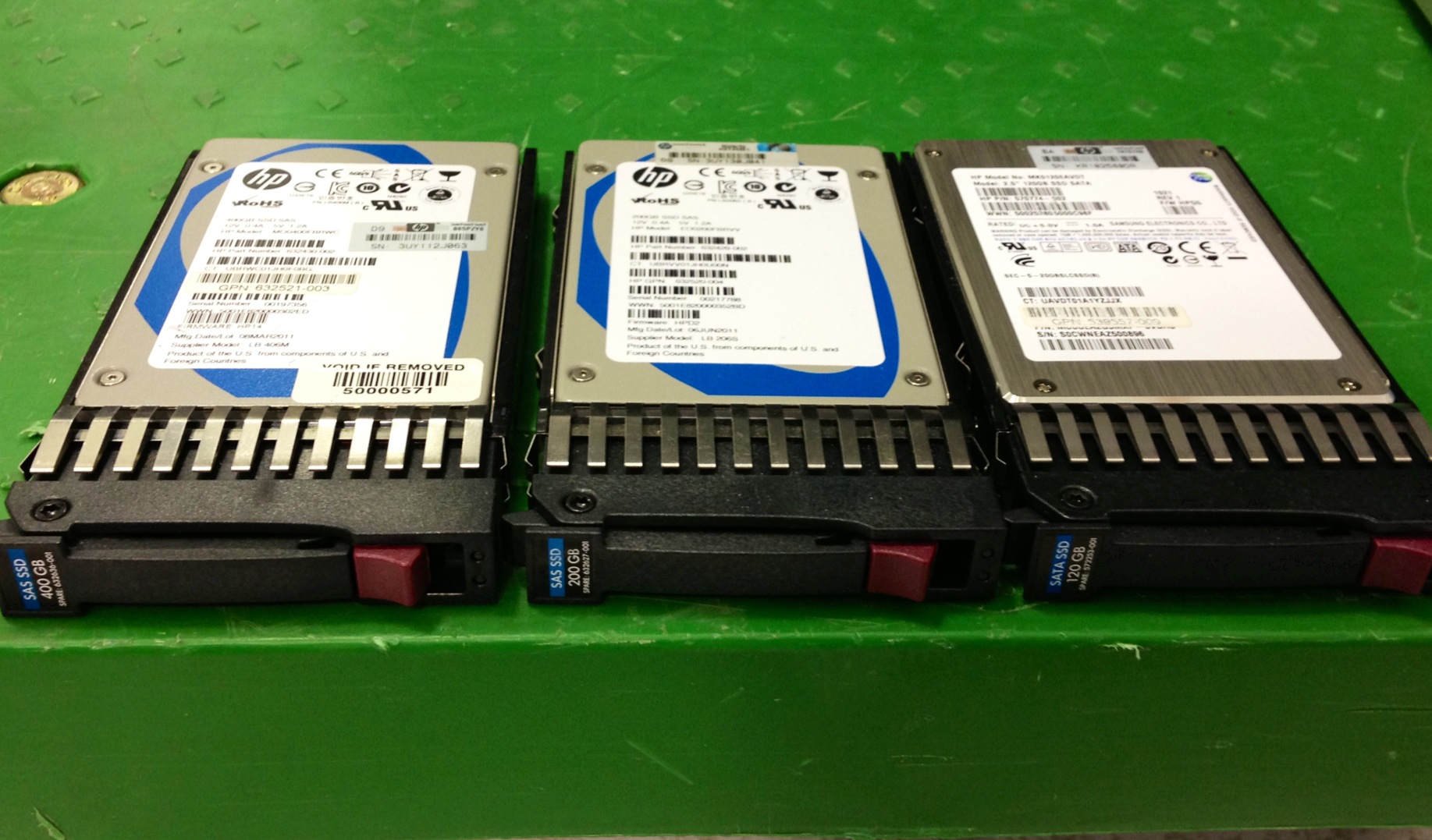 The rest of the items in your question are not an issue...

Why are enterprise SAS disk enclosures seemingly so expensive?

The D2600/2700 has dual 6Gbps SAS channels on the backplane, the cables you connect them with carry four x 6Gbps SAS channels to allow you to daisy-chain another shelf off the first one without any port blocking when connected to a four channel card such as a P812/822.

By the way if I were you I'd simply create one large RAID 10 array and then create the number of logical disks you need from that array - it'll perform far better than the R1+R1+R10 suggestion. Come back to us if you have further queries, this is right up my alley ;)

To get what you're looking for you'll need to look outside of HP.

Not the answer you're looking for? Browse other questions tagged storage hp hp-proliant ssd hp-smart-array or ask your own question.