I'm wondering how other people deal with this scenario.

Could be Windows Task Scheduler, SQL Agent or any other scheduling tool. Most of these tools seem to be based on machine time, not UTC time. If I told it to run the job at UTC time each night, then I wouldn't have the duplicate hour issue.

Proper scheduling of future tasks by local time, taking into account time zones and daylight saving time, is a very complex subject. I've written about it before from a programming perspective on Stack Overflow here and here.

I'll summarize from a non-programming perspective:

Windows isn't necessarily doing the right thing. Pay attention to how you define the trigger: 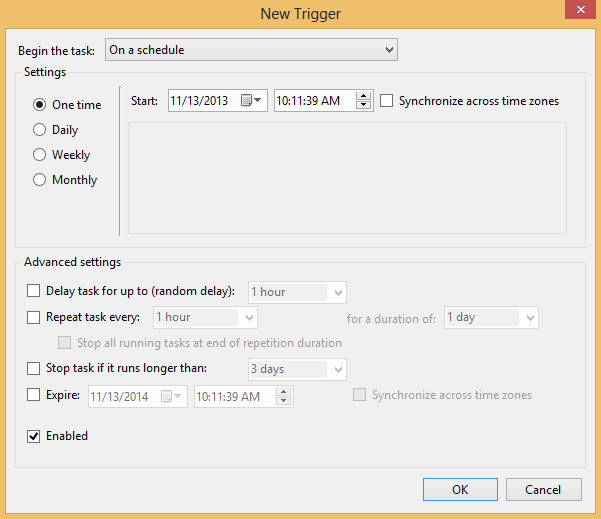 When you check the box labeled "Synchronize across time zones", then the task is scheduled by UTC only. (All times are still shown as local time, but are stored as UTC.) So this is for what I earlier called an "absolute" event.

When you leave that box unchecked, it's going to use the local time zone of the computer the code is running on. It doesn't give you any option to specify the time zone, so that's not a very good implementation IMHO.

I'm not exactly sure of it's DST behavior, but I will experiment and get back to you on that. It probably does what I described above, but not necessarily.

The SQL Agent scheduler is even worse, in that it only lets you use local server time. Again, no time zones can be specified, and you can't specify UTC either.

It has been requested, but not accepted.

By not caring, generally.

Ask the question "so what if the task runs twice?"

Generally, it's not going to matter, so you don't need to do anything. If it would matter, the simplest solution is to move the job out of the hour impacted by the daylight savings time change.

As you noted, the hour between 1AM and 2AM repeats at the end of DST; when the reverse change occurs (the start of DST) the times between 2AM and 3AM won't occur (and your job won't run). Your best options are going to be

Not the answer you're looking for? Browse other questions tagged scheduled-task task-scheduler job-scheduler sql-server or ask your own question.