We have a client with 6 sites using IPsec. Every now and again, possibly once a week, sometimes once a month, data just stops flowing from the remote Fortigate VPN server to the local MikroTik IPsec VPN client.

In order to demonstrate the symptoms of the problem I have attached a diagram. On the diagram Installed SAs tab you will notice a source IP address x.x.186.50 trying to communicate with x.x.7.3 but 0 current bytes. x.x.186.50 is the client's remote Fortigate IPsec server, and x.x.7.73 is a MikroTik based IPsec endpoint. It appears data from the remote side to us is not always flowing.

Phase 1 and 2 are always established but traffic always refuses to flow from the remote side to us.

We tried various things over time, such as rebooting, setting clocks, dabbling with configuration, rechecking and rechecking configuration but it appears the problem is entirely random. And sometimes random things fixes it. At one stage I had a theory that if the tunnel is initiated from their side it works, but fiddling with "Send Initial Contact" has not made any difference.

We've had many chats to the client about this but they have many more international IPsec VPNs and only our MikroTik configuration is failing.

Looking at Fortigate's knowledgebase it appears SPIs don't agree and DPD would make a difference. But I have tried every single combination of DPD on this side without avail. I would like to enable DPD on the other side but I cannot due to change control and also because the client is saying it's working on all the other sites exactly configuration the same. EDIT DPD was enabled 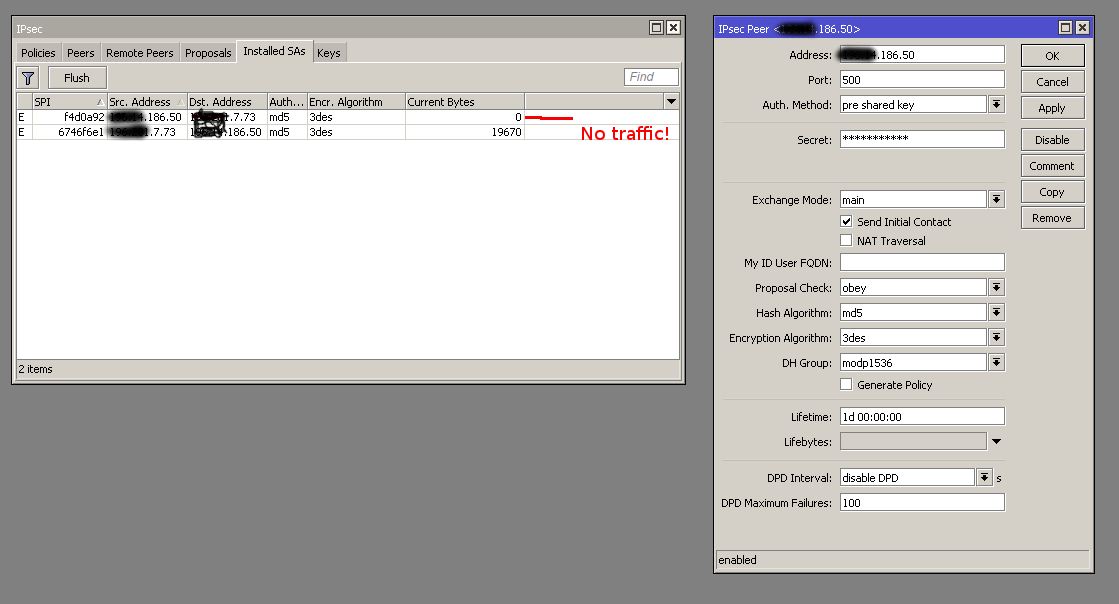 I've received various suggesions from IPsec experts and MikroTik themselves implying that the problem is at the remote side. However the situation is greatly compounded that 5 other sites are working and that the client's firewall is under change control. The setup also always worked for many years, so they claim it cannot be a configuration error on their side. This suggestion seems plausible but I cannot implement due to change control. I may only change the client side:

Make sure the IPSec responder has both passive=yes and send-initial-contact=no set.

This did not work.

I am pasting additional screenshots with the Fortigate configuration and what we believe are the Quick Mode selectors on the Mikrotik side. 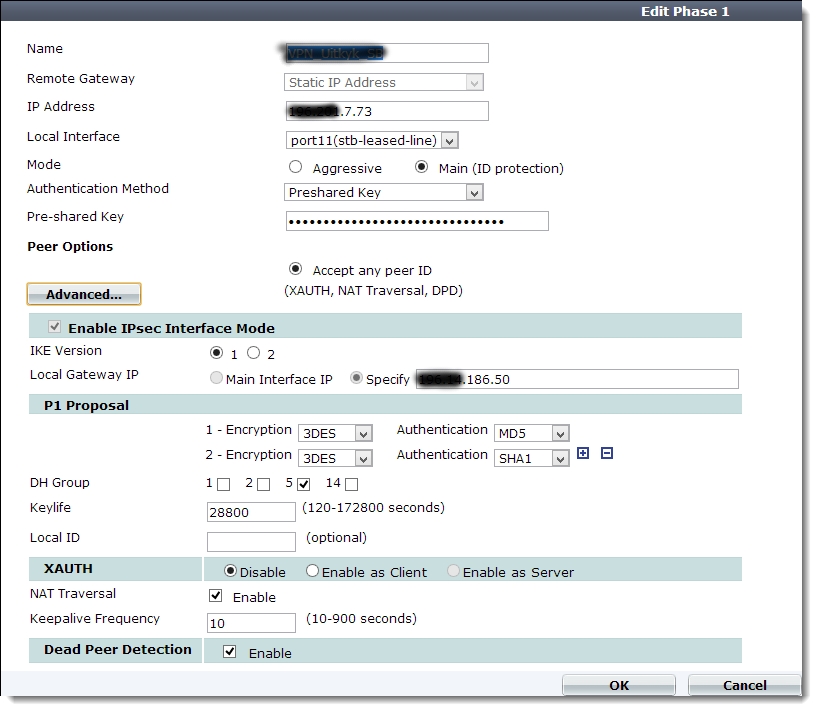 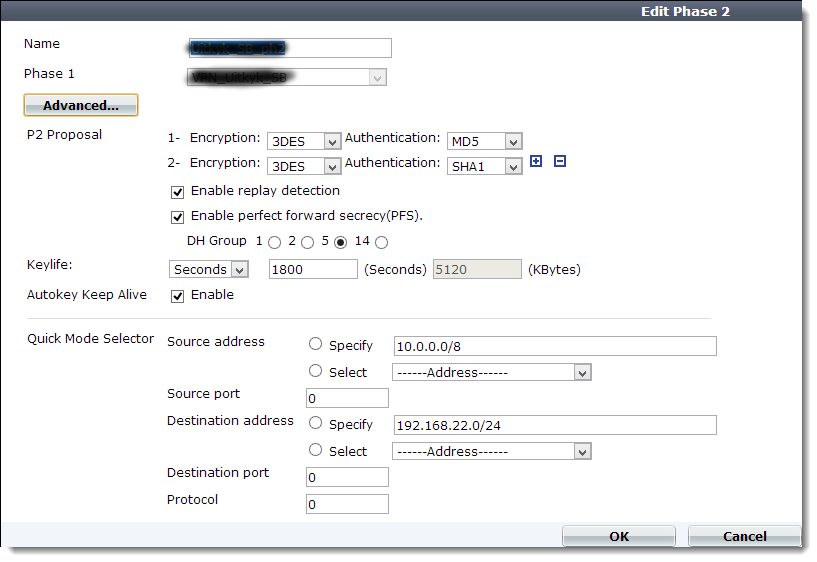 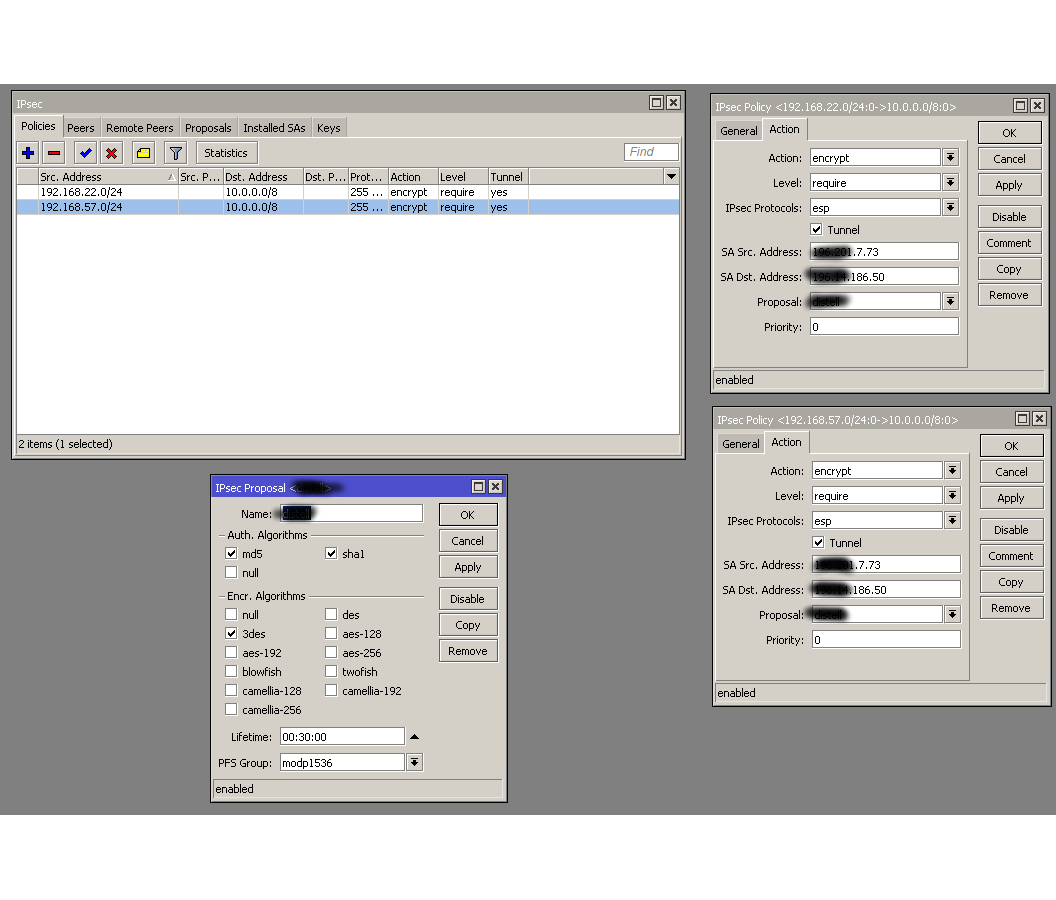 Let me re-iterate that I don't think it's a configuration problem. I speculate it's a timing problem whereby side A or side B tries to send information too aggressively making the negotiation of the information (e.g. the SPI) out of sync.

Sadly I have to give up on this issue. Happily everything is working. Why it's working is still a mystery, but to further illustrate what we did I post another image inline.

We fixed it by:

So add this fix to the list of things we've done:

So I postulate that there is an incompatibility on either Fortigate or MikroTik side which only happens at very random situations. The only things we haven't been able to try is upgrade firmware on Fortigate. Maybe there is hidden corrupt configuration value or timing issue invisible to configurer.

I further speculate that the issue is caused by timing issues causing SPI mismatch. And my guess is the Fortigate doesn't want to "forget" about the old SPI, as if DPD is not working. It just happens randomly and from what I can tell only when endpoint A is Fortigate and endpoint B is MikroTik. The constant aggressive attempts at trying to re-establish the connection "holds" on to old SPI values.

I'll add to this post when it happens again. 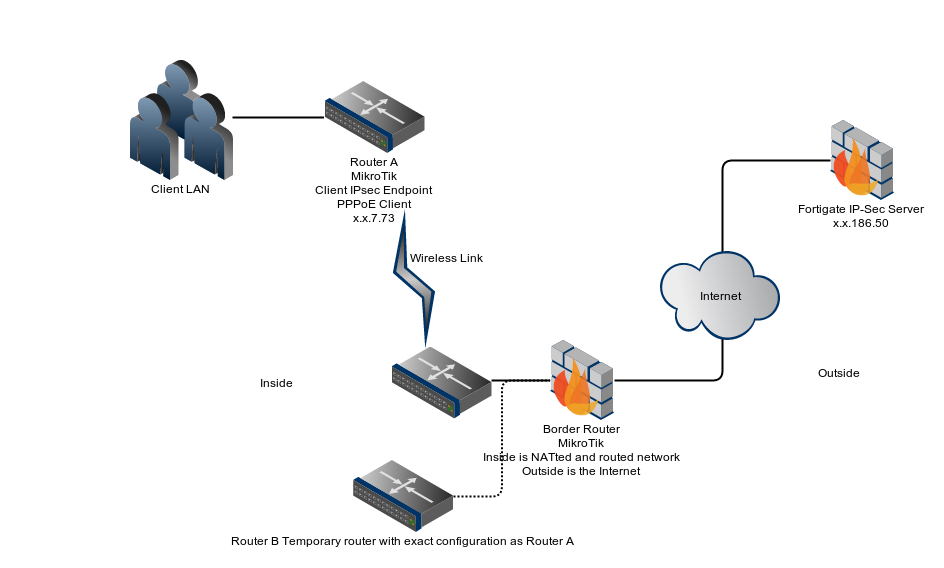 As expected it happened again. As you may recall we have 6 MikroTik client IPsec end-point routers configured exactly the same connecting to one Fortigate server. The latest incident was again to a random router, not the one I posted here about originally. Considering the last fix where we installed this duplicate router, I took this shortcut:

Looking at @mbrownnyc comment I believe that we are having an issue with Fortigate not forgetting stale SPIs even though DPD is on. I will investigate our client's firmware and post it.

Here is a new diagram, much like the last, but just showing my "fix": 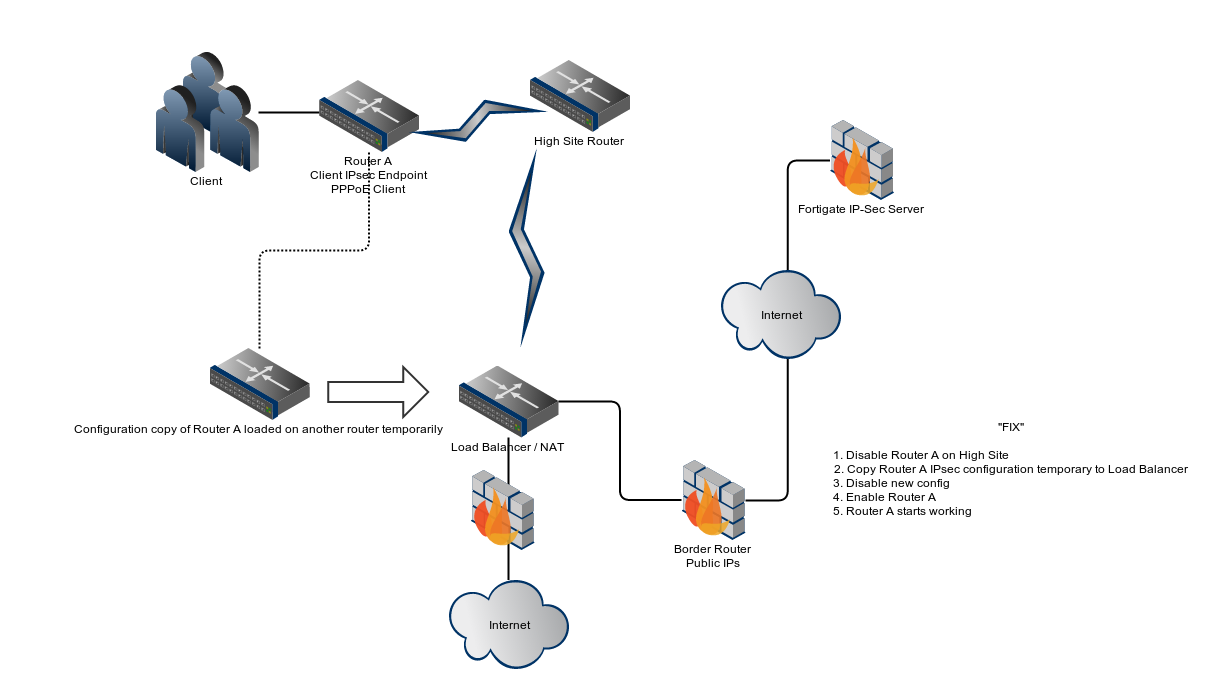 May not be the cause of your problem, but may be useful information for other users. We had a slightly similar problem with a VPN between a Mikrotik and a Sonicwall. Traffic would randomly stop, requiring the SA's to be flushed.

In the end we realised that the Sonicwall was creating a separate SA for each network policy (by the look of your screenshot it looks like you have 2 policies/subnets going over the VPN). I don't know if this 'SA-per-policy' setting is hard coded or configurable as I didn't have access to the Sonicwall.

Our Mikrotik was using the 'require' level for the policies (the default, and seen in your screenshot). This causes the router to create a single SA with the remote peer. When sending traffic for any of the policies for that peer, it will use this same SA, regardless of the src/dest subnet.

This basically meant that it worked as long as we only used one subnet. As soon as our Mikrotik tried to send traffic for the second subnet, it would send over the existing SA (which as far as the Sonicwall is concerned is for a specific subnet pair), the Sonicwall would complain, SA sequence numbers would go out of whack and the whole lot stopped. (In our case the customer got 'replay' errors on their end)

In the end it was as simple as changing the policy Level to 'unique', so both ends used a unique SA for each unique subnet pair. The tunnels were perfectly happy after that.

I know that you have checked this (just like I did when I had a similar, but completely different intermittent problem), but make sure that you don't have a duplicate IP address that router A is sharing. This would give you the intermittent problem when your high side router does an arp lookup for router A and gets confused. You would think that dup Ips on routers would give a consistent error, but it doesn't.

Not the answer you're looking for? Browse other questions tagged ipsec mikrotik vpn fortigate routeros or ask your own question.

2
How do I troubleshoot an IPsec tunnel (from a cellular router to a public server)?
0
RV082 Gateway-Gateway VPN Won't Connect
0
How to configure Fortigate 60D as L2PT/IPSEC client
0
Site to Site Ipsec VPN - Tunnel is Up but can't get to route packages from left to right
0
openvpn dynamic (downloadable) configuration
0
Fortigate to Azure - working VPN suddenly stops working
0
Strongswan works on embedded device via ethernet but not with 4G modem