I'm working with an unhealthy Windows 2008 R2 Terminal Server configured in a vSphere environment. It currently has 4 vCPUs and 32GB RAM. No overcommitment.

The concurrent user count on this server has risen sharply in recent months (~70), and is possibly over the recommended level. Due to the applications used by the users on this system, splitting this into multiple servers will be a challenge beyond the scope of this question.

However, at certain points during the week (and now, almost daily), new user logons produce the following errors: Event ID 1500

Windows cannot log you on because your profile cannot be loaded. Check that you are connected to the network, and that your network is functioning correctly.

This remains until some users log off, sessions are manually disconnected or the system is rebooted entirely. 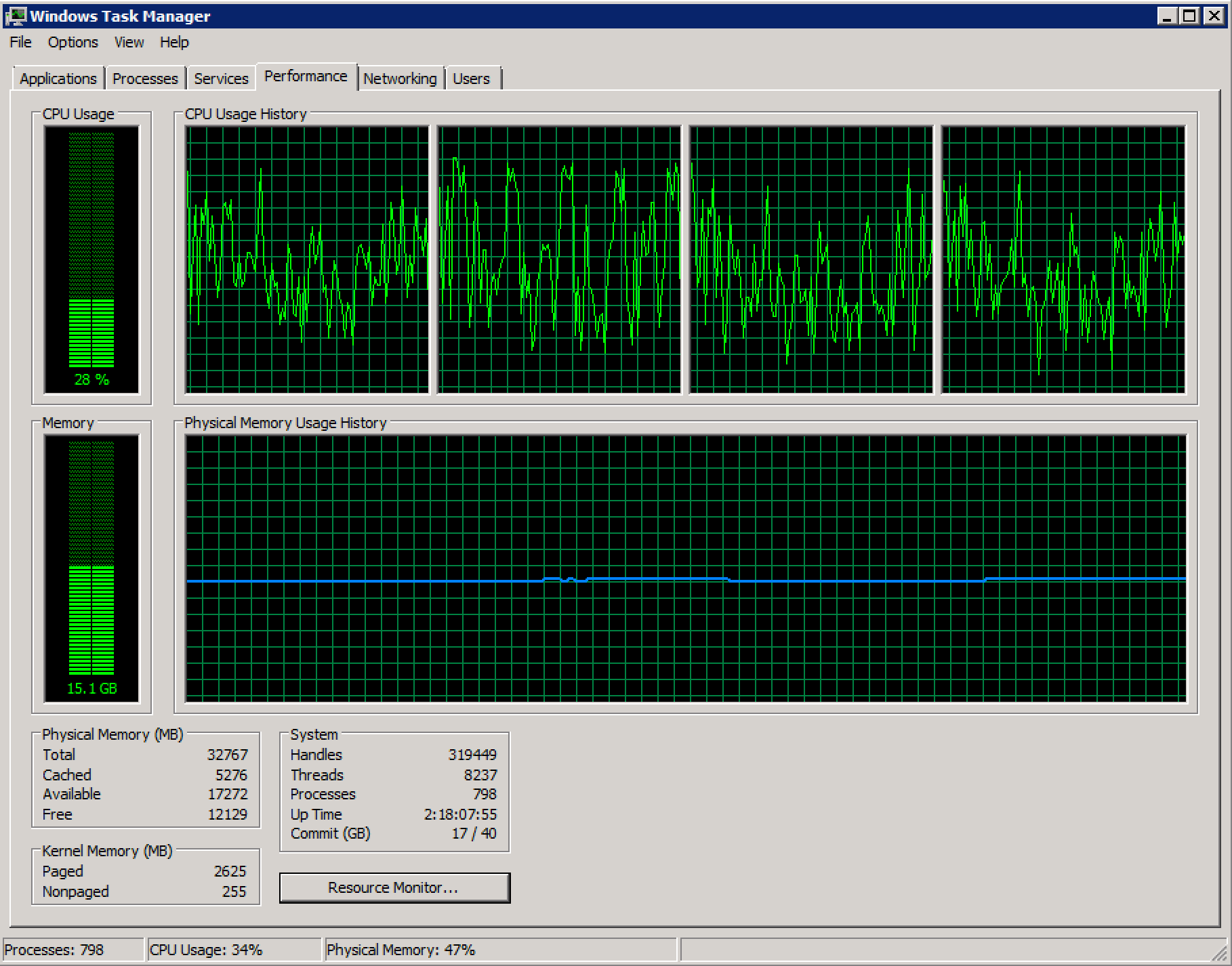 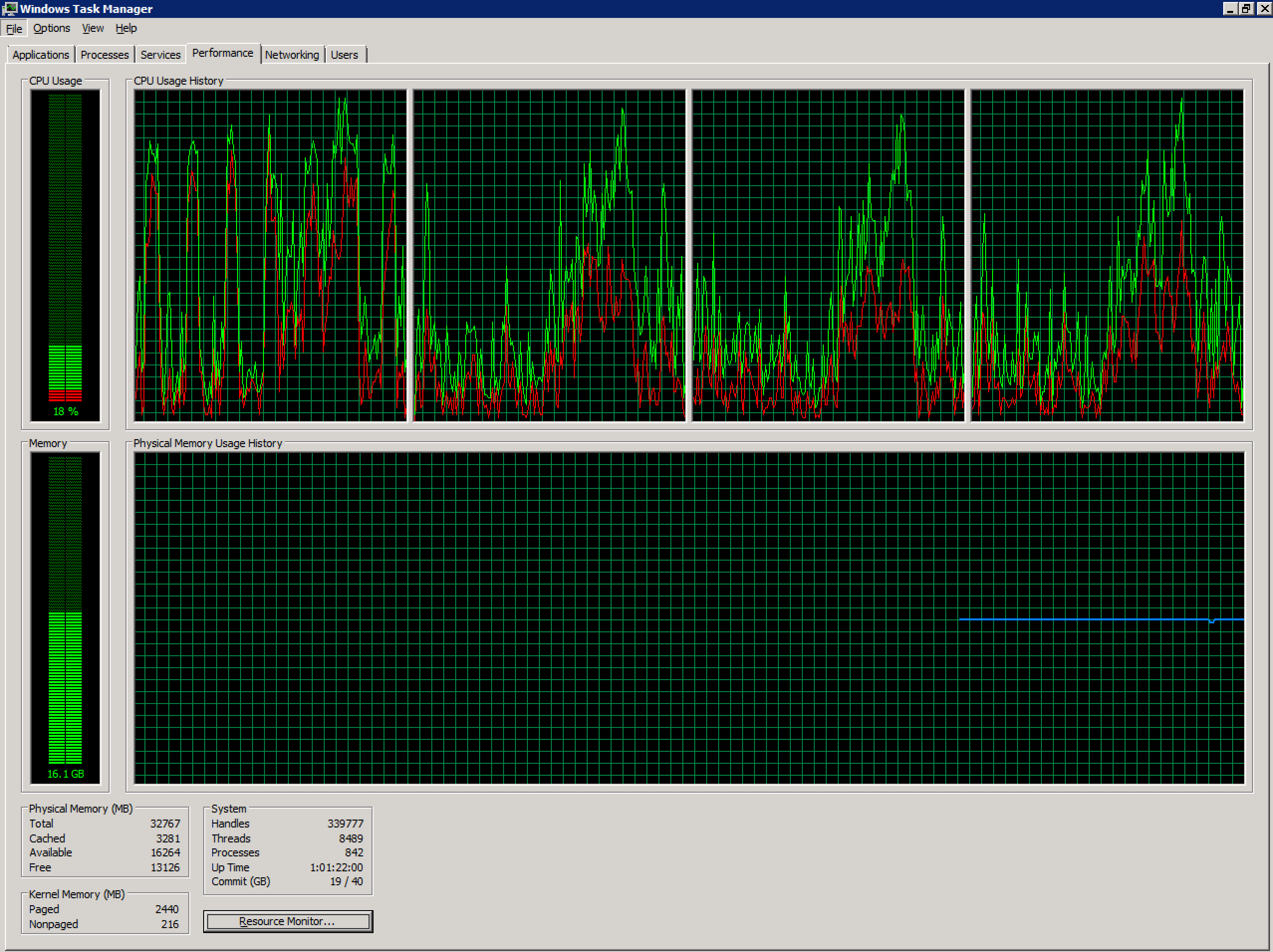 This has been solved.

I began to examine the registry because increasing CPU and RAM resources on the virtual machine did not resolve the issue.

I was pointed to Microsoft's dureg tool to estimate the registry's size. Browsing via regedit, I encountered issues opening the keys under HKEY_USERS\.Default\PRINTERS. Using dureg, I started probing under that hierarchy. 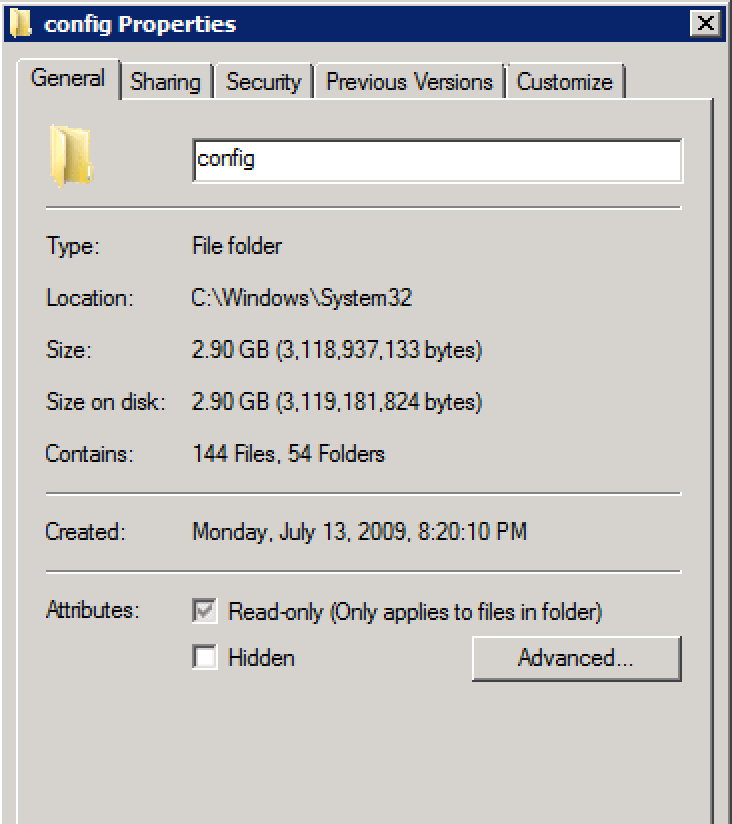 Printers were the problem. The cause and fix are detailed in:
The size of the "HKEY_USERS.DEFAULT" registry hive continuously increases on a Windows Server 2008 R2 SP1-based server

This apparently stops the growth, but the keys and registry need to be compressed to reclaim space.

Hmm, a few steps... kinda tricky to do remotely during production hours. I tried to reach out to my resident Microsoft expert to complete, but he was busy chasing down some SCCM or SCVMM issue somewhere. Reading through some Citrix-related forums, I took note of a tool that could perform the above with fewer steps...

So I took a virtual machine snapshot, then downloaded and ran freeware registry compression software (Tweaking.com); despite the overwhelming sound of the collective groans of Microsoft systems engineers everywhere...

note the 1.4GB saved in the default Config... 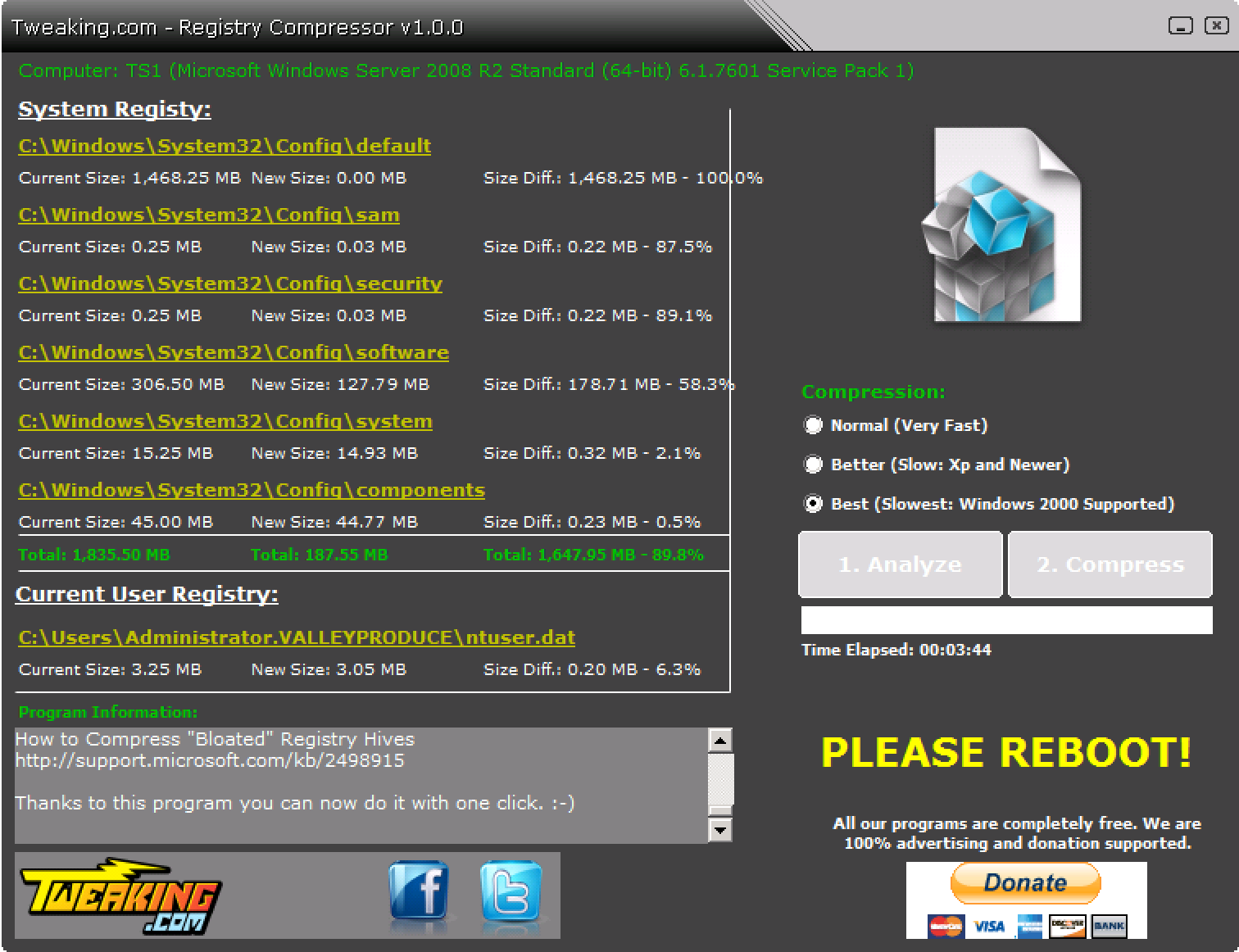 Following a reboot, all was well. The user count reached 86 with no ill effects and no profile-related errors. I've monitored the printer registry hive and it's held stable.

In Windows Server 2003 that error was a result of kernel memory exhaustion. Because you're dealing with Windows Server 2008 R2 I'm not sure how closely related the cause of the problem is to the cause in W2K3, but I would bet that it is a memory issue due to the number of users and processes. I would take a look at Nonpaged Pool memory exhaustion as the probable cause. In addition, the number of procceses is at almost 800, which is quite high. MS would probably tell you to reduce the number of processes, which can only be done by reducing the user load.

This article has some good information regarding memory usage in Windows and how you can view the Nonpaged Pool limit to see if that's the cause of the problem:

Start up Windows Performance Monitor to monitor the various counters:

And see if one of these peaks when you get a failed login.

Also: something is causing high kernel CPU% on your system - you should investigate that to see if it leads you to a related problem.

The User Profile Hive Cleanup service may help out here as it "helps to ensure user sessions are completely terminated when a user logs off".

Well, from what I've read about RDS capacity planning in Server 2008 R2, you might just be running your poor terminal server on insufficient resources for the number of users you have using it. In particular, I notice that you have 80 users on 4 vCPUS, and MS recommends 1 core per 15 users.

We always felt the need of Hardware capacity guidance and sizing information for Terminal Services or Remote Desktop services for Server 2008 R2, Whenever I am engaged in any architectural guidance discussion for RDS deployment i always get a question what needs to be taken into consideration while deciding the hardware configuration and to do capacity planning.

Here are some bullet points which I recommend to my partners and customers to consider:

In addition to that, Microsoft has just released a whitepaper on Capacity Planning in Windows Server 2008 R2.

I have very little time so I'll just do a sketchy answer and hopefully flesh it out later.

When I was doing spells in Citrix teams I recall us trying to level to 15-20 users per server, but those had some heavy apps running. These days of x64 we load more users, but 70+ does sound like a lot.

The perfmon counter maxing out was not rarely context switching, it would floor a server whilst other counters like RAM, CPU etc looked good. Possibly that could be a reason (the server can't allocate resources before timing out due to excessive context switching). Here are two ways to monitor context switching:

Also you might find something of use in the capacity planning guide, you find a link to it in this blog post.

When I can pull time on this answer I'll do so, I'll just add here throwing in a caution on all time based measurements within a vSphere virtual machine.

Due to how the vCPU has been abstracted from the physical CPUs the vCPU does not have a clue what time it is (one virtual second may be more or less than one real (or at least physical) second. As a consequence, all time based perfmon counters (CPU time, context switches/sec and so on) are inaccurate (sometimes even wildly so), even if they may serve as very coarse grained indicators.

To verify this, compare any native time based CPU counter within the VM with its counterpart on the vSphere host for that VM. For this reason VMware publishes some counters for CPU (and Memory which also is inaccurate from the guest perspective) via VMware tools into two VMguest perfmon objects.

Thus the correct time based values are made available from within the guest perfmon, but only if one looks at the VMware published objects counters.

I just thought this basic info a bit relevant as the answers so far are focusing on time based measurements from within a vSphere virtual machine, where this is in some cases a crucial circumstance for correct analysis. It also of course relates directly to the theme of this particular (unfinished) answer and its comments. It may be of use to someone.

As soon as I get time I'll edit in links to the whitepapers etc which elaborate on this, and the exact counter paths\names. Naturally it is all googleable too.

I would suggest implementing WSRM (Windows System Resource Manager). When there are a ton of apps, connections, services running on one host the system doesn't know that everyone needs to play nice together. Windows Server naturally tries to use all of it's resources to complete everything all the time unless it is made aware...enter WSRM.

By implementing WSRM you can set resource limits by all sorts of variations to make sure there is an even playing field for everything running or users connected. From your notes this doesn't seem like it is a ESX/vSphere issue but rather too many connected users who are constantly competing for everything. You will have to test WSRM to find a happy medium of balancing resources among everything but also not affecting performance levels everyone has grown accustomed to.