I am trying to grant an IAM group the ability to edit our EC2 Security Groups, but I have been unable to get this working without granting access to everything in EC2.

I have tried several versions of this:

But when I login with the IAM user, I get a message in the Security Group page saying "You are not authorized to perform this operation."

I do know that the user/group is working because if I select the IAM Policy Template for "Amazon EC2 Full Access", the user can access everything in EC2.

I obviously do not have a lot of experience with IAM, any help would be greatly appreciated.

For this to work, you need to explicitly ALLOW the following:

The above JSON policy basically stipulates that the user ONLY has access to the above. They will NOT have access to anything else. That includes ec2 instances, S3, IAM, cloudfront, etc.

If you want to limit editing to a single security group, I think that you need 2 statements, the following worked for me:

DescribeInstance may not be needed but in my case I wanted it, so haven't tested without it

Looks like your security group is perhaps being used by an instance or some other EC2 resource. Can you try:

I was looking for an answer for a question that @nsij22 asked in the accepted answer's comments. Unfortunately, looks like that is not possible. According to IAM Policy Simulator, only the following actions from @DevMan14's answer can be used with specific resources:

This action does not support resource-level permissions. Policies granting access must specify "*" in the resource element. 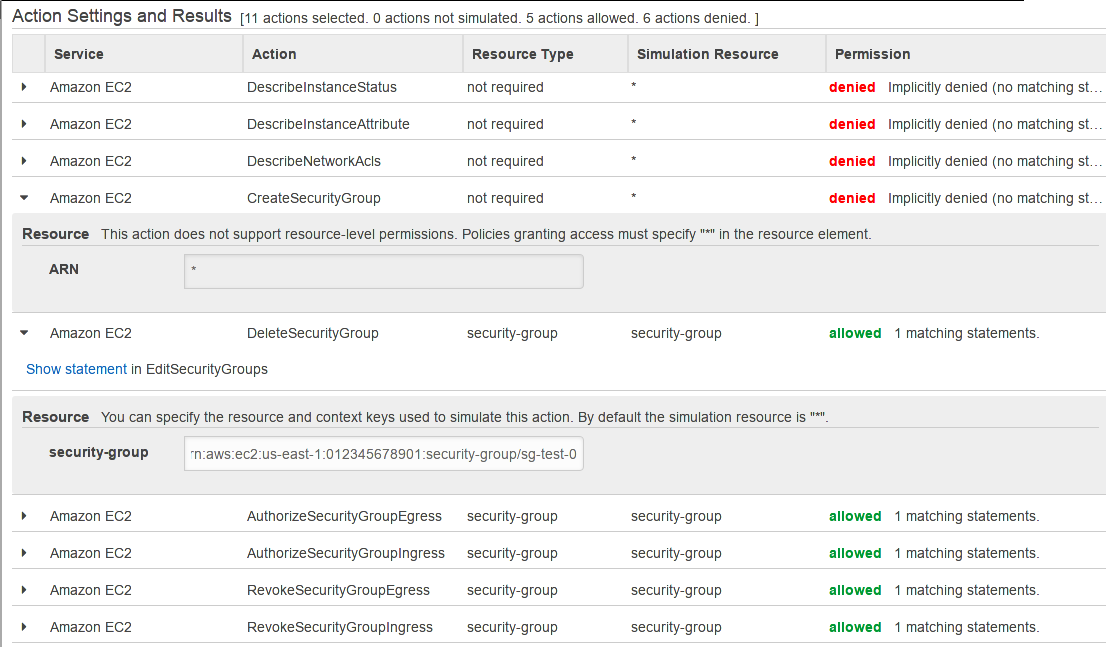 All "allowed" and "denied" are same, so I collapsed them.

The answer given by Scott Moore and selected as the correct answer at the time of writing does not solve the issue anymore. Not Scott's fault, AWS is frequently changing many things.

We had followed an AWS document and created a custom policy which had been working just fine since the last 1.5 years or so and suddenly today morning our clients started facing issues in editing the Security Groups and so I stumbled upon this thread in order to try possible solutions.

I eventually ended up creating a custom policy from scratch as it seems something critical has been just deprecated from AWS IAM policy side today morning; so the policy that works at the time of writing for me is :-

The question never focused on allowing to create new security groups or delete existing security groups and so that has not been added in the policy but can be added by the reader if their requirement demands for it.

Not the answer you're looking for? Browse other questions tagged amazon-ec2 amazon-web-services amazon-iam or ask your own question.

2
amazon RDS Security Groups Issue
21
How to specify an IAM role for an Amazon EC2 instance being launched via the AWS CLI?
3
How to add SPECIFIC CloudFormation, EC2, RDS and S3 Access Restrictions in AWS - IAM
0
Find minimal policies in AWS that user needs
5
How can I chain AWS IAM AssumeRole API calls?
0
How to restrict IAM policy to not allow stop/terminate an EC2 instance but can create new instances?
1
AWS IAM role for use within a classroom
0
IAM policy for ansible dynamic inventory in ec2