I'm plagued by a seemingly simple but actually troublesome problem, so I ask for help here.

I installed an instance of VMware ESXi 5.1 inside VMware Workstation to learn about various ESXi features. Let me call it vESXi machine. My problem running vESXi is, everytime I suspend the vESXi at night and resume it the next day, the time in vESXi lags. That is, if I suspend vESXi at 22:00 last night and resume it today morning, I will see vESXi reports it is still 22:00 last night. I know this is normal because a PC system keeps its time by counting hardware timer tick interrupt. So, I decide to have vESXi use NTP to sync with an NTP server. My NTP server is a Windows Server 2003 domain controller running on the same LAN segment.

I quickly observe the problem: my vESXi never sync its time with the Window NTP server, no matter how long I wait.

You may suggest that I shutdown vESXi instead of suspend it, but I really love the suspend feature provided by VMware Workstation, which is really quick and fluent.

I've read http://kb.vmware.com/kb/1035833 which provides the workaround(some tweak to make it work with Windows NTP server), but that KB article creates more baffles at first reading. What's more, it is really cumbersome to tweak every vESXi if I have quite many of them.

Q1(primary): What on earth does these statements mean?

By default, an unsynced Windows server chooses a 10-second dispersion and adds to the dispersion on each poll interval that it remains in sync. An ESXi/ESX host, by default, does not accept any NTP reply with a root dispersion greater than 1.5 seconds.

to /etc/ntp.conf . What does that line mean? The ntpd.conf man page http://linux.die.net/man/5/ntp.conf seems to say nothing about tos or maxdist.

Q3: Since the ESXi NTP client(daemon) does not sync successfully with the assigned NTP server, does ESXi generate some log message explaining the detail?

Q4: Is there any way to force ESXi's ntp client to immediately sync with a specific NTP server? Even a manual operation is welcome. I don't know whether the bundled ntpd command can do this.

Q5: Without a manual /etc/ntp.conf tweak on ESXi, what kind of NTP server can I set up to provide time source to my vESXi box? Linux ntpd or what? any special configuration on server side required?

Thank you in advance.

After reading NTP FAQ and doing quite some experiments, I have confirmed the following facts:

So: My practical problem regarding time-keeping for vESXi has been solved(preferring to sync time with a Linux NTP server).

Now the focus is on Q1. What's wrong with Windows NTP server? I hope some one can help explain those two statements in Q1 from NTP protocol's perspective.

I express my thanks to quadruplebucky and Reality Extractor for their useful information, although their answers to my specific problem is not quite accurate.

If the time difference is too great NTP will not sync. That's expected behavior.

Normally this is not an issue as the VMware Tools installed in a guest OS will sync the time to the host regardless of how far the time drifted. Since you are using the experimental and unsupported option to run ESXi as VM you don't get the VMware Tools functionality, and hence it doesn't sync.

For tos maxdist you can review Automatic NTP Configuration Options but those won't solve your issue because the time is just too far off.

That's a pretty perverse setup there, ESXi inside VMWare Workstation. Hats off to you.

NTPD won't make enormous time adjustments like that if it "thinks" it's been running (by, say, being put to sleep). ESXi, unfortunately, doesn't seem to have a ntpdate binary (which you could just run via cron every half hour or so and disable ntpd entirely).

I have noticed that ntp tends to correct itself if you stop and start the service (maybe a few times).

Ugly workaround, but maybe a cron job to stop/start ntpd?

Here's a link on adding a cron jobs to ESXi

The commands to stop and start are

I think Microsoft does this deliberately and announces this behavior in http://support.microsoft.com/kb/939322/en-us .

The image below shows the 10-second dispersion field(captured with Microsoft Network Monitor 3.4). 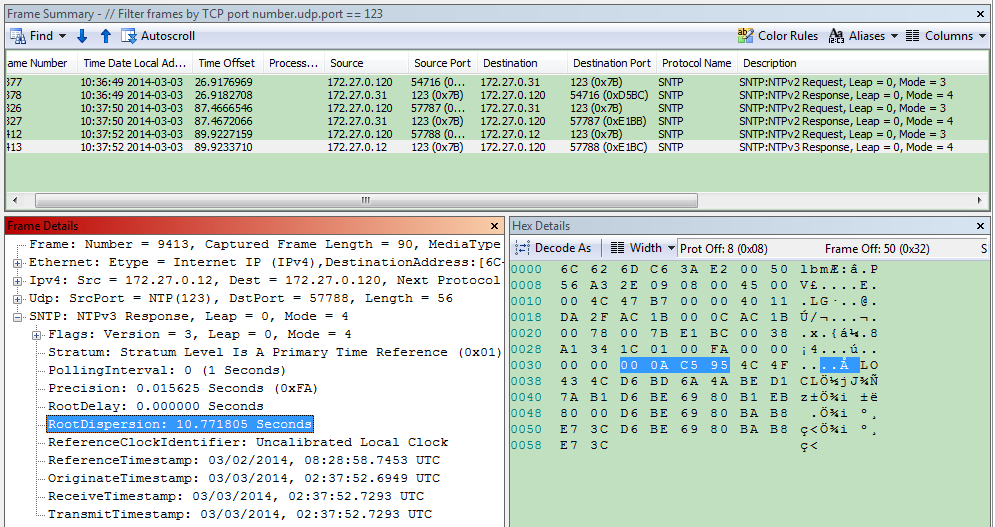 Not the answer you're looking for? Browse other questions tagged vmware-esxi ntp or ask your own question.

41
Windows Server unable to synchronize NTP time reliably
2
NTP: ntpdate to sync time between the PCs on a private network
10
What are the disadvantages of disabling tinker panic 0 in NTP?
2
Why does ntpd need to bind external interfaces to sync the local clock?
4
NTP: Linux client won't sync with Win7 server running ntpd ( not w32time)
27
Force systemd timesyncd to sync time with NTP server immediately
0
NTP client not able to auto sync with server