Amazon: How do I know if I need Provisioned IOPS?

We recently moved to Amazon Web Servers and are still learning our way around. Our EC2 Web instance and our RDS MySQL instance (right now we only have 1 of each) seem to be chugging along okay. But I was wondering if we could get even better performance out of them.

We do run a very small site, but certain pages still take awhile to load because of lots of aggregation on the MySQL side. 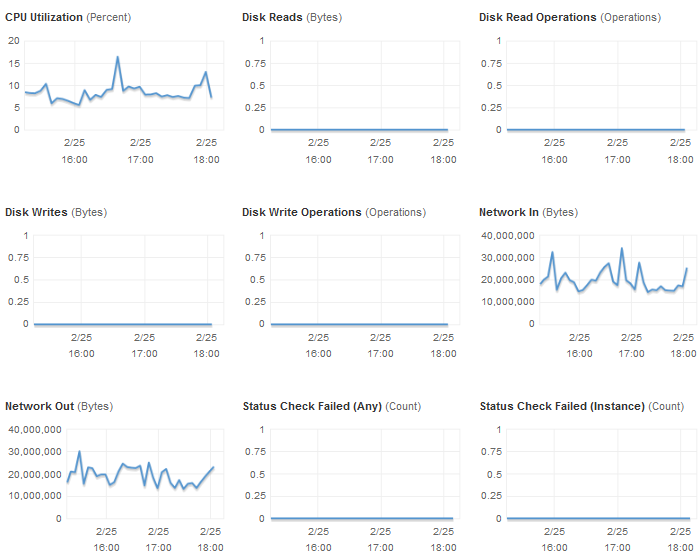 Of these, only the DB (db.m1.large) is "Provisioned IOPS Optimized".

Yes. You benefit from the PIOPS volumes being SSDs under the hood. Optimized instances have dedicated network to the EBS servers, so they get consistent performance. Non-optimized instances interact with EBS along with the rest of their network traffic, so heavy bandwidth use on the physical host can slow you down.

As a point of reference, a standard EBS volume will generally provide about 100 IOPS on average, with the ability to burst to hundreds of IOPS on a best-effort basis.

With this in mind, I suspect you'll see performance improvements from PIOPS on the RDS, as you're averaging 50-100 writes and 200-400 reads on the RDS volume - you're likely in that best-effort burst state most of the time.

Your web server is doing zero IOPS from the charts, so I'd guess everything's already living happily in RAM and not hitting the disk. Do check that it doesn't have a secondary volume you should be looking at instead, though.

Not the answer you're looking for? Browse other questions tagged amazon-ec2 amazon-web-services amazon-rds iops or ask your own question.

0
MySQL Config Settings for an EC2 Micro Instance
5
Amazon RDS Pros/Cons of Multiple DBs per instance
2
Do EC2 EBS provisioned iops volumes set an iops cap, not just a minimum?
11
AWS: Multi-region setup using single RDS instance
5
How to troubleshoot slow performance on AWS EC2/RDS?
8
AWS RDS db.t2 instance performance thresholds & monitoring
2
Why is there a delay with executing queries on my RDS instance
2
Amazon RDS: Why do I get more IOPS than I have provisioned?