Several years ago I built and deployed a system on XP that involved a custom written service that talked to a local 2008 SQL Express instance (that also had a CLR dependency). At the time I set up the custom service to be dependent on the Express service starting up, and all seemed well.

Fast forward to this week where my customer calls me in to debug why things aren't working properly (and apparently hadn't been for a while - a very long story).

What I saw was that when rebooting the machine, 7 out of 10 times everything came up fine. For those 3 out of 10 when it was failing, my custom service was complaining about things like:

But then when manually restarting my custom service (well after the computer had been rebooted), it came up error free.

So it seems that when XP says that the SQL Express system was up and running, it occasionally wasn't fully up and running, and that there is an unexpected race condition which is killing my assumptions about the XP service dependency order.

What does it mean when the SQL Express instance announces to the XP service system that it is up and running?

Does it mean all components have been initialized and are ready to work, or is more of a "Hello world" statement?

Finally I also noticed that my client had loaded up the computer with several other pieces of software which probably exposed/caused the race condition that I am seeing. And yes we also started discussing what it would take to move them off XP and onto W7.

One option is to set the recovery options for the service. After it fails have it restart after a short period. 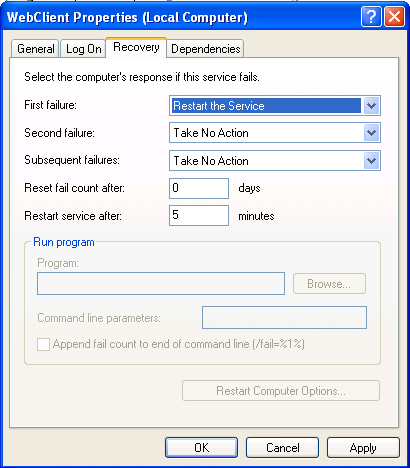 Not the answer you're looking for? Browse other questions tagged sql-server-2008 windows-xp windows-service or ask your own question.