How to route traffic over an active VPN tunnel by domain name?

It seems to me that once connected, the VPN gets a local IP address like 192.168.1.101 (which I've assigned statically on the server in the dial-in tab of my user account properties), and targetting that address does route the traffic over the VPN. It seems that traffic targetting "my.server.com" is never routed over the VPN and is treated separately from the VPN's IP address, and I have to use that VPN IP address to route things over the VPN. The only benefit to that is the firewall can be configured so that file-sharing traffic can originate only from that IP address.

There are two problems with that setup:

How can I solve this problem?

Update: I also notice the following when I have 2 VPN's connected, one with static IP 192.168.1.101 and the other with 192.168.1.102. With both VPNs established and both set to NOT use the default gateway on the VPN, and both VPNs showing those two independent IP addresses in their connection status, Explorer gets confused, cannot connect to the 2nd one, and then if I open a new window and try to go to the 2nd address, it seems to equate it with the first one and from then on both addresses (101 and 102) access the same folder on one server over the first VPN. It makes no sense.

I figured this out on my own.

In order to route based on the FQDN, one may need to run a DNS server on the client capable of detecting when a VPN is active on that FQDN's WAN address. When it detects an active VPN connection, it could resolve the FQDN to the VPN tunnel address instead, so that applications (web browsers, etc.) would receive the VPN tunnel address instead of the WAN address of the server. Since that would pose issues for SSL certificates that show which IP addresses are valid, one would really need a VPN-aware network driver capable of automatically and transparently tunneling data from applications over the VPN tunnel. It could be done, but I don't know if such intelligent network drivers exist. According to this response to a bad answer, you CAN ROUTE BASED ON FQDN with the appropriate configuration as I suspected:

As for the issue of duplicate Server IPv4 addresses being assigned to different VPN servers in a Windows 7 client, this appears to be by design. In Windows Server 2008/2012 Routing and Remote Access Services (RRAS), the server utilizes an IPv4 router which can be configured to use a static address pool like so. This static pool will determine the Server IPv4 address on the client. Here I've set my second server to use 192.168.2.0/24 as its subnet, so it will receive a server IP of 192.168.2.1 on the Windows 7 client. 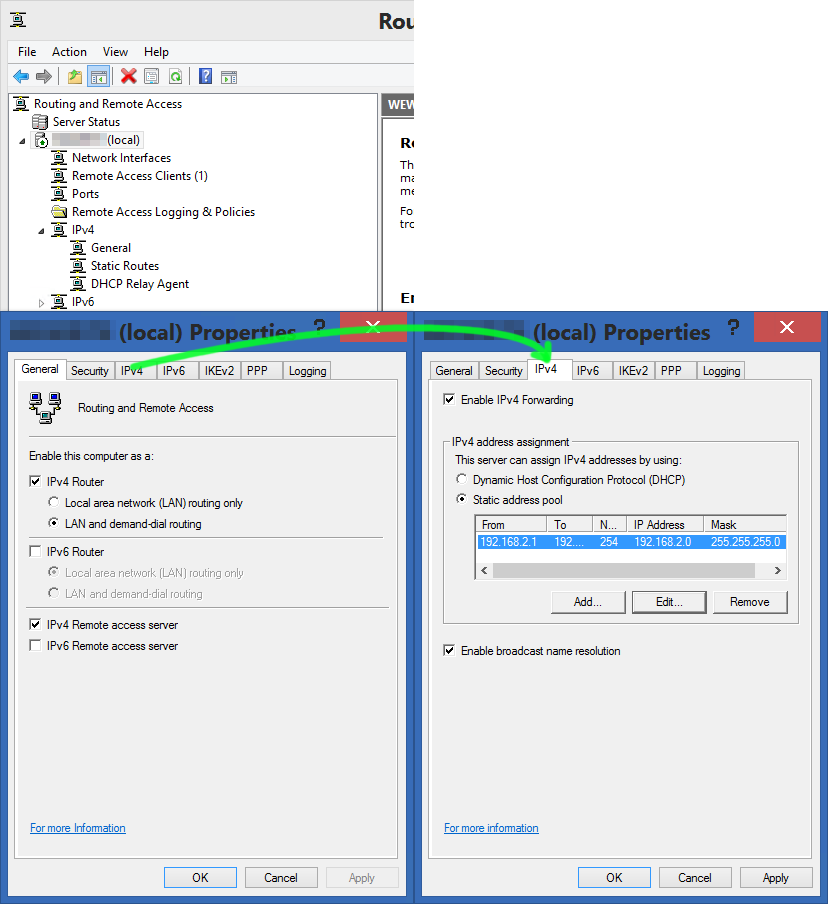 My user account on each VPN server is assigned a static IP address in the Dial-In tab of the user properties under computer management. This will become the client's IPv4 address on the VPN. 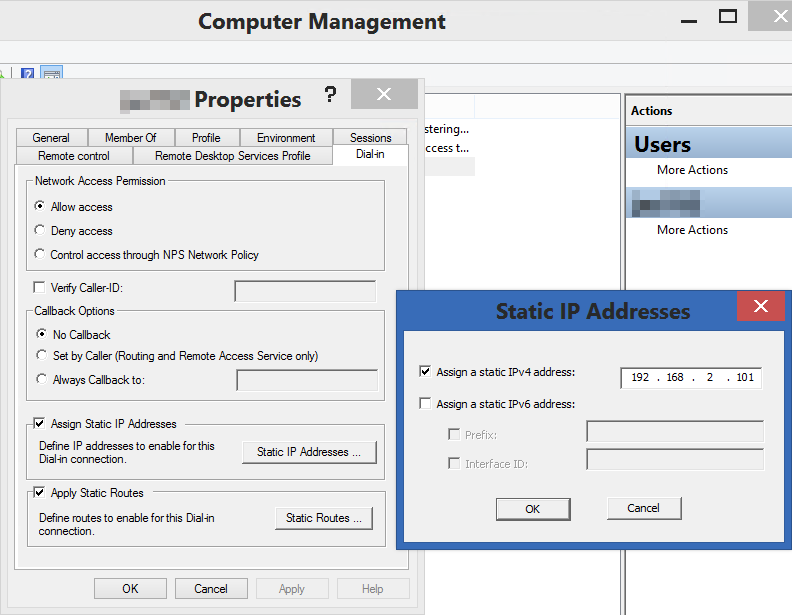 Finally, to ensure that file sharing traffic must originate from the server's VPN subnet only, the appropriate protocols/ports in the firewall can have their remote IP restricted to to the assigned subnet: 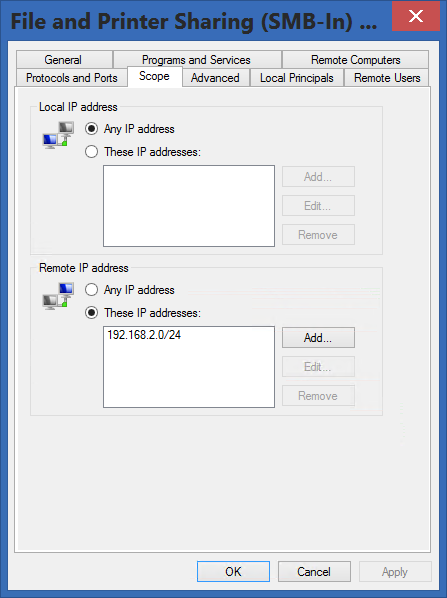 Unfortunately, we cannot use the FQDN such as \\my.server.com\sharedfolder\ because Windows is not smart enough to realize that having a VPN connected to that IP address implies all traffic on all ports to that address except the encrypted VPN packets themselves should be be routed through the VPN IP. A side of effect of not being able to use the FQDN for the file sharing path is that windows may not keep the connection alive and will assume that it can be reestablished quickly as a local address, when in reality it will idle out after a minute and then take 30 seconds to reestablish a connection to the shared folder. This can be resolved by setting a higher idle timeout in the registry. The default idle timeout for a network share defaults to 600 seconds (10 minutes). To keep the connection alive longer, add a DWORD registry value named "KeepConn" to the registry key "HKEY_LOCAL_MACHINE\SYSTEM\CurrentControlSet\services\LanmanWorkstation\Parameters", and give it a higher value (in seconds) such as 3600, which would be an hour. According to the link:

Increase the value of this entry if your application closes and opens Universal Naming Convention (UNC) files on a server less frequently than every 10 minutes. This decreases the number of reconnections to a server.

UPDATE: I forgot to mention that although file sharing over VPN using purely built-in Windows 7 and Windows Server 2012 features, there is an extra step necessary for Windows Server 2008 because of some bug/feature where traffic on the SMB ports appear to be blocked on the default network adapter independently of the firewall. You must install the microsoft loopback adapter, which will then function identically to the default interface aside from allowing SMB traffic, so once you get it installed it should look like this. Then instead of connecting to the share on 192.168.1.1 (the Server's VPN address), you connect to 192.168.1.2, which is the loopback adapters address: 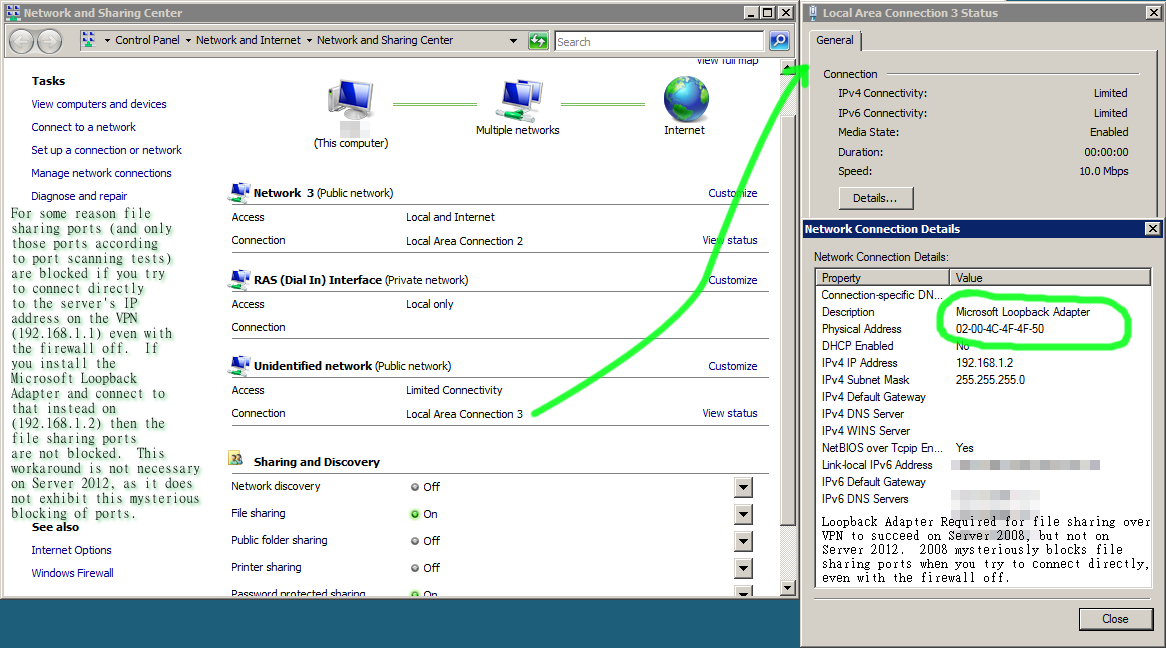 Instructions on how to install the loopback adapter can be found here: http://blogs.msdn.com/b/virtual_pc_guy/archive/2005/10/04/477195.aspx

Not the answer you're looking for? Browse other questions tagged windows-server-2008-r2 vpn routing or ask your own question.

0
How can I route some (but not all) web traffice over a VPN tunnel. Sonicwall appliances on each end
2
Route all wlan0 traffic over tun0
0
Laptop connectd to 2 VPNs (1st for Internet over WiFi, 2nd to access shared folders on another network) is failing to route traffic over 2nd VPN
0
How to access VPN server itself over a VPN set up with RAS?
2
route http and ssh traffic normally, everything else via vpn tunnel
6
How do I route all traffic from clients connected to the DD-WRT to its OpenVPN tunnel tun0?
0
Route Internet traffic to Azure site-to-site VPN tunnel on Sonicwall TZ205
0
Traffic refuses to go over VPN interface
0
Mikrotik - Route Specific IP over VPN