I would like something not too ugly, so a gnuplot graph is a bit crude, but if that's the only option I'll take it nonetheless.

After half an hour of googling, I just havn't been able to find a simple tool to do that without extensive configuration.

I thought about using conky and asking it to render to a file instead of showing the graphs on the screen, but I couldn't find such an option for conky. The only solution I thought of would be to start a dummy Xorg session, let conky run on that, and periodically take screenshots.

I also saw plenty of blog posts etc. about using dstat or similar tools, but these generated text reports, not graphs.

Is there a command-line tool that is very simple to setup that can generate (pretty) GPU graphs and similar graphs, without requiring extensive configuration from my part?

The problem with the other tools cited so far (rrdtool, mrtg, zabbix, orca) is that they are enterprise-grade software designed for full-time network administrators. I just want something simple that I can run on a small box and set-up within a matter of seconds instead of spending days to configure it.

And I just realized I asked on serverfault instead of superuser like I meant to, so that explains the answers I got :) Thank you all, and sorry for loosing your time, I'm requesting this question to be closed / migrated to superuser.

Think about this... You need some way to track history in order to provide an input to the CLI-generated graphs. This is where something like RRDTool helps.

There are tools like collectl that will collect data and organize it for another graphing utility.

There are pretty solutions like NewRelic that aren't CLI-based, but provide some better insight into system performance...

But I'm old school... I still use Orca for this.

But the graphs are pretty. 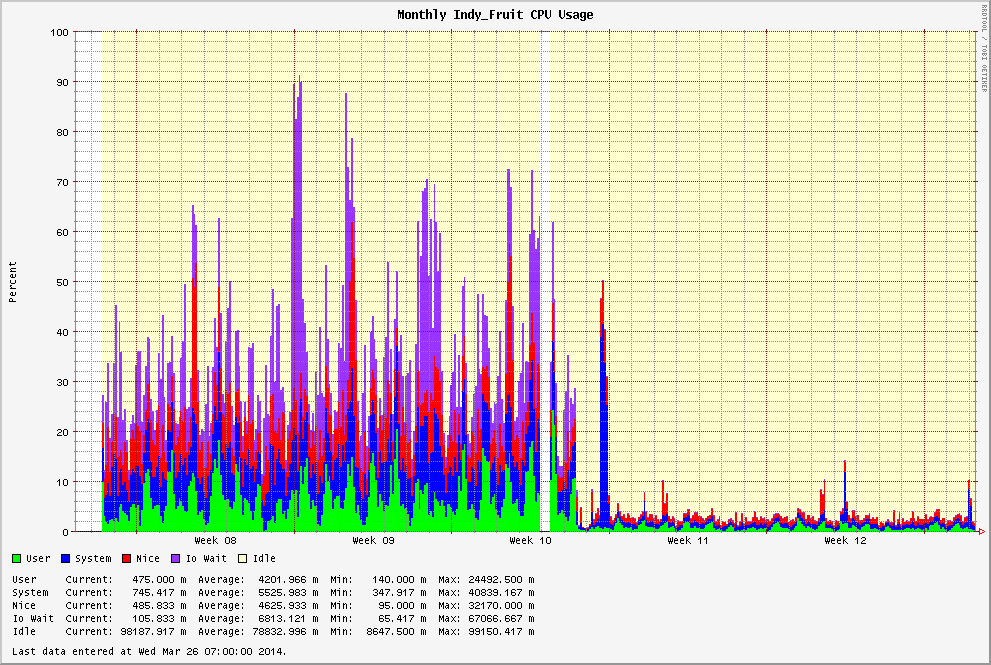 will take care of your problem.

Heavens. What's wrong with MRTG? Or, almost any other performance monitoring tool ever?

Not the answer you're looking for? Browse other questions tagged command-line-interface image graph or ask your own question.

6
Command line: Map network drive
13
Getting CPU information from command line in Mac OS X [server]
4
How to enumerate network computers from command line?
0
Graph data which is only generated once a day or a week?
130
Run Oracle SQL script and exit from sqlplus.exe via command prompt
30
how to generate a random MAC address from the Linux command line
3
CPU Usage while running command in command line
1
Simple tools to quickly capture and graph some arbitrary metrics on a server?