We're implementing Group Policy for the first time at our organization and have some questions about best practices and capabilities. We've already done some work and want to see if there is a better way. 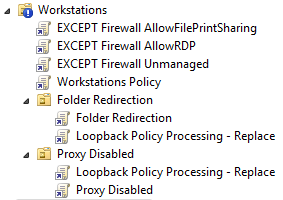 We have Security Filtering set up as follows:

Have one OU for all end-user PCs that has a default policy, then be able to have exception policies that override some of the default policies by adding PCs to a AD group elsewhere. Leave the users under their Users OU.

It would basically be above, except link all the GPs and PCs to Workstations and remove the two inner OUs.

We tried adding all the PCs to the Workstations OU and structured the groups as described in the Our Goal section. Because Folder Redirection (and the Proxy Disabled) settings are User policies we can't get them to apply to the PC. We got it to work but only if we add the user to the policy's security filter in addition to the AD group. Since we want any user who logs into these PCs to be folder redirected we would have to assign it to "Authenticated Users", which would then apply it to all PCs in this OU.

We've tried this in many configurations and can't get it to function how we believe it is intended. Our understanding is that we should be able to have User settings linked to Workstations along with Computer settings. If Loopback Policy Processing is enabled then it should run through all the computer policies, all the user policies, then all the user policies that are assigned to those computers either in Replace or Merge mode.

Is there a better a better way to do what we're trying to accomplish?

Using security group filtering to exempt computers from various computer policies makes sense and I think you're going about it the right way.

I'm not sure that I'm 100% clear on what you're actually trying to accomplish when it comes to the Folder Redirection settings. What's the end business goal? Are these special Folder Redirection computers configured such that users can freely move between them? What is the expected user experience when using a to a computer w/o Folder Redirection applied after they've used one that does (and they can't find their files)? I'm not sure you've completely thought that part through.

It seems like you have an aversion to applying Group Policy to user objects. I'd be curious to know the reason. "Folder Redirection" being applied only when users logon to certain computers is a bit unconventional. Speaking more generally, Loopback Processing of Group Policy isn't the norm, though I'll admit that I use it pretty frequently. Diving in w/ Loopback Processing right out of the gate is a bold move, from a learning perspective.

To speak about Folder Redirection in particular, I generally find that Folder Redirection works best when it's applied as the default across the organization. Along with Roaming User Profiles it can make client computers virtually "stateless" when it comes to user data. I usually want nearly every user to be able to go to nearly any computer, logon, and have access to their files and user settings.

That's not to say that there aren't computers that I might use Loopback Processing to "exempt" from Folder Redirection (and that I might force local profiles only on), but these would be the minority and the exception, not the default. (Kiosk computers and dedicated single-task computers, for example.)

Do most organizations keep all workstations in a single OU (like we're trying to do), or do they split it out (like we have implemented)?

I've seen both, in practice, but I find the "let's pile all the computers in a single OU" to be unwieldy, often resulting in excessive use of filtering of Group Policy application by security group membership. I've never done that, personally. If nothing else, I'll still break out client computers into OUs that describe their physical location just to make things easier to find.

After satisfying your delegation of control needs, the second design decision for an OU hierarchy should relate to application of Group Policy. I prefer to use OUs, whenever possible, to control application of Group Policy because it eliminates the need for security group filtering (and, in so doing, eliminates the possibility of forgetting to populate a computer's security group membership). There may be GPOs that need to apply to a "scattershot" distribution of computers in an OU hierarchy, and that is the best place to use security group filtering.

Do the type of exceptions we want to make even make sense? The Firewall ones work fine since they're Computer policies, but that system breaks down when we want to apply user policies to all users who log on to these PCs.

Your understanding of Loopback Processing seems to be correct, based on the articulation in the last sentence of your paragraph on the subject. To be clear about it: Loopback Processing can work just fine. I use it fairly extensively at a couple of Customer sites for nearly all their computers.

Are there any tools other than GPRESULT/RSOP that are good for troubleshooting this type of thing?

I find those tools useful, to be sure. Occasionally, if I feel I'm having trouble with an individual Group Policy Client Side Extension (CSE) I might enable debugging output (either using the GPSvcDebugLevel setting in Windows 7, or the UserEnvDebugLevel or RunDiagnosticLoggingGlobal settings on Windows XP).

Mainly, I think it's important to be able to conceptualize the Group Policy application process in your mind. I think that the "modeling" and planning functionality in Group Policy Management Console is a crutch to prop-up sysadmins who are too lazy to just learn how the product makes policy application decisions.

The algorithm for determining Group Policy application for a given Computer or User object (which I'm calling the "subject") is as follows:

When Loopback Processing is enabled in "Replace" mode you just treat the OU where the computer being logged-on to resides as though it was the location of user logging-on and build the lists of GPOs accordingly. When it's in "Merge" mode you build the lists for the user in their own OU first, then start again at the top of the domain and, adding to the already-built lists, add GPOs that are linked at the top of the domain and moving down each OU in the hierarchy toward the computer object.

You can calculate the Resultant Set of Policy from those lists using this procedure:

That's it. That's the Group Policy application algorithm. (It's implemented slightly differently in the product but this method is functionally equivalent.) There's nothing much to it, really.

I taught certification classes from the "Microsoft Official Curriculum" at a community college for a number of years. I found that once students understood this algorithm the "light would turn on" and the number of questions I got about "Why is this policy not applying?" dropped-off to nearly nil.

Can anyone recommend any videos/blogs/experts to look up to learn more about GP best practices? Does Microsoft have this documentation somewhere? It seems to be hard to find.

In terms of Active Directory design, documentation targeted at Windows 2000 Server and Windows Server 2003 is still perfectly valid. The basic functionality and factors that impact design decisions for an Active Directory structure are the same today as they were when AD was released.

Likewise, Group Policy hasn't changed dramatically. Yes, the specific settings that Group Policy can influence have changed, but the rules that govern the application process are the same, though some things had their names changed ("No Override" became "Enforced", for example) and and features were added (like WMI filtering). All the basic concepts are still valid.

Most Group Policy documentation and reference websites I've seen seem to get mired down in "Oh, gee-whiz look at all these exciting settings you can apply" goggling and treats learning about the application process as some afterthought that you just use GPMC modeling to handle. That's backwards thinking, to me. Once you understand how the GPOs are actually applied you can dig into the settings. (Learn how to start the car first before figuring out how the sound system and power windows work. Sure-- the convertible top is flashy, but it won't work if you can't start the car.)

Here are some Microsoft resources relating to Active Directory design that I think are reasonable:

Reference material aside, I think it's very important to do experimentation and testing, both to get familiar with the feature-set of the product and to validate your design.

Provided that you're working with a set of isolated OUs and "throwaway" user and computer objects you can "play" with Group Policy in your production domains with impunity (at least for client computers-- for servers and, especially Domain Controllers, you might be better off playing in a test environment). You can simulate the top of the domain w/ a "Block Inheritance" OU, if need be, and build up an entire simulated environment under it. (You would have to make a simulation Site object, too, if you needed to simulate Site-level Group Policy... hardly anybody, other than me it seems, appears to use that, though.)

Aside: Zow-- after nearly 5 years of using Server Fault I finally have time and the occasion to write down my GPO processing lecture from my old community college class. So, let's see here-- I've written the IPv4 subnetting article from my old lecture notes, I've hit 100K, and I'm closing-in on that "Legendary" badge.

My mission here is nearly complete.