Windows Server guest in vSphere has APIPA address after restart

I have a troublesome Windows Server 2008 R2 VM in a vSphere 5.5 environment which is starting up with an APIPA address (169.254.0.0/16) on its interface instead of the statically preconfigured IPv4 address. Disabling and re-enabling the interface (either through devmgmt.msc or ncpa.cpl) helps with restoring connectivity, just as does disconnecting / reconnecting the virtual adapter in vSphere:

It is not restarted all that often, so it is difficult to tell when the issue actually started showing, but we noticed it this week after the tools upgrade. The first restart after Tools installation had no connectivity, subsequent restarts did not change anything in this regard. Other guests with a similar history indeed did have trouble with connectivity on the first restart after the tools upgrade, but subsequent restarts were okay.

The Windows event log shows nothing unusual or driver-related on startup apart from entries of starting services indicating that the host has no IP connectivity. The VM's "Tasks & Events" tab of the vSphere console has no suspicious entries either.

Is this really related to the Tools upgrade? How would I fix it?

Edit: I am aware of vmWare KB 2012646, it basically suggests connecting / disconnecting the adapter and checking the registry for APIPA configurations on interfaces. I have done both (no APIPA-configured entries are present in the registry on the machines in question). 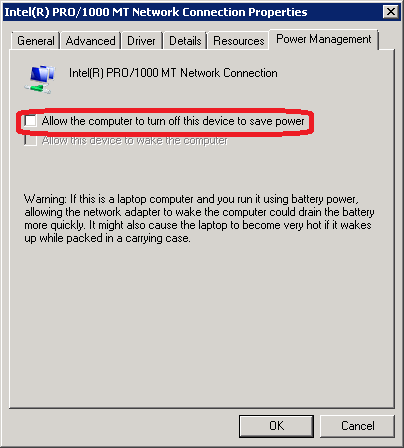 and recent restarts went without networking issues. I do not know for sure if it is causality or just coincidence, though - other things (like the vSphere patch level) might have changed in the meantime without me knowing.

Check this solution it has worked for me-

Type below command in cmd of your vm-

Restart the machine and check

Try "netsh int ip reset" to reset the IP stack, re-assign the static, reboot and see if it sticks?

Not the answer you're looking for? Browse other questions tagged windows-server-2008-r2 vmware-vsphere or ask your own question.

0
vSphere Upgrades Question
0
After upgrading vCenter 5.0 to 5.0 U1, Server and Client are still reporting old version
2
An error occurred while quiescing the virtual machine
2
Is it possible to edit the settings on a virtualized vCenter server?
0
vSphere client cant connect after restart
102
Windows Server restart / shutdown history
2
VMware customization not working when creating Ubuntu VM from template
0
How to correctly set up VMware tools on Ubuntu 14.04 LTS?