I know that typically electronics draw only as much current as they need. Is this the case with UPSs? I have a 120 volt, 30 amp circuit, and am replacing the UPS plugged into that circuit with a lower wattage UPS. This UPS has a 15 amp plug. Is it safe to use an adapter to do this?

You should be safe.

It is always OK to put a lower load on a higher rated receptacle. (At the proper voltage that is. Don't mix 230V and 115V).

Just think of it this way: If it wasn't OK nobody could plug a phone charger (about 2 Amp max) in a standard wall-outlet (10 Amps or more).

And for the record: I am a qualified electrician.
Even though it's been over 20 years since I worked in that field, the laws of electrical physics haven't changed.

I still recommend you have a electrician sort out the converter plug or cable. The cheap stuff you can buy online is often of shoddy quality. If you buy it yourself get it from a reputable source.
An UPS for, presumably, important equipment is not the place to skimp on quality.

But yes, you can do this. It's possible to just buy an L5-30P-NEMA 5-15R pigtail adapter online or manufacture your own. However, I'm assuming you have plentiful 5-15 receptacles available to you. Is there a reason you can't use one of those instead? 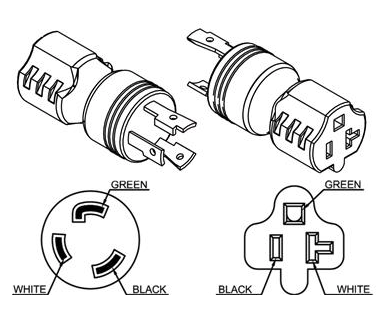 All you're taking about doing is plugging a 120V device into a 120V circuit, using a plug adapter you can purchase off the shelf.

For anything beyond this, consult a local licensed electrician.

If this wasn't safe, you couldn't just buy the adapters off the shelf. But you can buy these kinds of adapters:

Your UPS isn't going to draw any more current through a 30A breaker than it does through a 15A or 20A breaker.

All of your circuit breakers are clamped directly onto the fat aluminum buses in your service panel and subpanel(s), which are in turn directly connected to the fat cables that connect directly to the windings on the step-down transformer coil on the pole outside your home or office.

Essentially all your circuit breakers (or fuses) do is protect the wires downstream from them, by cutting the power when more current passes through them than the wires can carry without getting too hot. Have you ever noticed how thin the high voltage wires on power poles seem to be? They are air-cooled, not closed up inside walls in buildings. Circuit breakers are there to prevent fires. When current gets too high, electrical resistance in the wire increases, the wire gets hot, potentially extremely hot, and buildings burn down.

But again, the breaker doesn't affect how much current a device draws. It just cuts the circuit if the cumulative load passing through the breaker is more than the wire is rated to handle. You have a 30A breaker, in this case, protecting #10 wires, so barring some kind of equipment failure you're not going to have a fire.

And you won't damage your UPS, either, because, the voltage potential on that circuit is 120V, which is exactly what the UPS is designed for. It's only going to pull as much current (Amps) as it's designed for, and also has its own internal overload protection (it's UL listed, right?). You could attach it directly to the bus bars in your service panel and it would function without burning up (not advised for all kinds of other reasons, of course).

The breakers (or fuses) do not modify the power in any way, except possibly through a tiny bit of voltage loss to thermal inefficiency (like how an old incandescent light bulb uses more energy producing heat than it does producing light). The step-down transformer on the pole outside is where the power is modified. That's why you get 120 Volts in your outlets instead of the 17,000 Volts that is energizing the local distribution lines.

GFCI and arc-interrupt breakers don't modify the power that passes through them, either. They just detect and trip the circuit under additional conditions:

Is it safe to use an adapter to do this?

Yep. An eletrical supply house would have this. You should be able to find one on the Googles too.

But my take on that is that the Amps are a like a maximum load you can bruden the circuit with. What's more important in this case (with my non-electrician knowledge) is that your new UPS can deal with 120 volts. It's most likely the case quite honestly.

I don't think you will find adapters for this, I believe the point of twist type plugs is to secure the connection physically. Having an adapter would pretty much defeat the purpose.

I would get an electrician over just to change the receptacle.

This UPS has a 15 amp plug. Is it safe to use an adapter to do this?

It LIKELY is safe, but the UPS fuse LIKELY is OUTPUT - and the UPS can suck a lot more power because it msut deliver it's maximum load AND LOAD AT THE SAME TIME. The documentation (of the UPS) will have requirements for the input circuit.

If you're going for an adapter, change the breaker for a 15A breaker. All risks are then avoided. That's a $5 part. If you can't fit the 10 AWG wire in the breaker, splice it with a 14 AWG wire using a suitable wire nut.

Dedicated circuits (circuits with a single outlet) are supposed to have a circuit breaker that protects not only the wire, but also the appliance connected to it. Since your "appliance" is your UPS rated at 15A, it should have a 15A breaker protecting it (or at the very least, a fuse built into the adapter).

The same applies to built-in appliances. For example, a 30A cooking top on a 40A or 50A circuit will usually require a 30A breaker. This happens commonly when a stove receptacle has been repurposed for a cooking top, after a remodel or renovation. Sometimes, the manufacturer will state that connection to a 40A or 50A circuit is allowed, but in the case of 15A devices, it will almost always say that the device should be connected to a 15A circuit with a 15A over-current protection.

Not the answer you're looking for? Browse other questions tagged ups electrical-power or ask your own question.

6
APC Smart-UPS: remote power shutoff?
2
PDU With Configurable AMP Limit
2
Correct UPS and PDU sequence
5
UPS for 30A service to server racks
0
Can you exceed power rating on a UPS with additional battery packs
0
Can I safely run a server with redundant power supplies off of a standard 15 amp outlet?
0
How to protect 15-amp circuit from UPS with 20/30-amp draw
2
Nema 5-20 Female to Nema 5-15 Male Power Adapter for UPS: safe?