I want to connect liferay to zimbra in Virtual Box and I need to fill this form :

![Capture of liferay try to connect to ldap in VB] 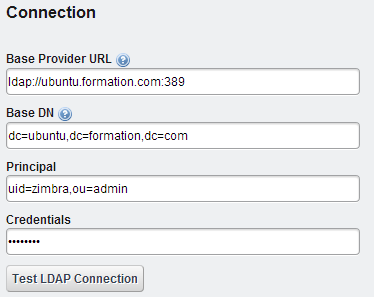 I got the url and password from the output of this command :

please I want to know if the other information are alright ??

Also, your principal is likely incorrect. The value of zimbra_ldap_userdn is probably what you should use, by default it's uid=zimbra,cn=admins,cn=zimbra, which is likely why you can't connect now. You could also use/create another appropriate DN within zimbra's LDAP, but I'm not sure how well that would be handled by upgrades (more the relevant ACLs, rather than the dn itself).

Not the answer you're looking for? Browse other questions tagged ldap openldap zimbra liferay or ask your own question.