How many power circuits do I have in a rack?

I'm planning to get some colocation space from someone in my area, and like most companies that offer colocation, ask about power supplies (of course) in the quote form.

So, basically I need a 110V-15AMP circuit for each 4Us of hardware. But they offer a maxiumum of 4 circuits; as I'm pretty sure this is a standard, what does it mean? Does it mean I get 1 circuit per U, or 1 circuit per rack?

It would make no sense to just offer one per rack (42Us with just 4*110V-15AMP?!), but I'm unsure exactly what to expect as far as power in a rack in a datacenter.

The servers for colocation are ASIC hardware. To be more specific they're Bitmain AntMiner S2. Each unit takes 4Us, with an integrated PSU that supplies 1000-1100W. So, speaking of space, every rack should be able to contain up to 10 units.

Typically, co-location providers build out the rack electrical on-demand to customer specifications. Due to the variances in provisioning and client requirements, it doesn't make sense to waste the effort of pre-provisioning power until the rack space is sold.

New racks... no power feeds (I had to wait 12 hours for Union electricians) 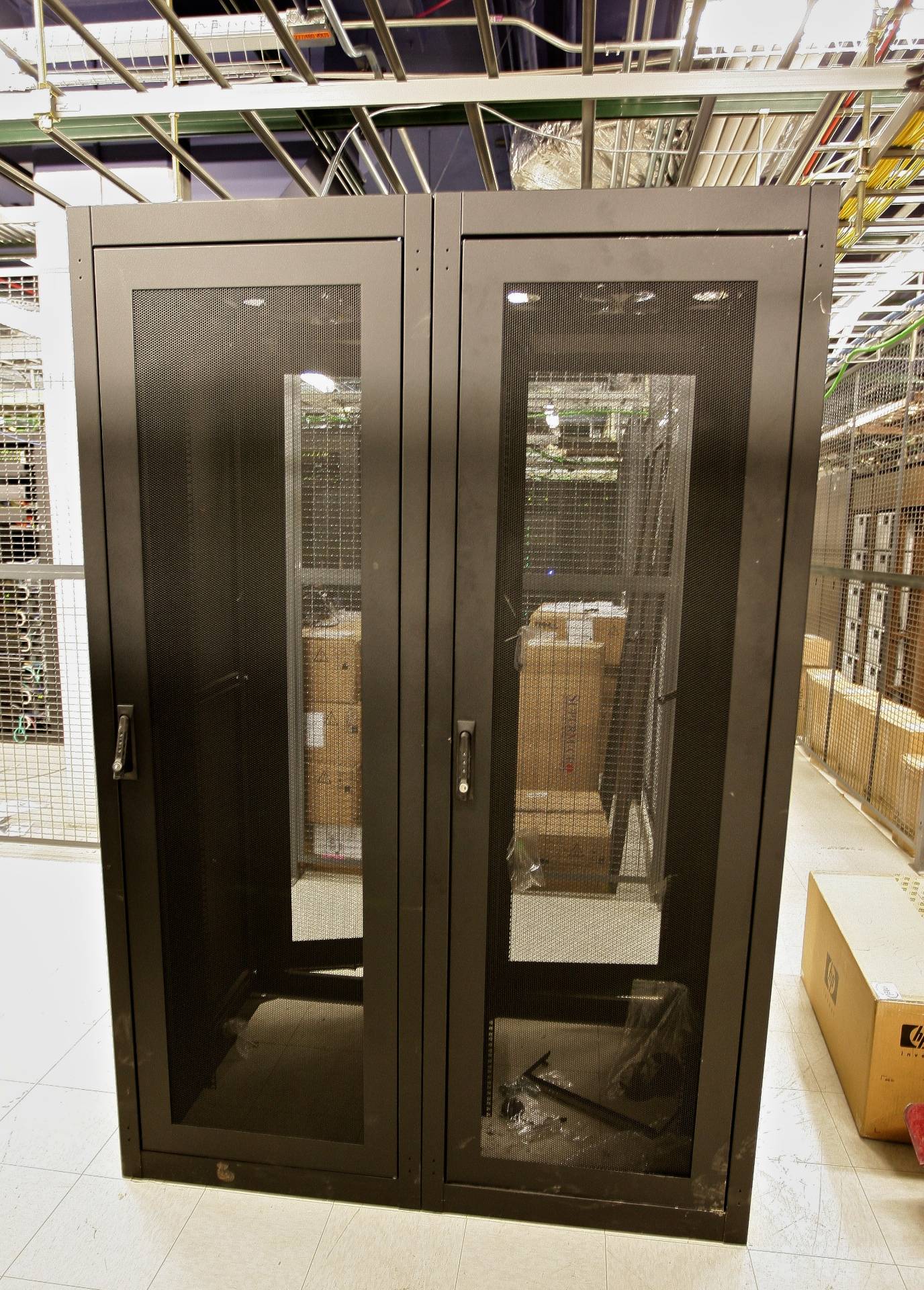 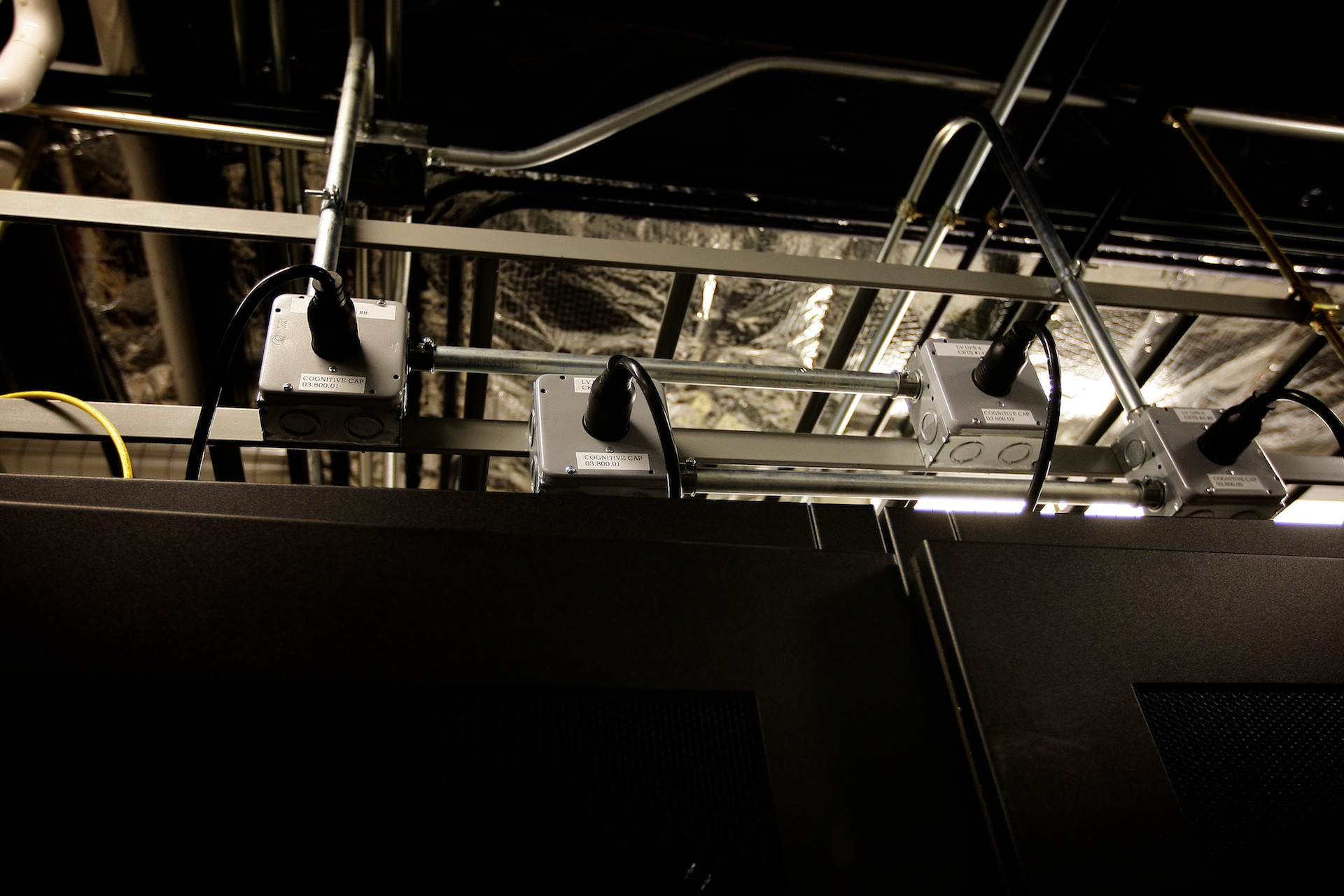 You seem to have another question about sizing power. What do you mean by 1000W per 4U? You should list the hardware you intend to use in a more understandable form.

In terms of power density, data centers are rated for a certain amount of cooling and power per square-area. So unless you're in a high-desity facility, it's likely that you wouldn't be able to fill a rack with servers. You'll run out of power and cooling allotment well before you can fully populate the rack.

Power is traditionally delivered on one or two feeds per rack, and is rated at a certain Amperage. Electrical code typically limits you to the use of 80% of the circuit's limit. The power feeds can be A/B redundant, to which you'd only be able to use 40% of the capacity of each circuit...

But again, you may not even want redundant power or be using equipment with dual power supplies. So this goes back to what you wish to install at the colo. If your servers collectively consume less than 1000W, you can get by with 1 or 2 20A or 30A circuits. Looking at the Netelligent configuration tool, they seem flexible and willing to provide whatever you need.

My colo power utilization graph. I hover at 75% of the circuit's capacity. 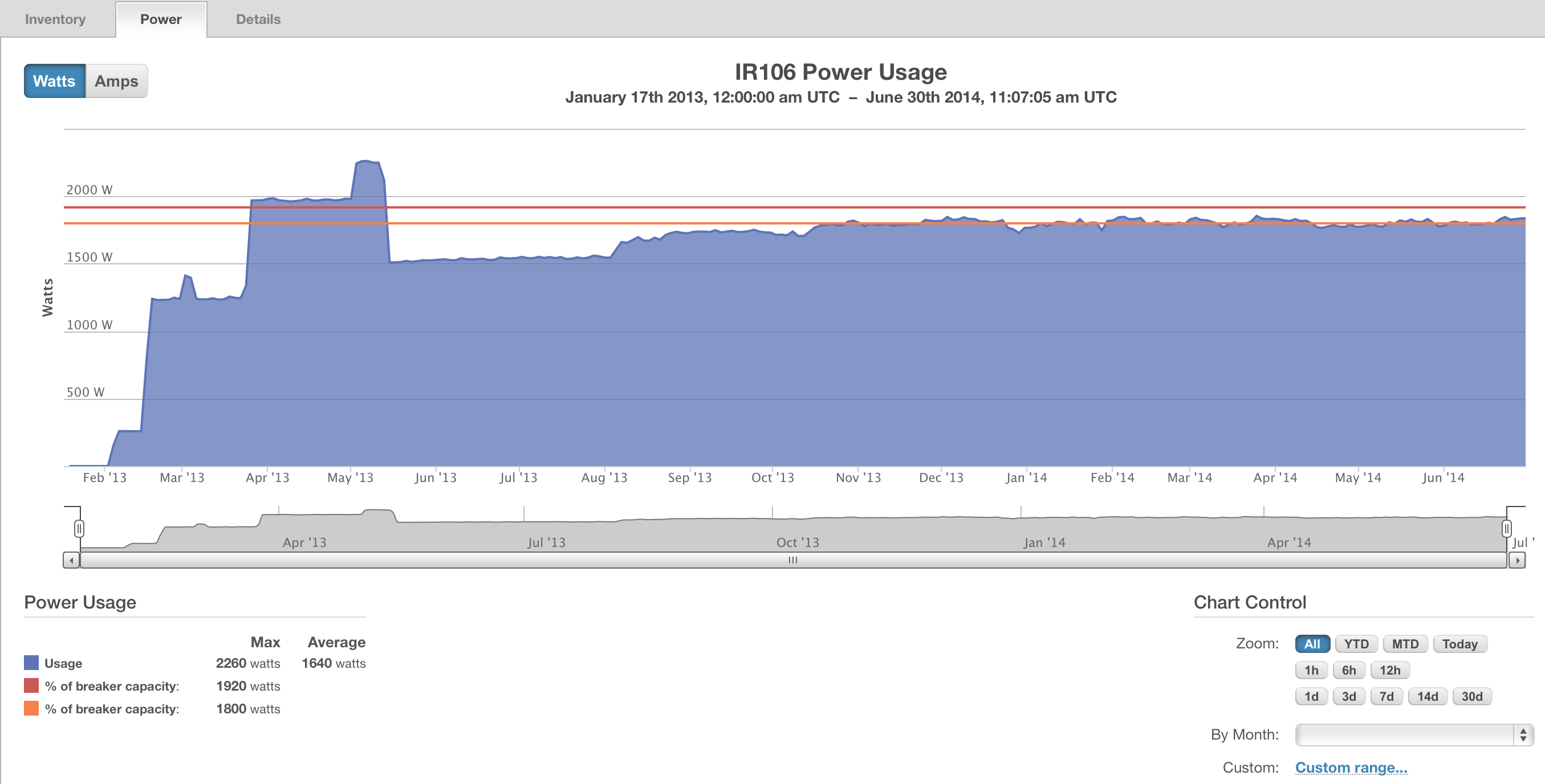 You have a very unique use case in that you'll be using specialized ASIC Bitcoin-mining hardware that has a known power consumption rate.

In this case, I would opt for larger circuits. You'll want 30A circuits, and can possibly run up to three units per circuit. Likely only two per. Real measurements show these running at 8.7A per unit on 110-120V circuits. 208V is an option at the colo, but you'd need to ask the datacenter about their efficiency and how they're providing their 208V.

With four FAT circuits, you could potentially accommodate 10 units, but you'll likely have to buy multiple racks to handle cooling and thermal concerns. I mentioned that colo facilities are rated for a certain density; often 4,000-6,000W/rack.

At this point, tell the potential colo provider exactly what you have and intend to do, and they'll make it happen and give you an accurate outline of cost/space/cooling/power variables. 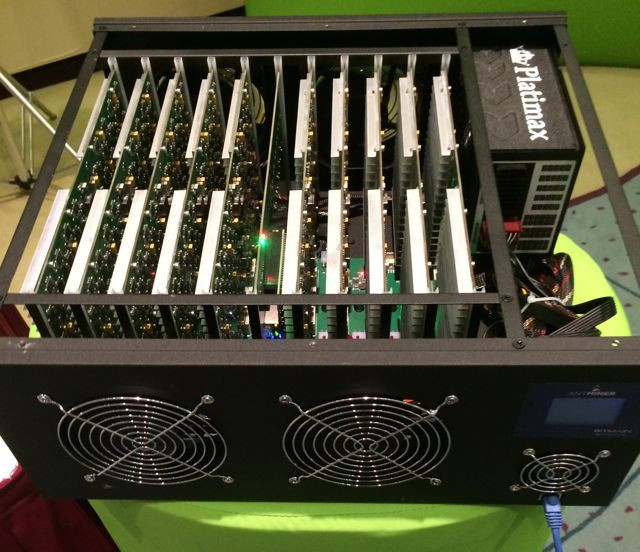 If you are looking to put 10KW in a single rack, power is only going to be 1 of your worries. Heat Rejection is going to be the other. Rack power is determined by the PDU(s) that are installed in it. if you are starting to pull >1kw per outlet you would probably want High Density PDUs and to feed the antminers 208V as opposed to 110/120V (less amps more volts == smaller wire sizes). Looks like the antminer pulls around 5.2A at 208V. putting 10 of them in a rack would be 52A at 208. Well within range of most Blade Center type PDUS.

When they say there are 4 circuits per rack it just means 4 individual lines of power, probably with individual switches for each line. These are typically wired into Power Distribution Units (PDUs) that branch off into multiple electrical outlets within the rack.

It's also a way for a power sucking piece of equipment to spread its amp-load over multiple circuits. If you have an 80 amp requirement you can't fulfil that on any one circuit but you can spread that over 4x 30 amps circuits.

Not the answer you're looking for? Browse other questions tagged hardware electrical-power datacenter power-supply-unit colocation or ask your own question.

12
Datacenter Power requirements. A=W/V… I must be doing something stupid
8
Which is better - 30 AMP 220V circuit or 60 AMP 120V circuit
0
Switching from 120v to 208v power
0
Server/Power supply AMP usage
9
Maxing out both PDUs in a rack with redundant power
5
UPS for 30A service to server racks
5
Using more than 80% power on a circuit in a disaster scenario
9
UPS Requirements - Max load or actual load?
2
Estimate power and cooling for server room
0
Can I safely run a server with redundant power supplies off of a standard 15 amp outlet?