better way to loop through a list of servers

I regularly do things where I loop through a list of servers to take some action. For example:

I'm wondering (from a shell perspective) if there's an easier way of doing this than cat servers.txt

Yes I know about tools like mcollective, capistrano, etc - I'm often doing this to fix up mcollective problems :-)

My quick and dirty... where servers.txt has a series of hosts or IPs, one-per-line.

I use ClusterSSH.
It opens up a lot of small shells, and you can type to all of them in the same time. Really handy when you want to execute the same command on a lot of servers, but still see the output.
I use it like this: clusterssh $(~/get-servers.sh), but obviously you can do something like clusterssh $(cat servers.txt)
The result looks like this: 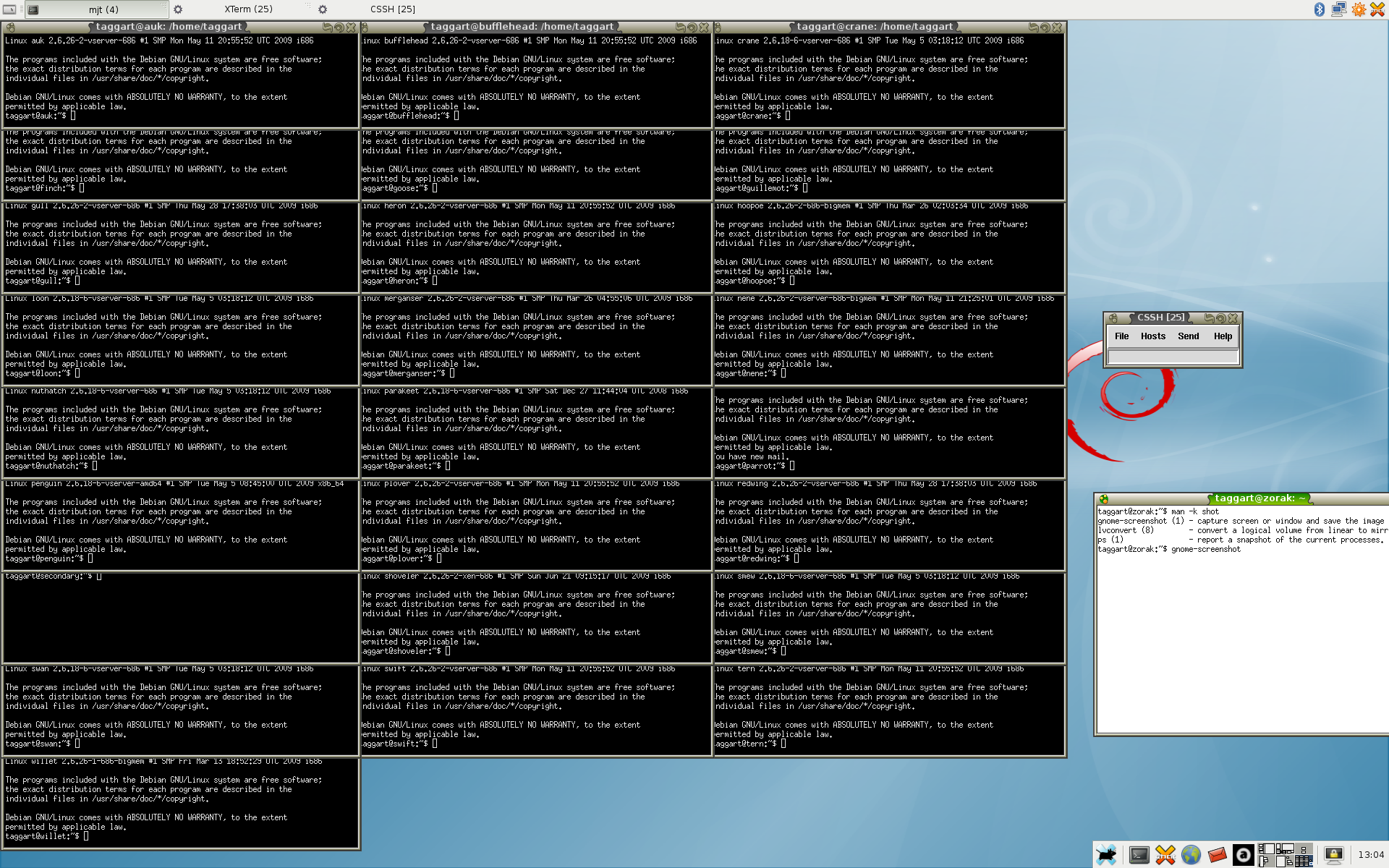 It's also available as a Debian package.

To execute a simple task across a wide range of servers without using any tool designed for this purpose, regardless they require previous infrastructure or not, you can use a simple shell script called mussh, distributed as a package in many distributions.

You can call it with a list of hosts, a list of commands, store both things in files, and quite a few more options, like ssh-agent integration, proxy support, ... Check the manpage for all the details.

An example could be as simple as:

Please do yourself a favor and use something designed for this. You already know about mcollective, but you and I both know that it needs some infrastructure to work. As do puppet and chef.

clusterssh, parallel ssh and dancer shell are small simple improvements over a shell for loop. They don't need more infrastructure.

But there's also ansible, which let's you do that, but also write reusable "playbooks" with several steps. It does need python installed in addition to sshd, but in practice I've never had to separately install that, it's always been available.

Ansible is the only configuration management system I've tried that also works well as a deployment and orchestration tool (puppet needs mcollective and maybe capistrano/fabric for that, ...)

(Yes, Puppet and Chef and all the rest can be run without central servers, but you need to install packages on the hosts to manage, which ansible doesn't need)

Here is how to use xargs to parallelize these ssh sessions:

You can also add the -n or -f options to ssh to redirect the stdin from /dev/null or put the session in the background. If you have to type a password for each host, then this doesn't help you much, but if you are using ssh keys then this works very nicely.

I generally fall back to using that if/when our mco or puppet setup is broken. It is another dependency to manage, but totally worth it if you have large fleet of boxen to manage - with the added bonus of being able to choose how many machines to work on in tandem/parallel, or even doing one at a time, as you're used to with bash.

Undeleted my answer. Although it's not really clear what you're asking for.

There is a project called parallel SSH which provides parallel versions of ssh, scp and rsync.

So the advantage is that you don't need to do any shell script you just provide it the list of servers to run the command on and it'll do it in parallel.

This is great if you've got a long running set of ssh commands to do as it will do them all in parallel offering a potentially big speed up.

Not the answer you're looking for? Browse other questions tagged ssh bash shell mcollective or ask your own question.